Forget the style and all those cliches, this book, written with the wonderment and adrenaline of a committed reporter, captures the drama of 2014 and the men who powered it 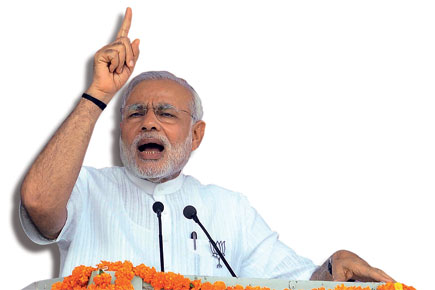 Forget the style and all those cliches, this book, written with the wonderment and adrenaline of a committed reporter, captures the drama of 2014 and the men who powered it

Rajdeep Sardesai is large (by Indian standards), hearty, fizzing with words and information, and blithely devoid of subtlety. That is my impression of the man, one of India’s most prominent TV journalists, and it also is my assessment of his book, 2014: The Election That Changed India.

Do not misunderstand me: The qualities I mention are not bad ones in a man. They make him lively to observe, fun for gup-shup, and a great companion in the pub. I like Rajdeep, and have known him since he was a galumphing undergraduate and Oxford cricket Blue in the mid-1980s. In his book, too, these qualities are not all handicaps. Who would not want a constant volley of information— some of it fascinating, some of it unfiltered—in a book on an election? I had not known, for instance, that Amit Shah masterminded the BJP’s campaign in UP with such microscopic thoroughness that there was one volunteer for every 15 voters in the state. Or that when Bihari chieftain Lalu Yadav invites you for an 11 o’clock meeting he means 11 pm, not 11 am. After his interview with Rajdeep—conducted in a cowshed to broadcast the right ‘effect’— Lalu proceeds to teach the city slicker how to milk a cow. “Tum angrezi logon ko yeh sab seekhna chahiye,” he says, to a Rajdeep who is as comfortable with an udder in his fist as Suresh Raina is with a bouncer leaping at his throat.

Did you like the cricket metaphor in the last sentence? If you didn’t, be warned: Rajdeep cannot resist them. I counted 28 instances of cricket imagery in 350 pages of his prose, which makes for an average of one every 12.5 pages. There are three on page 135 alone: Narendra Modi’s confronting of Manmohan Singh in an Independence Day speech in 2013 is a form of ‘bodyline’; Manmohan versus Modi is like ‘a Pujara v. Gayle battle in a T20 match’; and Advani tosses up a ‘googly’ at a party meeting by suggesting that BJP chief ministers other than Modi (for example, Shivraj Singh Chouhan and Raman Singh) ought to be considered for national leadership. None of those cricketisms is as awful, however, as Rajdeep’s description of Arvind Kejriwal’s meteoric arrival on the political stage as ‘a Sourav Ganguly- like debut.’

But I’m not about to call for the DRS on Rajdeep. Put aside your aversion to clichés, and to writing that is occasionally so slapdash that even an India Today sub- editor would blanch. This isn’t meant to be high literature, and we shouldn’t treat it as such. The book is a sturdy compendium of the events that led up to the 2014 election, as well as of those that shaped its outcome. Obviously, it was written in a tearing hurry, but it has also been written with gusto and self-belief, and the author has drawn liberally on his impressive access to politicians of every ideology, caste and region.

There can scarcely be a neta in India with whom Rajdeep hasn’t had dinner—or a jovial wager, with dinner as the prize. He writes of Mamata Banerjee: ‘For some reason, Didi appeared to have a soft corner for me.’ She offered him a Rajya Sabha seat once, and even cooked dinner for him at her home in Kolkata. ‘The sight of the Bengal chief minister in the kitchen, her crumpled sari tied in a no-nonsense knot, sweat pouring from her brow, rushing between steaming pots of Bengali delicacies was, I must confess, more than a little disconcerting.’ For my part, I must confess to finding Rajdeep’s palliness with politicians a little disconcerting, too. But that appears to be the way of modern Indian journalism, at least as practised by its topmost editors, who seem to spend an awful lot of time ‘dining with people they ought to be dining on’ (to use a phrase by Michael M Thomas, an acerbic American novelist and commentator).

The narrative structure of Rajdeep’s book cannot be faulted, nor can his magnified emphasis on the personalities who made the 2014 election so beguiling. In the history of democracy—and not merely in India—there cannot have been two leaders competing for victory who were as radically unlike each other as Modi and Rahul Gandhi. Rajdeep has known Modi for a very long time, and relishes writing about the many occasions when he hung out with the man in the years before he was elected to office in Gujarat. Modi is a man of steel, a man of ambition, an unforgiving, vengeful man on a mission. Rahul, by contrast, is part milquetoast and part brat, entirely out of his depth in the akhara of Indian politics.

Although Rajdeep does not know Rahul personally the way he knows Modi—and, it should be asked, who really does, apart from Rahul’s own mother and sister (and a putative Latin American girlfriend)?— he is at his most acute when writing about the shehzada (Modi’s derisive term for the Gandhi scion). Ruthlessly, he picks apart the limitations of the man who led the Congress party into near-oblivion, the sheer insouciance of the heir to the throne. How could a man so inept and unprepared have been so cavalier, Rajdeep wonders, even as he marvels at the drive and panache of the man who would put the princeling in his place.

Other players walk on stage, and Rajdeep gives them their due: Kejriwal, Jayalalithaa, Nitish Kumar, Lalu, Mamata, Arun Jaitley, and, of course, Sonia Gandhi. His parsing of Amit Shah is, in my view, the most illuminating part of the book. The full cast of the 2014 election is varied, lurid, and eye-catching, offering the sort of rollicking drama that elections in other, less ungovernable lands simply do not have. Are Indians lucky to have this drama? I’m not so sure, and neither, I think, is Rajdeep. But he does always have the wonderment and the adrenaline of the committed reporter, and the constant, near-toxic high of the incurable political junkie. This book is his big, fat binge.

(Tunku Varadarajan is the Virginia Hobbs Carpenter Fellow in Journalism at the Hoover Institution at Stanford University. He is working on a book on the political legacy of the Shah Bano case, The Divorce That Rocked India. He is a regular contributor to Open)


2014: The Election that Changed IndiaRajdeep Sardesai