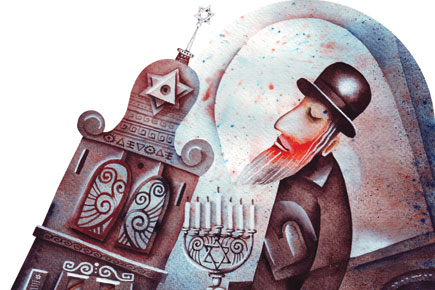 
In the Cold War’s aftermath, as Zionism spread its root, it was not unknown for many Jews to admit to discomfort over their Jewishness. It took various forms of expression, including the famous self-deprecating Jewish humour—that chose self-criticism as a droll defence, that deliberately encroached upon stereotypes as a way of disempowering them, that seemed tired of all the orthodoxies and exclusivity— and a combative assertion over territory that made them both unique and vulnerable to condemnation.

Howard Jacobson, longlisted in the past for the Booker Prize, and has been a novelist and broadcast presenter for over 30 years, wins the trophy this time for The Finkler Question, or really, the Jewishness question. As the authorial voice says, it might be just ‘dead men inhabiting a dead faith’. Yet, Julian Treslove, the main character, discovers in the course of his lifelong association with his closest of Jewish friends that ‘the Jewish faith frightened even the Jews’.

Jacobson weaves the story of three friends, past their prime, widowed and bereaved of love, yet longing incurably for wives lost or loves that never happened. Libor Sevcik is a Czech living in a posh part of London, eternally in love with his departed wife, who voices support for Israel. At 90, he remains a source of romantic aspiration for his former pupil, the 60-something Samuel Finkler, a Jewish pop philosopher who is anti-Israel and part of the many groups best termed ‘Ashamed Jews’. His best friend and rival is the gentile Julian Treslove, a former BBC employee who finds Finkler’s prickly attitude both intriguing and niggling. The Finkler question concerns Finkler people, as Treslove sees them—and is really a Jewish one in his eyes.

Jacobson has said that his novel is a point where tragedy and comedy meet. And this is very much so. There is much in the way of his wit and humour that makes for empathy, understanding and searing insights. It’s dark, with confounding insights, both vexing and untangled.

The story moves in a measured manner to keep pace with events and dialogues among the three friends. Treslove finds that being a non-Jew gives him no immunity to Jewish issues and prickliness. Spurred by an assault and a voice in his ear, he embarks on a quest, seeking Jewishness in himself and inevitably in other spheres as well—political, social, intellectual, emotional and cultural. Through Tresolve’s urge to adopt Jewishness and even romantically involve himself with a Jewish woman, Jacobson highlights the voices of his two friends at opposing ends of the Jewish spectrum—those, like Finkler, who are somehow ‘ashamed’ of their Jewishness, and those like Sevcik, who finds posturing alone doesn’t help.

It is to Jacobson’s credit that the story works well at many layers. His felicity with words and phrases helps him address the pompous, portentous and ritualistic aspect of orthodox religion and its subtle or covert attempts to seek supremacy, and the manner in which man-made religions tend to control our aesthetics, politics, economics, conquests and subjugation of others.

Beyond the arguments of religious identity and territorial rights, The Finkler Question is a book that does not shy away from mentioning the irritable, examining the uncomfortable, and arguing in favour of the reasonable. A novel that blends humour, pathos, melancholy and honesty. The effect is potent and combustible.