The Evidence of Conspiracy 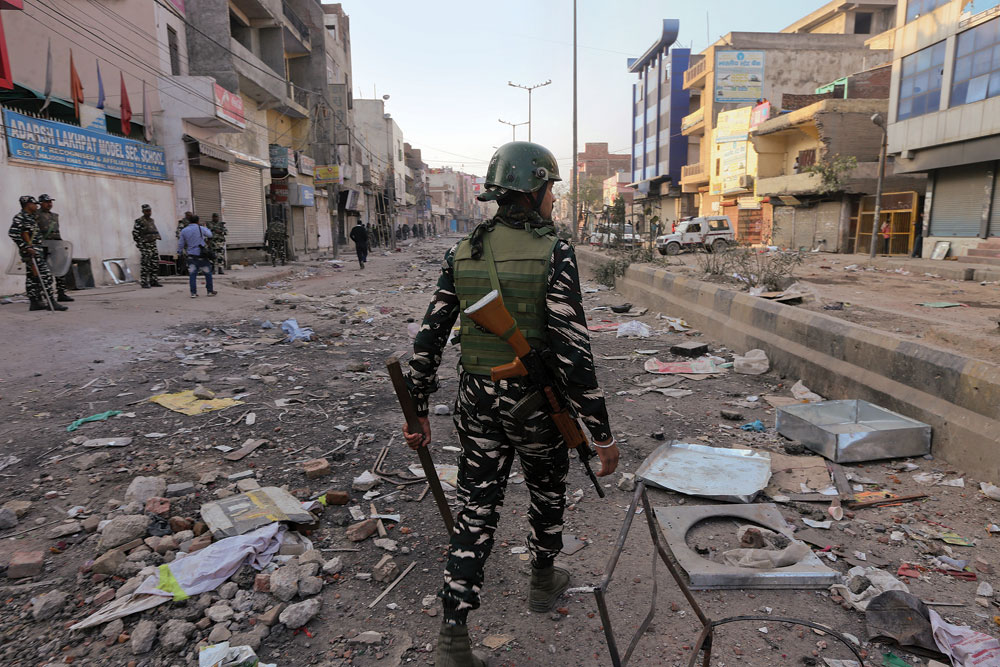 
THE DELHI POLICE have filed several chargesheets in connection with the Delhi riots in which at least 53 people lost their lives earlier this year. In its final report submitted to the court, the Delhi Police’s Crime Branch has accused Aam Aadmi Party (AAP) Councillor Tahir Hussain of planning the riots and being responsible for violence that occurred around his office-cum-residence in northeast Delhi on February 24th and 25th. In the violence on February 24th, a head constable lost his life while a deputy commissioner was seriously injured.

Video footage shot by people around Hussain’s property that surfaced around the riots showed a large number of people on his terrace pelting stones and petrol bombs all around. Afterwards, a large quantity of stones, bricks and petrol bombs, and catapults to hurl these, were recovered from Hussain’s premises. As part of its investigation, the police took into possession four plastic crates containing glass bottles (filled with inflammable material), 13 empty plastic crates used for holding glass bottles, three handheld catapults and one big plastic bottle containing some liquid from Hussain’s house, while 12 glass bottles, three empty cartridges, and bricks and stones were taken from the road outside.

In its chargesheet now, the Crime Branch has claimed that Hussain got an amount of Rs 1.1 crore transferred to fake companies and then got it back in cash. Bank details, say the police, have revealed that Hussain transferred this amount from his two companies, Show Effect Advertising and Essence Cellcom. Six transactions were made from Essence Cellcom, totalling Rs 92 lakh, to Meenu Fabrications and SP Financial Services. From the account of Show Effect Advertising, a transfer of Rs 20 lakh on January 8th is reflected towards a company called Yudhvee Impex. The police have asked for more time to establish the chain of these transactions, but have claimed that it was used in the preparation of the riots.


In its investigation, the police also found that Hussain had got his pistol released from the neighbourhood police station on February 22nd, just before the riots—he had deposited it there earlier in January. Out of 100 cartridges that he bought on his licence, the police have been able to recover only 64, along with 22 empty cartridges. According to police sources, Hussain has so far not given any explanation of how these 22 cartridges were used, apart from the 14 missing cartridges.

In his defence, Hussain had earlier claimed that he had shifted along with his family from this property on February 24th after he had called the police. The police have made two of Hussain’s employees witnesses. They have revealed that, on February 24th, Hussain was present in his office along with five co-accused in the riots and others whom they could not identify. The chargesheet has quoted an analysis of Hussain’s mobile number and said that Hussain was present in and around his house from February 23rd to February 27th. It claims that over his phone he was in touch with other rioters. The other accused in this case include Hussain’s stepbrother, Shah Alam; his friend Irshad; his employees, Rashid Saifi,

Of them, Gulfam was arrested on March 12th, from Delhi’s Nehru Vihar. Upon his interrogation, Gulfam, says the chargesheet, led the police to his rifle and a box containing seven cartridges. His arms licence revealed that he had purchased 200 cartridges, of which 100 were purchased on January 31st. Gulfam, according to the police, has not been able to account for the rest of those.

The police found that Tahir Hussain had got his pistol released from the neighbourhood police station on February 22nd. Out of 100 cartridges he bought on his licence, the police have been able to recover only 64, along with 22 empty cartridges

During their investigation, the police found several CCTV cameras installed at Hussain’s house and office. But forensics was unable to find any recording for between February 23rd and 28th. ‘There is no recording of persons visiting him in his office/house prior to the commencement of riots/during the riots, as if he did not wish the events to be recorded,’ the chargesheet says.

In his defence, Hussain had earlier said that he had made several calls to the police control room asking for help and that his building had just been taken over by rioters. But the police report says he hasn’t been able to explain how his building stayed intact while other buildings around him, belonging to the Hindu community, were destroyed. As an example, the police have recorded the statement of one Pradeep Kumar Verma, who owned the building next to Hussain’s and ran it as a parking lot. His property was totally destroyed, including 44 vehicles parked at the site. Verma, now a witness in the case, has told the police that of those accused, Shah Alam, Gulfam and Riyasat Ali along with some others broke open the shutter of his parking lot and burnt and damaged the cars inside and looted cash amounting to about Rs 20,000. He has identified Hussain among other accused as throwing stones and petrol bombs from the terrace. Another witness, Rajbir Singh Yadav, who was supervising food preparations for a marriage ceremony on the first floor of Verma’s property, has in his testimony said that while the rampaging mob destroyed the food, Riyasat Ali looted Rs 62,000 from him. He has also, according to the chargesheet, identified Tahir Hussain and Liyakat Ali among the mob that indulged in rioting.

IN ANOTHER CHARGESHEET filed in the case of the Intelligence Bureau staffer Ankit Sharma’s murder, the police have claimed witnesses as having seen Hussain ‘provoking and instigating the mob’ against Hindus. Sharma was dragged outside Hussain’s property on the evening of February 25th and his body was found the next morning in a nearby drain. Ten people have been arrested so far in this case.

The police have received flak for skipping entirely the details of a speech made by the BJP’s Kapil Mishra on February 23rd. In video footage of the speech, Mishra is seen standing next to a senior police officer, giving an ultimatum to clear an anti-citizenship law protest site, failing which, he says, they would hit the streets. Though there are clear indications that both sides had prepared in advance for the ensuing riots, many consider Mishra’s speech a tipping point. In a sequence of events offered by the police in its chargesheets, starting from December 13th (when an anti-citizenship law protests outside Jamia Millia Islamia turned violent) till February 25th, there is no mention of Mishra or his speech. Mishra’s speech had invited a lot of criticism and the Delhi High Court questioned the police over their inaction against him and two other BJP leaders.

The police have received flak for skipping entirely the details of a speech made by the BJP’s Kapil Mishra on February 23rd. Though there are clear indications that both sides had prepared in advance for the riots, many consider Mishra’ speech as a tipping point

Civil rights activists have also accused the police of displaying communal bias against Muslims, demanding that all FIRs in the case be opened for independent scrutiny. In their response, the police have termed this accusation ‘factually incorrect,’ saying that the accused in rioting cases are from both communities.