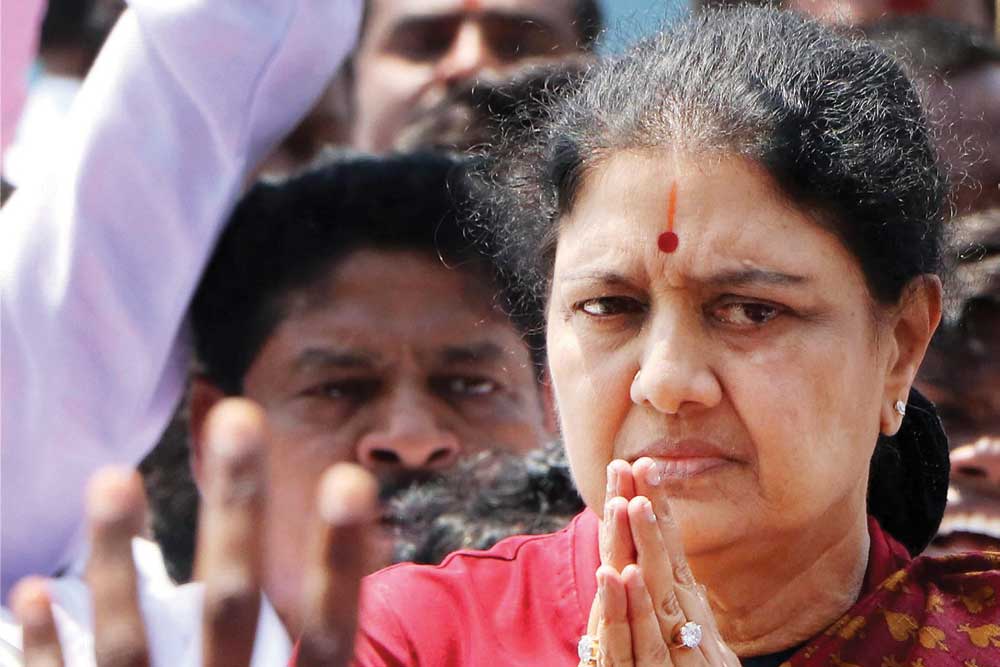 TWO MONTHS AFTER former Chief Minister J Jayalalithaa’s death, the reality of exhausted possibilities in Tamil Nadu is sinking in. The state has seen one self-destructing narrative after another since the death of MG Ramachandran, the sole infallible hero, in 1987. It has vacillated between the two Dravidian parties, castigating the precursor and carrying on a rebound affair with the incumbent in each subsequent election. In 2016, Jayalalithaa became the first to break this curse in three decades by winning twice in a row, but were she to look at Tamil Nadu today, she would despair of her own victory. In the overlong battle for her political estate, power has refracted between an officious meddler with an army of stooges and a perorative redeemer of the seduced masses. And they have each brought on their own self-destruction, VK Sasikala with her unchecked greed and O Panneerselvam by not thinking through his secession from the mother-party.

A day after her conviction by the Supreme Court in a 21-year- old disproportionate assets case, AIADMK general secretary Sasikala, on February 15th, surrendered to sessions judge Ashwath Narayana at the Parappana Agrahara prison complex in Bengaluru along with her co-conspirator J Ilavarasi. Her nephew and Jayalalithaa’s estranged foster son VN Sudhakaran turned himself in later in the day. The verdict delivered by justices Pinaki Chandra Ghose and Amitava Roy, which restored in full the trial court conviction of September 27th, 2014, was immediately hailed as a milestone in the fight against corruption. Justice Roy felt compelled to point out in a supplementary note to the judgment that ‘the perpetrators of this malady (of corruption) have tightened their noose on the societal psyche’. ‘The corrupt and the corrupter are indictable and answerable to the society and the country as a whole,’ he wrote. Two days later, however, it was politics as usual in Tamil Nadu, with the new legislative party leader chosen by Sasikala, 62-year-old Edappadi K Palaniswami, a senior leader from Salem district, being appointed Chief Minister- designate and asked to seek a vote of confidence within 15 days.

The verdict should have been cathartic for many reasons. First, it shatters the halo around Jayalalithaa and forces Tamil Nadu to confront the reality of its ‘Amma’. Even if it comes posthumously, it brings back flashes from the Directorate of Vigilance and Anti-Corruption (DVAC) raid of her residence in 1997 that yielded riches stowed away like a teenager’s sinful cigarettes in an eviscerated dictionary. Forgiveness comes easy to a state forever indebted to her welfare schemes, and a circumstantial history of modern-day Tamil Nadu may yet crown her the tallest leader of her times, but there is an air of disaffection with Dravidian politics today that may change the way the next generation votes.

Second, the conviction of Sasikala should have come as a relief to the people of Tamil Nadu, who have made no secret of their visceral dislike of her. By prematurely seizing power and propping herself up on the shoulders of her kin, she incurred widespread odium and remained unaffected by it. The judgment curtailed her chief ministerial ambitions in the nick of time and showed her her rightful place—as prisoner no. 9234 in Bangalore’s central jail. With Sasikala in exile, the AIADMK could have potentially recovered from its moral morass and reinvented itself as a self-reflexive party without baggage. O Panneerselvam, once mocked as a Teflon-coated chief minister, had, with his inspired riff on all that was wrong with Sasikala’s leadership, emerged a hero standing tall in the dissolute political space of Tamil Nadu. But while eight maverick MLAs followed their conscience to his faction, Palaniswami and 123 other MLAs, unwilling to give up their seats, craving the security that Sasikala’s money power must bring, and perhaps a little grateful for her patronage over the years, decided to follow her writ. Either that or the bonding sessions at Golden Bay Resort in Kuvathur, where they have all been lodged for days fearing mass defection to the OPS camp, really worked. An FIR has been filed against Palaniswami and Sasikala after SS Saravanan, an MLA who has said he scaled the walls of the resort dressed in shorts and t- shirt, lodged a complaint alleging that the MLAs had been kidnapped by Sasikala.

Third, the Supreme Court’s verdict, and Justice John Michael D’Cunha’s before it, could become the generative grammar for honest Tamil politicians to come. It could force the DMK, which is trying to resurface from the taint of the 2G scam, to govern ethically should it come to power in the next Assembly election. It could arguably empower the Tamil masses, whose resolve and grit were in evidence at the recent protests in Chennai, to boycott greedy politicians.

The ultimacy of the verdict felt a lot less powerful than it should have, with Sasikala and her egregious courtiers retaining their control over the AIADMK

Yet, the ultimacy of the verdict, the euphoric moment of reckoning Tamil Nadu had waited for, felt a lot less powerful than it should have. For, Sasikala and her egregious courtiers continue to have near-total control of the AIADMK, lingering like sticky sap from a cut. Unlike Jayalalithaa who did not care to name a successor, Sasikala has formally handed over the reins of the party to her nephew, former MP TTV Dinakaran, who incidentally narrowly escaped conviction in the DA case. He had been arraigned as accused No. 5 in a supplementary chargesheet but did not face trial as evidence couldn’t be marshalled against him. He is also a co-accused in several Foreign Exchange Regulation Act (FERA) violation cases along with Sasikala. The new deputy general secretary—and for all practical purposes, Sasikala’s stand-in while she remains in jail—of the AIADMK was among the dozen party members related to Sasikala who were expelled by Jayalalithaa in 2011. Ironically, he was accused of interfering with government administration, and now has the official authority to do so. Following his appointment, senior party leader V Karuppasamy Pandian quit as organising secretary and issued a scathing statement protesting Sasikala’s treatment of the AIADMK as a ‘family property’.

For Sasikala, who has been refused home-cooked meals and VIP treatment, prison and a thwarted chief ministership are clearly not the end of the road. For someone who has never held public office before, the 10-year ban on contesting elections surely does not mean scrapping her dreams. She made her intentions public by thumping on the slab of Jayalalithaa’s memorial before heading to Bangalore, a gesture that can only be interpreted as refusal to capitulate to a deadening fate. The Doppler effect of her thumping continues to reverberate through social media memes, but she meant it in all seriousness. No power on earth could distance her from the AIADMK, she declared a few days ago. And by that, she meant not just the heretical sect that attempted to upstage her on a Tuesday night, but also the possibility of a conviction. “This is a woman who has controlled Tamil Nadu politics from behind the scenes for years. Prison is not going to make her stop, especially when there is no authority above her. She has always preferred to operate without accountability,” points out political analyst Gnani Sankaran. This is neither an exit, nor an entrance, but merely a part that must played, to paraphrase Shakespeare.

There is still the possibility of an upset if the Election Commission declares Sasikala’s election as party general secretary void, in which case Panneerselvam will have the reins back. Disabused of his relevance, he must feel expectations crumbling around him. For a while, he was the source of a passing optimism among Tamils, a fiery orphan who asked for more. As the crowds at his Greenways Road residence disperse, barely a day after hailing the judgment against Sasikala as an end to their worries, he calls plaintively for the “dharmic war” to continue. Meanwhile, the DMK, with 89 MLAs in a 233-strong Assembly, is watching patiently, hoping for a mid-term poll that may well tilt the votes in its favour.

Some days ago, walking down Marina beach, I met a fishmonger who called Sasikala a “hiccup” in the history of democracy in Tamil Nadu. “It will pass,” she said, rather optimistically. “If not now, then the elections will surely wash it away.” The scourge of the AIADMK, however, is also the force holding together the bricolage of a party deprived of its icon. Incomprehensibly, Sasikala’s supporters now hail her as a martyr, even if they know that had she martyred her own chief ministership earlier, Panneerselvam may never have defected. “Sasikala’s government is not Amma’s government, it can never be. For our own dignity’s sake, we have to support OPS,” C Ponnaiyan, senior party leader, former minister of finance and one of the founding members of the AIADMK, told me when I asked him why he supports Panneerselvam. As Sasikala’s MLAs shuffle out of Golden Bay Resort and return to face the world, they do not look relieved. Perhaps they are clutching their veshtis around them a little tighter, knowing they have squandered away their dignity. “The only reason the MLAs are united is that they don’t want to face premature elections,” says S Thirunavukkarasar, the Tamil Nadu Congress Committee president. “I hope they prove [their] majority in the House and ensure stable governance. I don’t expect much change, since only two ministers have defected.” That is indeed the story of Tamil Nadu over the past few weeks, where everything has changed and yet nothing has changed.