One Giant Bite for India 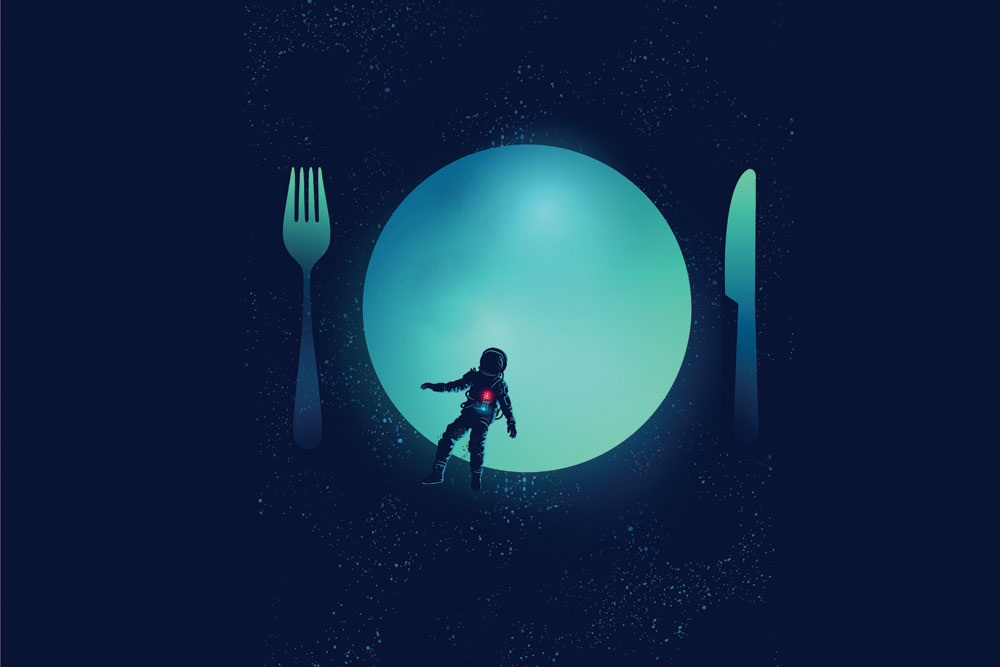 
IT COULDN’T GET more real. In the 1978 comedy science fiction series The Hitchhiker’s Guide to the Galaxy, creator Douglas Adams profoundly states: ‘Time is an illusion. Lunchtime, doubly so.’ With cutlery, food and the consumer-astronaut floating around in a zero-gravity, also known as microgravity, environment, the proof of the pudding literally is in the eating. It’s a challenge hounding space food scientists and nutritionists since Yuri Gagarin, the first man in space, ate from three 160 g toothpaste-type tubes, two of which contained servings of puréed meat and the other, chocolate sauce, aboard the Vostok 1 in 1961. Today, astronauts have greater variety up there and many request a personalised menu from the list of available foods. So recently, when the Mysuru-based Defence Food Research Laboratory (DFRL) under the Defence Research and Development Organisation (DRDO) displayed a 30-course space food menu it has crafted for space travellers when India’s first manned mission, Gaganyaan, blasts off in December 2021 for a seven-day sojourn 400 km above sea level, making the country only the fourth in the world after Russia, the US and China to send a manned mission to space, it came as a revelation. For the first time ever, the 3×2.7 m2 diameter Gaganyaan, smaller than the Russian Soyuz, Chinese Shenzhou and NASA’s proposed Orion spacecraft, will carry an all-Indian fare: vegetable rolls, egg rolls, moong dal halwa, idli sambhar, vegetable pulao, upma, tea, fibre-rich juices, among other homegrown concoctions. “Apart from the food, we are also tasked with providing food warmer technology, stainless steel cutlery and a waste-disposal pack,” said Anil Dutt Semwal, Director, DFRL. Prime Minister Narendra Modi announced the space voyage from the ramparts of the Red Fort on August 15th, 2018, saying that “an Indian son or daughter” will carry the national flag on the mission as the country celebrates its 75th year of Independence in 2022.

Space food has come a long way since NASA’s Mercury missions (1959-1963) when astronauts ate unappetising bite-sized cubes and freeze-dried powders from tubes of semi-liquids. They not only experienced difficulties in rehydrating the foods but found it cumbersome to squeeze tubes or collect crumbs. Even something as simple as a few crumbs can become hazardous in microgravity since loose pieces of food can get lodged in shuttle vents or can waft into and choke an astronaut’s nose or mouth. Liquids can float away too. That explains why beverages such as tea, coffee or juices are packaged as powders. The astronauts simply have to add water to the to rehydrate these.

Despite the best of care in packaging and storing of space food, it doesn’t taste the same in a weightless environment since aromas don’t quite make it to the nose. As smell is a big part of the taste, astronauts tend to miss out on a lot of flavours. Weightlessness also results in fluid accumulation in an astronaut’s upper body inducing stuffy noses—consider how bland food would taste with a running cold. “We are keeping our food items mildly spiced, though there will be extra spice sachets for those who want them,” Semwal said, upping the taste quotient in such a stoic environment.

In 1984, when the first Indian cosmonaut Rakesh Sharma went to space as part of a Soviet mission, he too carried ready-to-eat meals prepared by the DFRL then but the menu was only restricted to vegetable pulao, aloo chholey and suji halwa, which he shared with fellow astronauts. And though the jury is still out on whether the Gaganyaan mission will carry one astronaut or more after four Indian Air Force pilots receive physical training in Russia for 11 months starting third week of January, they will certainly be spoilt for choice with an all-Indian menu on board. “We are designing the mission for three people to go to low earth orbit for seven days. However, whether we send two people or one person and whether they spend seven days in the orbit or one will be decided later on in the mission after the two unmanned flights,” pointed out K Sivan, Chairman of the Indian Space Research Organisation (ISRO), in a recent interview to the Hindustan Times.
Among the two unmanned missions will be one with a humanoid robot that will attempt to mimic basic human functions and record parameters such as blood pressure, heart rate, etcetera. “The two unmanned flights will let us ensure whether everything is working well, whether the environment in the modules are controlled, whether it is safe for humans. Like any programme, after two successful test flights, we will undertake the operational flight,” added Sivan. 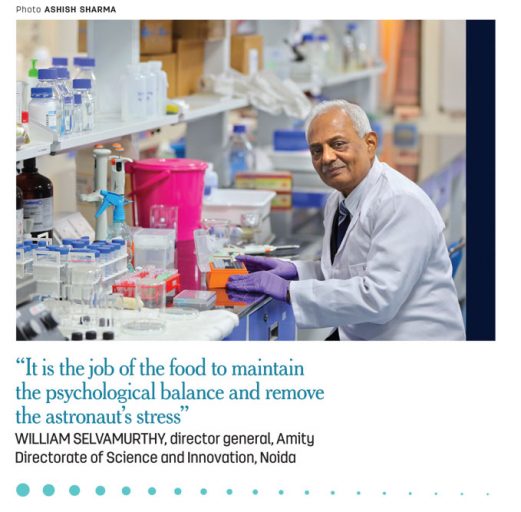 In the final analysis, whosoever makes it to the space mission will get to eat food prepared by advanced processing technologies, claims William Selvamurthy, Director General for Amity Directorate of Science and Innovation and former Chief Controller for R&D and Life Sciences at DRDO, closely associated with India’s space food programme. Through the appropriate food processing technologies, Selvamurthy tells Open, water content in the food will be removed eliminating chances of spoilage. The astronaut will then reconstitute the food with liquid and eat it. “We have also created a self-heating pouch as we are used to warm food.” Besides, the spacecraft itself will have a warm food container.

Again, the food must be easily digestible owing to lack of movement which induces complications like nausea and constipation. It’s worth recalling how Soviet astronaut Gherman Titov experienced space sickness aboard Vostok 2 in 1961 and holds the record for being the first person to throw up in space, necessitating a sharper focus on space nutrition. It is critical for food items to be processed in a way so that they do not generate acids and irritate the gastrointestinal tract. In other words, space food needs to be physiologically appropriate, engineered for consumption in microgravity—well packaged, fast to serve, requiring minimal cleaning up and minimum energy expenditure—they must be easy to open and dispose.

Selvamurthy touches upon another vital part of food intake and maintaining posture in space through yoga. On the ground, our physiology is used to the earth’s gravity. The brain is above the heart and so the heart pumps the blood against gravity and the equilibrium of our posture is maintained by the musculoskeletal system. In space, this organisation is lost as there is no gravity. And because there is no physical activity to burn calories, “the microgravity isometric yogic exercises will take care of muculoskeletal problems, cardiovascular issues and mental stress and resilience”. According to Selvamurthy, the astronaut will be trained in yoga and meditation before take-off and perform at least 30 minutes of yoga each day in space to keep his bearings going. In microgravity, since there is always the fear of blood rushing in to the brain, he claims such exercises will help enormously. Also, a spacecraft chamber can be claustrophobic leading to acute sensory deprivation, isolation, monotony and the fear of the unknown. “It is the job of the food to maintain the psychological balance and remove the astronaut’s stress,” says Selvamurthy.

That’s enough justification for designing a balanced diet in space and Selvamurthy categorically informs that space food has a balance of both tryptophan and tyrosine-rich items. Tryptophan is the precursor for serotonin, a happiness hormone, which induces tranquility and sleep, while tyrosine is the precursor for catecholamines that pump up adrenaline and non-adrenalines and activate the body. “When astronauts go to sleep, they will take tryptophan-rich foods and when they have to stay active, they will partake of tyrosine-rich foods.”

And since there is limited mobility, the fibre content in the diet has to be increased to take care of digestion. Astronauts will also get extra fluids in the form of beverages since zero gravity is a very dry environment. “Carbohydrate-rich beverages will be given, such as kanji and other liquids, which are easily digestible and absorbable,” says Selvamurthy, adding that there will be a feeder for any fluid intake with a mouthpiece so that an astronaut can simply suck it. Alcoholic and carbonated beverages are never part of the menu since they are known to cause wet burps much to the displeasure of astronauts. The bubbles of carbon dioxide in carbonated beverages aren’t buoyant in a weightless environment and remain randomly distributed throughout the fluid, even after swallowing. The bubbles go through the digestive tract rather than being belched out as on earth. This may cause adverse side effects. According to Selvamurthy, advanced food design available in edible packaging are apt choices, which implies an astronaut can chew away the cellulose-based packaging material too instead creating waste.

In space, normally it takes about 20-30 minutes to reconstitute and heat a meal and astronauts have a tray attached either to their laps or the shuttle wall that holds the food container. After the meal, the containers go into the trash compartment in the middeck of the shuttle.

NASA’s intended voyage to Mars and back may take up to two years for which astronauts might have to grow their own food in space. So NASA is working on planting crops such as soybeans, spinach, lettuce, cabbage, peanuts and rice on space farms—artificially lit, temperature-controlled greenhouses that employ a hydroponic system, which uses nutrients instead of soil. That may be way into the future for our astronauts on a week-long excursion into space, but it calls for newer technologies to keep them moored to the mission. One such technology is green nanoscience, in which Kattesh V Katti is a pioneer. As Director of the Institute of Green Nanotechnology in Missouri, US, he has heralded the production of a wide variety of nanoparticles without the use of any toxic chemicals. Katti tells Open: ‘Space physiology demands of augmented nutrition requirements both in quality/quantity of micronutrients and macronutrients are achievable through green nanotechnology. Food and advanced nutritious components consumed by astronauts can be fed as green nanotechnology nanoparticles. By using food as nanoparticles, whatever is consumed directly gets into human cells—this means substantially lower amount of food would be sufficient to maintain a healthy life for astronauts—thus reducing the payload of food to be carried to space while maintaining a more healthy diet than regular food being carried currently. Most importantly, green nanotechnology-based food intake will require considerably lower quantity of consumption to maintain healthy diet. Lower quantity of food consumption by astronauts might reduce the ill effects of weightlessness within the space atmosphere.’

Nanoparticles may also be used to treat spacesuits and keep these fresh throughout the voyage. ‘Nanoparticles-coated clothing cause no bacterial contamination due to sweat or other humid conditions that prevail in different parts of the human body. This would again avoid washing or even bathing and the astronauts would feel fresh and their hygiene would be well-maintained,’ writes Katti.

Whatever be the application of newer technologies in space, India’s attempt to create a holistic menu from the subcontinent is almost on cue with the race for space mirrored by other nations. When astronaut Yang Liwei took to the final frontier in October 2003 aboard the Shenzhou 5, he had specially processed yuxiang pork, kung pao chicken and eight treasures rice, many of which were commercialised down the line. Or consider how the Japan Aerospace Exploration Agency in collaboration with food giants Ajinomoto, Meiji Dairies and Nissin Foods developed traditional Japanese food and beverages, such as matcha, ramen, sushi and soups for space consumption. And on the International Space Station, the Russian crew has an enviable selection of over 300 dishes from their country, including borscht, jellied pike, dried beef, black currant juice, broccoli and cheese. But with proper selection and a balanced diet, India’s space food technologists are ensuring that when our astronauts finally wave the Tricolour from 400-odd km above ground, both time and lunchtime are not illusory. No more.