At 92, Ram Lalla’s lawyer K Parasaran is still in demand. He will oversee the construction of the temple for the god he defended 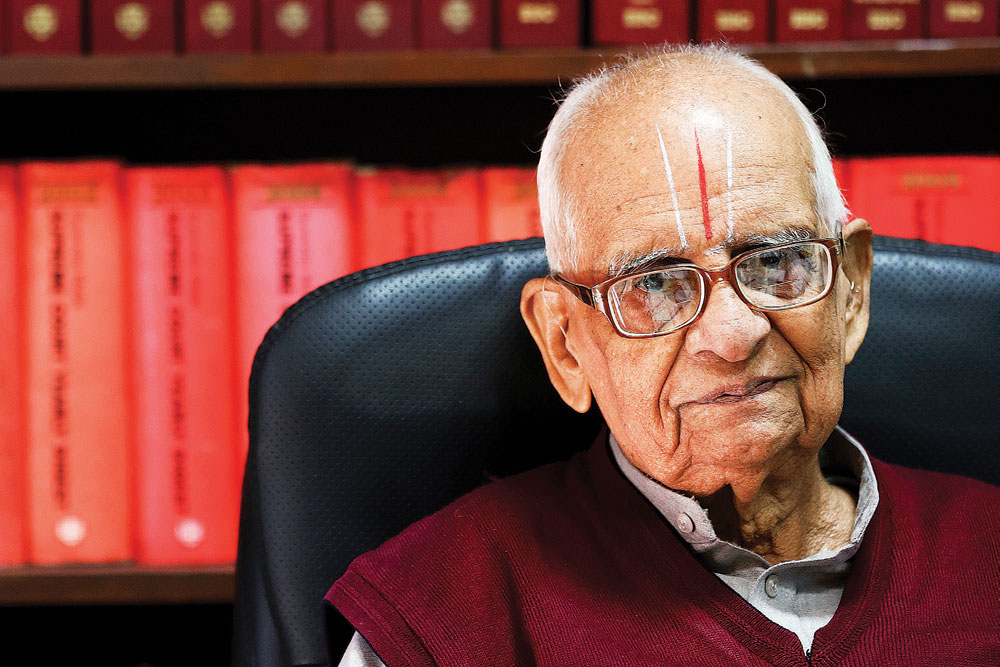 
THE IMAGES IN the living room are apt. There are paintings of Krishna and Radha, Krishna as a child and a small sculpture of Ram holding a bow and arrow in a glass case. As the aroma of south Indian filter coffee wafts in, K Parasaran walks in wearing a white veshti, an indigo-blue sweater, checked muffler, a tilak on his forehead and a stick in hand. “I had to go for a function and it took me so long to get ready. It used to take me just 15 minutes to get dressed for court. These days, I take around 40 minutes to wear my pant, shirt, coat, collar, shoes and still may forget markers, identity card or handkerchief,” says the 92-year-old Supreme Court lawyer.

When he turned 90, he had called it a day, almost. The Ram Janmabhoomi and Sabarimala cases were exceptions. For someone who has been reciting a few sargas (verses) from Valmiki’s Ramayana every day since he was in his early thirties, which has “taken him through life”, Ayodhya has always been close to his heart. When he had agreed to represent Ram Lalla Virajman, the infant deity, in the title suit, Parasaran says it was his last wish to finish arguing the case. On Sabarimala, Parasaran, who appeared for the Nair Service Society opposing entry of women in menstruating age to the Ayyappa shrine, says it is a case that affects religious freedom.

Just when he thought he could withdraw from active work, another task— hosting a trust to oversee the construction of the Ram Temple in Ayodhya— landed at his doorstep, quite literally. The 15-member Ram Janmabhoomi Teerth Kshetra Trust, approved by the Union Cabinet, will operate from R-20, Greater Kailash Part I. It’s R-20, “R for Ram”, as his son Mohan Parasaran, also a Supreme Court lawyer, puts it, while giving directions to the Parasarans’ home address. At the entrance to the office in the basement is a large poster of Venkatakrishnan deity (Parthasarathy, one of the names for Krishna).

The offer came as a surprise to him. “I never expected it. I was wavering. I have detached myself from everything. At this age, I hope I can do justice,” he says. He refuses to explain why he accepted it, saying there are issues of privacy. He has also maintained a stoic silence on the Trust, saying all members will meet and collectively take decisions. They include four religious gurus and those instrumental in the Ram Mandir movement.

Parasaran is again a busy man. “I have not had rest for 10 minutes today,” he says. An Attorney General of India in the Congress regimes from 1983 to 1989, he has been held in high esteem by almost every prime minister, from Indira Gandhi to Narendra Modi, says Mohan. He was awarded the Padma Bhushan in 2003 by the Atal Bihari Vajpayee Government and the Padma Vibhushan in 2011 when Congress’ Manmohan Singh was Prime Minister. Vajpayee had asked him to be a member of the drafting and editorial committee tasked with reviewing the working of the Constitution. Under the Congress-led United Progressive Alliance (UPA)in 2012, he was nominated to the Rajya Sabha. He has appeared for former Tamil Nadu Chief Ministers DMK’s M Karunanidhi and AIADMK’s J Jayalalithaa. As counsel for the Congress-led Government of PV Narasimha Rao in 1993 in the Indira Sawhney case, challenging recommendations of the Mandal Commission on job reservations for Other Backward Classes, Parasaran argued in favour of the criteria of backwardness prescribed by the Commission.

Parasaran insists he is apolitical. “I never involve myself in political cases. I want to be apolitical. Otherwise, can you expect Vajpayee to give me Padma Bhushan and Congress Padma Vibhushan?”

The Ayodhya case was one of the most challenging cases of his career. The presiding judge in the Allahabad High Court had said that the nation was waiting with bated breath for a judgment in the case. “A case like that has never happened in the past and may never happen in the future. The court called it a title suit, so it will not come under any controversy. They maintained its secular character to go into intricacies of the case. This case was something unique.”

In October last year, he argued standing, saying it was the tradition of the bar to stand and argue, when the bench headed by Chief Justice Ranjan Gogoi suggested he could sit and argue the case. Along with his team of six lawyers, he worked overtime, all seven days of the week. “Sir would ensure that we never went hungry while we worked,” recalls Aditi Dani, one of the team members. Parasaran, who argued for the deity as a juristic person, would often make spur-of-the-moment arguments, which were not mentioned in written submissions.

On the concluding day of the arguments in the Ram Janmabhoomi case, despite his written submissions, which he believed were needed to build a structured argument keeping in mind his age, he ended up arguing extempore for two hours, recollects Anirudh Sharma, another lawyer in his team on the Ayodhya case. Parasaran would prepare handwritten notes each day, only to change these every day. “He has a photographic memory, can argue extempore on any topic and is a workaholic. We have to keep in mind that we are working with a master.”

While lawyers today use technology to check facts and history, Parasaran just has to recall what he has read; he draws from Roman and English jurisprudence as well as Sanskrit texts like the Bhagavad Gita, Sharma says. “There’s nothing ordinary about him though he seems simple.”

Parasaran plays down his own role in the Ayodhya verdict, saying “whatever happened was sankalp [resolve] of God. Ram must have decided enough is enough.” He quotes Albert Einstein: “Everything is determined by forces over which we have no control… . Human beings, vegetables or cosmic dust, we all dance to a mysterious tune, intoned in the distance by an invisible piper.”

Asked about the Sabarimala case, Parasaran says it has to be seen as per essential practice of religion. “There is a conflict. That’s why I took it up. There are interesting points but I don’t want to talk about it at this time.” In September, 2018, a five-judge Constitution bench, had allowed women of all ages to enter the temple. It had triggered protests. In November last year, a five-judge bench, in a 3-2 verdict, ruled that a larger bench should reconsider the matter. Recently, a nine-judge bench ruled that questions of law can be referred to a larger bench even in a review petition.


Known to recite scriptures in court, K Parasaran came to be called the ‘Pitamaha’ of the Indian Bar. He says he recites them only when they are relevant to the case

Parasaran, however, says he is not a conventional person, contrary to how some perceive him. Known to recite scriptures in court, he came to be called the “Pitamaha” of the Indian Bar. He says he recites them only when they are relevant to the case. “Some may not like it. Some judges like it. I have culled out several principles of modern law from the Ramayana and Mahabharata, which I cited in the Supreme Court. But I will not say anything from the scriptures unless I am able to link it to the case.”

For Parasaran, his father Kesava Aiyengar, also a lawyer and a Vedic scholar, was his guru. Aiyengar spoke Latin and Greek. “British judges were very fond of him and his English used to be like Chaucer’s. I am not a patch on his knowledge or art of articulation,” he says. After completing his graduation, Parasaran took up a job at the Madras University. But he soon quit and joined law college. A triple medallist in law, he was advised by his father to start independent practice; a plant cannot grow under a tree, his father had told him. Those were difficult days for Parasaran, a time when he says life was in the doldrums. On someone’s advice, he tried to teach part-time in law college, but he did not get the job. He decided to pursue law.

A couple of days after he enrolled, an admission matter was posted. “When I stood up to argue, I was sweating. I was in trepidation. You can imagine my predicament before two judges who were giants. Vishwanath Shastri kept putting questions. I was answering but I was shivering.” A few days later, his father told him that Shastri had met him, during their routine walk on the beach, and appreciated Parasaran’s performance in court. That gave him courage to move ahead. There was no looking back.

Mohan, Solicitor General in the UPA regime from 2013 to 2014, says his father had been intricately connected with Ayodhya since the days of kar seva. Recalling that family matters were left to his mother, he says his father would at times not be able to tell which class any of his five children were in. Parasaran’s other two sons also became lawyers.

Parasaran describes himself as a combination of a sanyasi and family man, “attached to detachment and detached to [sic] attachment”. For him, a lawyer’s foremost duty is to maintain the dignity of the court. “One thing that I am not happy about is when judges refer to the Supreme Court as apex court. An apex is the tip of a triangle. Is there a base to call it apex? The Constitution calls it ‘Supreme Court’. By calling it apex court, you are devaluing the dignity of the court. Just like there is a Supreme Being, there’s a Supreme Court.”

One of the rare occasions when he did openly come out against the Supreme Court was when in 1976, during Emergency imposed by the then Prime Minister Indira Gandhi, it ruled in the Additional District Magistrate Jabalpur vs Shivakant Shukla case that “under emergency provisions, no one could seek the assistance of any court in India to try and save his life, liberty and limb”. During Emergency, he was Advocate General in Tamil Nadu.

Parasaran has maintained a distance from the media. “When I told him he was violating the Right to Information, he said as a lawyer we argue in court and the cases are decided in court. I cannot justify or criticise the courts,” says Mohan.

He has a long list of difficult cases he has fought. He faced Nanabhoy Palkhiwala in the Federation of Hotel and Restaurant Associations and the Bombay Tyres cases. “To appear before Palkhiwala itself is a challenge,” he says. The other group of cases he found challenging is related to judges: the primacy of the chief justice, the collegium and the National Judicial Appointments Commission.