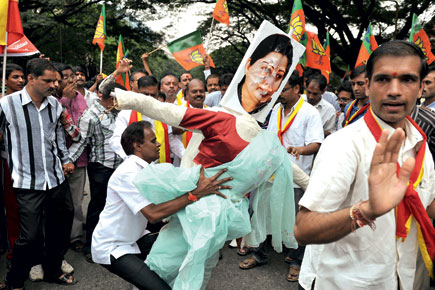 
The protracted failure to arrive at a negotiated settlement in sharing waters of the Cauvery River has once again led to tempers flaring between Karnataka and Tamil Nadu—with farmers from the basin region spilling onto the streets, blocking highways and issuing threats against each other.

The past fortnight saw heightened drama with the issue escalating. Karnataka delayed implementing the Cauvery River Authority’s (CRA) order to release 9,000 cusecs daily from 20 September to 15 October, till the Supreme Court stepped in on 28 September. On 8 October, Karnataka stopped the discharge after protests in southern Karnataka and sought the Prime Minister’s intervention. When the PM refused to convene a meeting saying there was no mechanism to review the CRA’s decision, and snubbed Karnataka CM Jagadish Shettar by refusing to give him an appointment, the issue turned political, much to the dismay of the Congress party which is eyeing a comeback as Assembly polls are due in the next few months.

The point of Tamil Nadu’s contempt petition before the apex court now is to have Karnataka termed a ‘contemnor’ for not releasing its legitimate share. Karnataka has been emboldened by advice from its legal experts who are of the view that in times of extreme distress, if it is beyond the government’s control to release water, then it cannot be construed as contempt. “There is no water in the reservoirs. We have already released the backlog and some excess. How can we release any more water?” asked Deputy CM KS Eshwarappa.

The issue, which has political overtones, underlines the need to come to a proper conclusion on distress sharing of waters in times of low rainfall and changing cropping patterns in Tamil Nadu.

The crisis has given the beleaguered BJP government in Karnataka—ridden with factionalism—and the Janata Dal Secular (JD-S) a second life.

In contrast, the Congress’ Siddaramiah was forced to vacate a protest venue in Mandya because of the Prime Minister’s stand on the issue. And worse, even the Union ministers from Karnataka were blaming the Centre for trying to placate J Jayalalithaa. And though the Congress’ relations with its current partner from Tamil Nadu, the DMK, seem to be on shaky ground, it too has asked the PM to dismiss the Karnataka government.

“Every time Jayalalithaa becomes CM, she can be trusted to rake up the Cauvery issue. This is the third time she has become CM and we can only expect it to get worse,” says a Karnataka government official.

As per the final verdict of the Tribunal, which came after 17 years of deliberation, of the total 726 TMC (thousand million cubic feet) of available water, Karnataka has been awarded 270 TMC, Tamil Nadu 419, Puducherry 7 and Kerala 30.

The river has been a bone of contention for the last 130 years now. The first plan for the utilisation of Cauvery water was drawn up in 1881 by the then Mysore rulers. The Mysore royalty and Madras Presidency signed an agreement on river water sharing soon after.

But matters came to a head in 1910 when the Mysore government sought to build the Krishna Raja Sagara Dam. It was the first time the issue went for arbitration.

After Independence, the Cauvery Fact Finding Committee came up with its final report in 1973. Meanwhile, both states increased their command area without taking into consideration their water requirements. The dispute took a new turn when MG Ramachandran came to power in Tamil Nadu. He rejected the draft agreement and insisted on status quo.

When the tribunal ordered an interim award a year later, Karnataka deemed it extremely inimical to its interests and issued an ordinance seeking to annul the tribunal’s award. The Supreme Court stepped in to strike down this ordinance. This action led to riots in southern Karnataka, as a result of which thousands of Tamil families were displaced.

Though Karnataka maintained that the award was not ‘scientific’, it nevertheless complied with the orders till a monsoon failure in 1995-96.

In 2002, poor rains again led to a similar pattern and Karnataka refused to release water. The Tribunal’s oversight of this crucial point, on how to manage the release of water during years of deficient rain, has returned to haunt the states.