The latest death of a translocated tiger reiterates how Sariska continues to stand for everything that could have gone wrong with conservation in India. 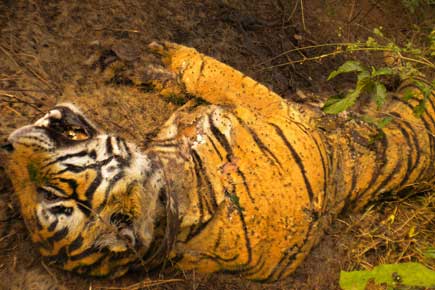 The latest death of a translocated tiger reiterates how Sariska continues to stand for everything that could have gone wrong with conservation in India.


The latest death of a translocated tiger reiterates how Sariska continues to stand for everything that could have gone wrong with conservation in India.

What do you do when you cannot save the tigers in your custody? In Rajasthan, you blame the tiger. So when the rotten carcass of the first of five tigers translocated to repopulate Sariska was found this Sunday, the officials were quick to explain the death as a result of infighting.

Five tigers—two males and three females—were shifted to Sariska between June 2008 and July 2010. Even before a post mortem was conducted on male ST1’s carcass, forest bosses told the media that he was killed by the other male ST4 who has been missing for a couple of weeks now. They knew that the decomposed body would not have revealed much.

However, the skin on the dead tiger was intact and it showed no scar indicative of any fight. There was no sign of any struggle on ground. Sources in the National Tiger Conservation Authority (NTCA) and the Wildlife Institute of India (WII) pointed out that the death was caused by poisoning. But they would not go on record refuting the claims of their Rajasthan counterparts.

“There was no indication of any fight at all. Though the decomposed visceral organs may not give out any trace of poison, what else could have killed a healthy tiger in its prime? Remember the carcass was found close to a village at the edge of the reserve,” says an official on condition of anonymity. Indeed, it was not difficult to poison a kill since both male tigers of Sariska were frequently preying on cattle.

Two days after the carcass was found, Environment and Forests Minister Jairam Ramesh rushed to the field after NTCA chief Dr Rajesh Gopal briefed the minister about the circumstantial evidences of poisoning. With their infighting theory tottering, the state forest bosses are now trying to find new excuses, blaming the death on tuberculosis or a snake bite.

While the authorities may yet not succeed in hushing up the poisoning, what irks a number of conservationists is the total lack of professionalism and transparency. They point out that the joint monitoring teams of WII and state forest department are supposed to have daily records of land use and prey habits of the five translocated tigers and a death cannot go unexplained.

“If there was no sign of a fight, the viscera should have been sent to an advanced forensic lab to establish if the tiger was poisoned. It was clearly not poaching for skin. Either some locals were avenging regular loss of cattle or some vested interest instigated them to take out tigers. In either case, it’s a failure of management and monitoring science and needs to be investigated by an independent agency,” says PK Sen, former director, Project Tiger.

To many, it was a disaster waiting to happen. The tiger has long become a pawn in an open gamble of power and money in the state. What is worse, some of India’s top sarkari wildlife scientists have reduced themselves to rubber stamps to give this sacrificial game the sanctity of scientific conservation.

As early as 2005, soon after Sariska had lost all its tigers, an empowered committee set up by the Rajasthan government identified the factors responsible for the local extinction and mandated that any attempt to reintroduce tigers without securing the reserve would put future populations at risk.

The state administration slept over the recommendations for almost three years and yet managed to secure the Union ministry’s nod, cleared by an office no less powerful than the prime minister’s, to launch a tiger reintroduction programme.

So with villages still dotting the core area, pilgrims bound for Pandupol temple moving unhindered inside the forest and heavy traffic speeding along state highways SH13 and SH29A across the reserve, Sariska was declared ready to host tigers again. In a tearing hurry, a WII team flew in the first tiger from Ranthambhore in June 2008. After all, the state elections were due in a few months, tourism needed an urgent revival, and a top official in the union ministry fancied a historical photo-op as her farewell gift.

Two tigresses followed shortly but months into regular mating, there were no cubs to celebrate. It soon turned out that the tigers—sent without any checks for breeding compatibility—were siblings, fathered by one male from two tigresses. Even if their mating had led to an offspring, it would have posed the risk of inheriting the recessive gene, crippling the founder population.

So in 2009, the reintroduction drive was put on hold for more than a year and a thorough DNA study ordered. But when the fourth tiger was to be picked up from Ranthambhore, based on the DNA report, the officials inexplicably decided to overlook other crucial criteria. A Union ministry guideline clearly stated that only young transient tigers could be selected for translocation. But this time, they shifted a mature male tiger, which had already marked its territory in Ranthambhore and impregnated a tigress.

This compromised the chances of the male settling down in its new habitat – all resident animals when uprooted try to home back to their erstwhile territory. It also spelt doom for the tiger’s cubs in Ranthambhore. In his absence, any other male tiger seeking to mate with the tigress would kill first kill the cubs to establish its own bloodline.

Months after the release, the male ST4 still remained restless and has been missing for the last three weeks. He was “lost” on a few occasions earlier as his radio collar stopped sending satellite data within days of his arrival in Sariska. Then the back-up VHF signals that are supposed to be available to handheld antennas within a 3 km range weakened to just a 1 km radius. Meanwhile, the cubs he fathered in Ranthambhore have been spotted only once since the reserve opened after the monsoon.

Last week, busy looking for male ST4, the WII monitoring team forgot about ST1. So nobody was alerted even though the tiger sent death signals (stationary) for 3 days. The village Kala Khet where the carcass was found lies close to the medieval fort of Kankwari in Sariska’s core where major renovation work is going on. Kankwari and Kala Khet both have permanent forest posts. Even without a radio collar, the dead tiger should have been traced much earlier had the forest guards followed the rigours of regular foot patrolling.

In fact, the reintroduction drive in Sariska started under Rajesh Gupta, an able officer who was specially brought in from Bharatpur for the purpose. Within months, the staff revolted against his tough work ethics and he was shunted out. From that point, the management continued to slide as top posts either remained unoccupied or were filled up with officers least interested in field work. The present director K K Garg runs Sariska from his Alwar office 30 km away and many old-timers who were suspended after the 2004 debacle are back on duty.

But such anomalies are not unusual in a state that refuses to budge even after the union ministry repeatedly urges its chief minister to stop mining around Sariska. As the tug-of-war continues, the number of mines inexplicably doubles up from 32 to 68.

So much under the media spotlight, the continuing mess at Sariska has been the most arrogant statement of the establishment that it just could not care less. Six years back when the reserve became a death trap, the authorities suspended a few staff but did precious little to secure the ground. The response appears to be the same this time as they continue to be in denial mode. It may not be too late yet for all to learn some lessons from history. Otherwise, it has a tendency to repeat itself.