The failure of Nano seems to have bogged the car-maker down, but perhaps JLR’s engineers can help revive its sales in India 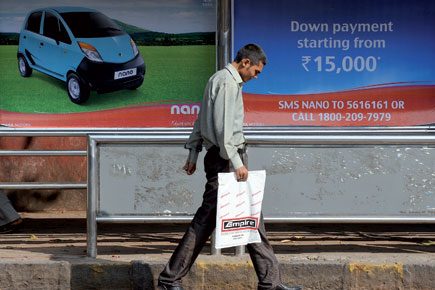 The failure of Nano seems to have bogged the car-maker down, but perhaps JLR’s engineers can help revive its sales in India


The shock figure in business circles these days is 70 per cent: this is the tumble that sales of Tata Motors’ passenger vehicles have taken this February—it sold just 10,636 units—over the same month last year. Yes, the entire market has slumped, but Tata Motors’ performance is particularly poor, with its marketshare slipping to 8.8 per cent; it was in the teens some years ago and still in double digits till late last year. Its compact cars and sedans have taken a battering over the past six months.

The company’s diesel models are often put to commercial use, and so India’s economic slowdown has hit it harder than others. Even for personal use, its cars are aimed at the price-sensitive buyer, whose confidence has been hurt by a “slowing economy and inflationary pressure” in the words of Kapil Arora, partner, automotive practice, Ernst & Young. High interest rates on car loans have also acted to dampen customer enthusiasm. Moreover, “The Government’s recent push to incrementally align fuel prices with market rates has made the overall cost-of-ownership too high for the price-sensitive buyer,” says Sudarshan Shreenivas of India Ratings & Research. Diesel vehicles, Tata’s mainstay, are no longer seen as big fuel-expense savers.

The company has resorted to an array of special schemes to boost sales. For its Manza sedan, it has a buyback offer aimed at assuring this model a minimum resale value after some years of service. It may not be enough. In the sedan segment, say auto analysts, it has failed to keep up with style trends. While the aerodynamic ‘fluidic’ and ‘arrowshot’ designs of its Korean and Japanese rivals have stolen ahead, Tata’s sedans look too boxy and dated to appeal to urban sophisticates.

For Nano, sales of which were dismal in February, the company now offers same-day delivery at the swipe of a credit card. This model, hailed as the world’s cheapest car, is also the one observers pin most of the firm’s troubles on. As its former chairman’s ‘dream project’, many suspect, it has drawn too much management attention at the cost of other models. Also, Nano has had poor word-of-mouth reviews; its ownership seems to cause a peculiar kind of customer unease. Some say it is underpowered and thus too meek in the rough-and-tumble of Indian traffic. Others say it does not serve the status aspirations of its main target buyer: the upwardly-mobile two-wheeler user.

Of course, an intense re-dedication to research and development could solve such problems. Maybe Jaguar Land Rover’s engineers could lend the Indian operations a hand.