India’s seafood exports stand at only $3.5 billion but could shoot up if aquacultural efforts pay off 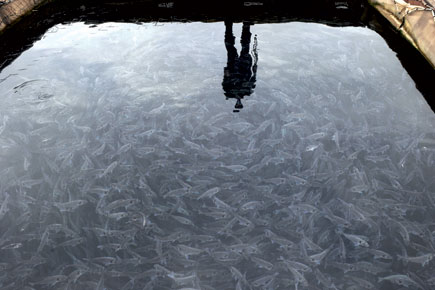 India’s seafood exports stand at only $3.5 billion but could shoot up if aquacultural efforts pay off


Given India’s current account vulnerability, the $3.5 billion of seafood exports last year looks like a valuable contribution to the country’s forex kitty. But it’s only a drop in the ocean if one considers the potential. “The economic value of our vast coastline—about 8,000 km—and inland water resources is yet to be fully realised,” admits Leena Nair, chairperson of India’s Marine Products Export Development Authority. The future, she says, lies in aquaculture—a farming technique that has already boosted the output of Vannamei shrimp, a variety of prawn that generates half the country’s seafood export earnings. This exotic species, found mostly in warm Pacific waters, “has really caught on in India and would help us export about $5 billion of seafood by 2014-15”, expects Nair.

Aquaculture relies on captive breeding of seafood and does not require anyone to venture far out into the sea with motorised trawler boats, which has been getting costly on account of rising diesel prices, according to DB Ravi Reddy, president of the Seafood Exporters Association of India. But the technique demands a careful approach, especially for Vannamei shrimp, which are susceptible to disease if optimum breeding conditions are not maintained. India has enough natural brackish water for it, but is mostly unused. It does not help that India lags other countries in the development of disease-resistant hybrids. “It is advisable that India bridges the yawning coordination gap between scientific research, mostly done by central agencies, and the country’s coastline states where these developmental fishery programmes are implemented,” says Dr Vijay Gupta, who is a member of a scientific advisory committee at the Rajiv Gandhi Centre for Aquaculture based in interior Tamil Nadu.

The industry’s other big concern is the rising cost of the mix of animal and vegetable protein that captive fish and shrimp are fed. “Since this cost is constantly going up,” says Gupta, “an improvement in the feed conversion ratio—a measure of how much food turns into how much body mass of aqua species—is required to make the feed cost economical for farmers.” The typical ratio in India is not bad by global standards, but could be higher still.

According to Reddy, India’s aquacultural thrust does have the capacity to multiply seafood exports. But market conditions in the West, where the products’ price realisation per tonne is far higher, are so tough that just a 10-per cent annual growth would be enough of a challenge. Demand is in the doldrums and there exist trade barriers too. But with some “negotiation and persuasion ”, he believes, India could “sail through these troubled waters”.