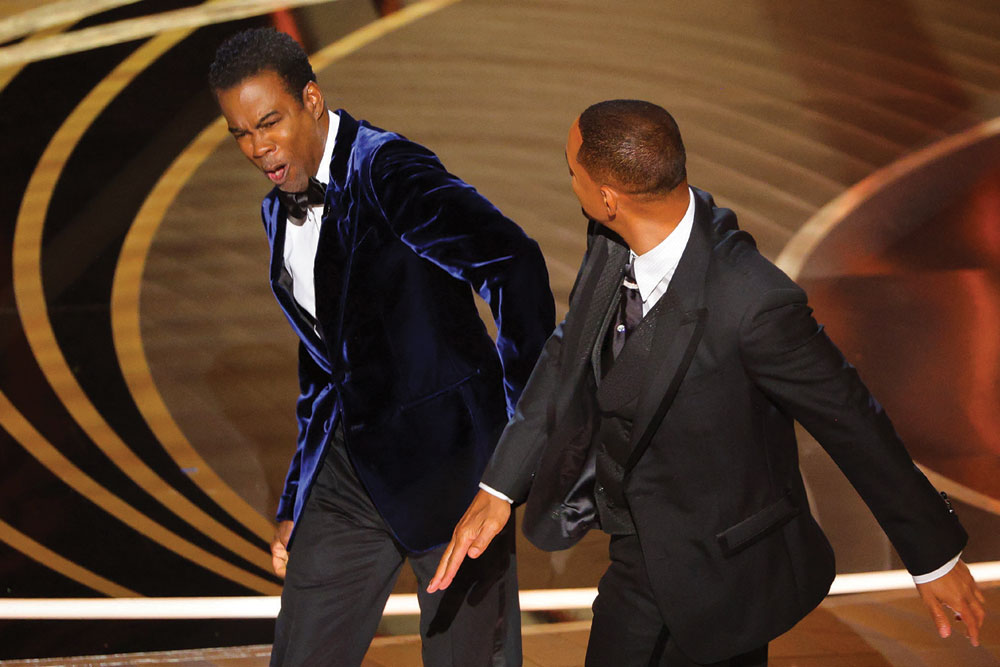 Will Smith slaps Chris Rock at the 2022 Oscars


THERE IS A scene early in the film King Richard where the real-life character of Richard Williams, father of the tennis superstars Venus and Serena Williams and played in the film by Will Smith, follows a local hoodlum who’s been harassing one of his daughters, intent on killing him. It’s an out-of-character turn. Until that moment, Williams has been someone who doesn’t get into fights, no matter the provocation, humiliation, or even assault heaped on him. Williams has a plan (to turn his two daughters into tennis prodigies), and he intends on sticking to it.

But at that moment, Williams has reached something of a cul-de-sac. He is unable to convince those who can help that his two daughters are tennis stars in the making. And then he is assaulted again. Williams walks towards his assailant with a gun when a car passes by, and its occupants shoot the thug dead. A startled Williams walks back to his car and his plan.

Just like Williams, whose role he plays with a lot of tenderness, Smith probably had a plan for his career too. And after three decades of sticking to its course, as he waited for the prize to finally materialise at the 94th Academy Awards, with just about an hour to go, he lost it. No car appeared here as it had in the film to startle Smith out of what he was about to do. The slap to Chris Rock after he had taken a dig at Smith’s wife Jada Pinkett over her hair loss condition, became an event by itself, one of those baffling moments captured live, that will live on in pop culture discourse like the time Mike Tyson bit Evander Holyfield’s ear or when Justin Timberlake exposed Janet Jackson’s breast at a Super Bowl halftime show.

Smith is someone who has carefully crafted a public image around niceness for some time. As he became one of Hollywood’s most bankable stars through the 1990s and 2000s, he made it a point to come across as someone fundamentally decent and wholesome, becoming in the process, along with Denzel Washington, Black Hollywood’s dignified elder statesmen today, and reminiscent in a way of the appeal of Sidney Poitier. (Interestingly, in the 1993 film Six Degrees of Separation, Smith plays Paul, a hustler who charms his way into the lives of some New York socialites by pretending to be Poitier’s son.)

But there has always been a guarded approach throughout Smith’s career. He might have come to be loved by millions through his image, but he revealed very little of himself.

Either because of the nature of contemporary celebrityhood or a string of flops—most likely, both—Smith has tried to unmake this earlier approach of guardedness. He has, along with his family, tried to refashion themselves into a family people want to read about or watch or listen to. So, while Smith has loosened himself on social media, published an uncommonly vulnerable autobiography last year, where he revealed, among other things, about the abuse his mother suffered at the hands of his father, done a YouTube series on his weight loss journey, Jada and daughter Willow host a popular Facebook show known for unexpectedly vulnerable conversations like the time when Smith and Jada did an episode about her affair with the musician August Alsina.

It is a noticeable pivot in personal branding that Smith and his family have decided to take, one which, while retaining (at least, in Smith’s case) its image of pleasantness, let go of the earlier reticence to make intimacy its stock in trade. This hasn’t always been easy. And it has also made Smith the butt of many jokes, especially around the issue of Jada’s affair. Perhaps that was one of the undercurrents to the slap, which Smith in his Oscar speech seemed to allude to when he said how “we are supposed to smile and take it.”

The slap changes our ideas about Smith. Perhaps for a brief moment, a crack appeared in his carefully crafted persona, and something got loose. The slap also took the zing out of his own Best Actor win. There will now forever be an asterisk on his Oscar, a victory that felt as much as defeat.