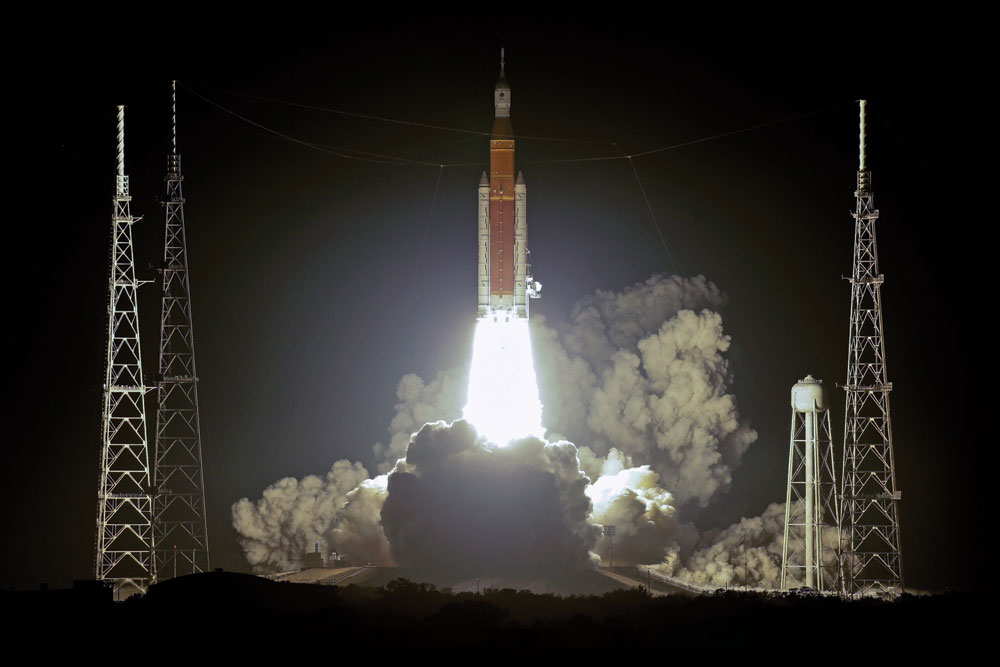 The first flight of NASA’s Artemis programme lifts off from the Kennedy Space Center in Florida, November 16, 2022 (Photo: AP)


2001: A SPACE ODYSSEY, ONE OF THE most popular science fiction books ever writ­ten, begins with a mysterious small structure on the moon that couldn’t be natural because of its clear geo­metrical ratios. And then a similar but much bigger one is ob­served in one of the moons of Jupiter. This, in the imagination of the writer Arthur C Clarke, was an advanced alien civilisation making humans ready for contact. As it turns out, the search for other worlds by humans is also beginning with the moon. It already did last week when a NASA spacecraft, Orion, took off on the first flight of what is called the Artemis missions to the moon. Ordinarily, this wouldn’t be something to be excited over. Moon is not very far when it comes to space and we have sent probes beyond the solar system. India itself had Chandray­aan going to the moon almost 15 years ago. Artemis is different. It is like Christopher Columbus setting off without knowing what he was about to unleash. Except that we have a very clear vision of the future with Artemis.

The present spacecraft has no passengers but by 2025, the third Artemis spacecraft plans to land humans on the moon. That itself will be a milestone because the last person to step foot there was half-a-century ago. The US then realised that the resources being taken over in its competition with the Soviet Union, the incentive for the moon landings, was too high. The money just flowed in one direction without coming back.

Technology is now making it possible to see space as not just exploration but commerce and the promise of vast profits on the distant horizon. For an instance of how the world has changed, a decade ago, a non-governmental organisation called Mars One had the plan to get human beings on a one-way journey to Mars and colonise it. They would finance it by making a longlist of po­tential volunteer space travellers and then have a reality show to decide on the finalists. The proceeds from that show would fund the project. It didn’t work out and Mars One went bankrupt, but it still is an indication of how sources of funds never available before were now there to be tapped. There are also private ven­tures, like Elon Musk’s SpaceX, which has an endpoint in Mars colonisation, and on the way, they are becoming a profitable private company by providing other services related to space.

The one with the deepest pocket still remains the US gov­ernment. Their first manned moon missions were just flaunt­ing superpower status. Now, they are also looking at space as resource material, starting with the moon. As NASA says on its website about the Artemis launch: “With Artemis missions, NASA will land the first woman and first person of color on the Moon, using innovative technologies to explore more of the lunar surface than ever before. We will collaborate with our commercial and international partners to establish the first long-term human-robotic presence on and around the Moon. Then, we will use what we learn on and at the Moon to take the next giant leap: sending the first astronauts to Mars.”

“Demonstrate new technologies, capabili­ties, and business approaches needed for fu­ture exploration including Mars…Establish American leadership and a strategic pres­ence on the Moon while expanding our US global economic impact…Broaden our com­mercial and international partnerships.”

What makes Artemis truly historical is that they plan to stay on the moon. Just like the International Space Station is a perma­nent outpost of humanity, the moon will be a base and it’s not too far away. Speaking to BBC, Howard Hu, the programme man­ager for Orion, prophesied that this could be by 2030. The BBC website said: “Once the safety of Artemis’ components and systems has been tested and proven, Mr Hu said the plan was to have humans living on the Moon ‘in this decade’.” But there was even more. “A large part of the reason for going back to the Moon is to discover whether there is water at the satellite’s south pole, he added, because that could be converted to provide fuel for craft going deeper into space—to Mars, for example. ‘We’re going to be sending people down to the surface and they’re going to be living on that surface and doing science,’ Mr Hu said.” The presence of water on the moon is crucial to this ambition and India itself made an important contribu­tion when Chandrayaan confirmed that it indeed did exist. Water makes a permanent settlement viable because it is the single most important necessity for the human body. It can also become a fuel source and be used to make the environment habitable.


The US leads Artemis, but it is not alone; more than 20 countries are partnering with it, signing what is known as the Artemis Ac­cords. India is still not one of them, but it is considering. Last year, after Prime Minister Narendra Modi met US President Joe Biden, in a factsheet released by the White House on the areas in which progress was made, was also this: “The United States welcomes India’s consideration of potential cooperation in Artemis and the Artemis Accords, a set of principles to support the safe and trans­parent exploration of space to the Moon and beyond.”

Just as during the Cold War days, Artemis also has competi­tion now. On the other side of the US-led bloc are Russia and Chi­na. Last March, they also announced a plan to set up a permanent base in the moon called International Lunar Research Station. Reporting on it, Space.com said: “Indeed, the two projects appear to be targeting the same general patches of lunar real estate— highland regions that offer easy access to lots of sunlight as well as the water ice that’s thought to be abundant on the shadowed floors of polar craters.” They are wooing India, too. Given India’s fractious relationship with China, it looks unlikely. On the other hand, India has a long history of cooperation over space with Russia. A paper by the thinktank, Takshashila, argued that India is better served by hopping on the Artemis bandwagon. Still, it shouldn’t close all its options either because where it stands in space also spills over into relationships on earth. It said: “India’s strategy hinges on having a seat at the table. It can join either lunar programmes or both while also simultaneously pushing for an updated UN-based treaty. It must, however, prioritise… While the Artemis programme is likely to bring India the great­est benefits in terms of lunar exploration, it can also simultane­ously enhance space cooperation with Russia either through the ILRS or bilaterally.”

The colonisation of the moon will be the precursor to the colonisation of Mars. But there could be slippages in between. The Artemis launch took place after it was postponed twice, and any disaster with a crewed spacecraft could take the clock back by a long time. Meanwhile, the moon is beginning to attract private ventures, too. A Japanese company, ispace, is planning to be the first commercial venture to put a lander on the moon next week and the spacecraft carrying it is that of SpaceX, also a private company. An article in Nature said: “The success of the missions by ispace and other firms will be a “huge, important step to developing the lunar ecosystem”, says Ryo Ujiie, chief technology officer at ispace. This system is ultimately geared towards harvesting water on the Moon. Some companies hope that lunar water can be used to produce rocket fuel that could eventually make Solar System exploration cheaper.”

As space colonisation becomes a reality, questions of laws to be followed around it are reopening. No one can claim owner­ship in space because the Outer Space Treaty of 1967 commits that sovereignty on earth cannot extend outside it. German broadcaster Deutsche Welle (DW), in an article titled ‘Who Owns The Moon?’, said: “…but what happens if people extract materials from the moon? Can they own and sell them? Accord­ing to Soucek [Alexander Soucek, head of public international law at the European Space Agency], this is a major point of ten­sion. ‘Country X or Y might say they have no interest in claiming the moon as national territory, but they are interested in owning materials extracted from the moon or Mars and selling them back on Earth,” Soucek said.” It is why India waits for clarity and chooses to not jump with the US or Russia-China in a hurry. Going with either one is not merely an exploration partnership but signing on for whatever their interpretation of laws of space would be as it is colonised. And if history tells us anything, it is that colonisation is rarely peaceful, even if inevitable.