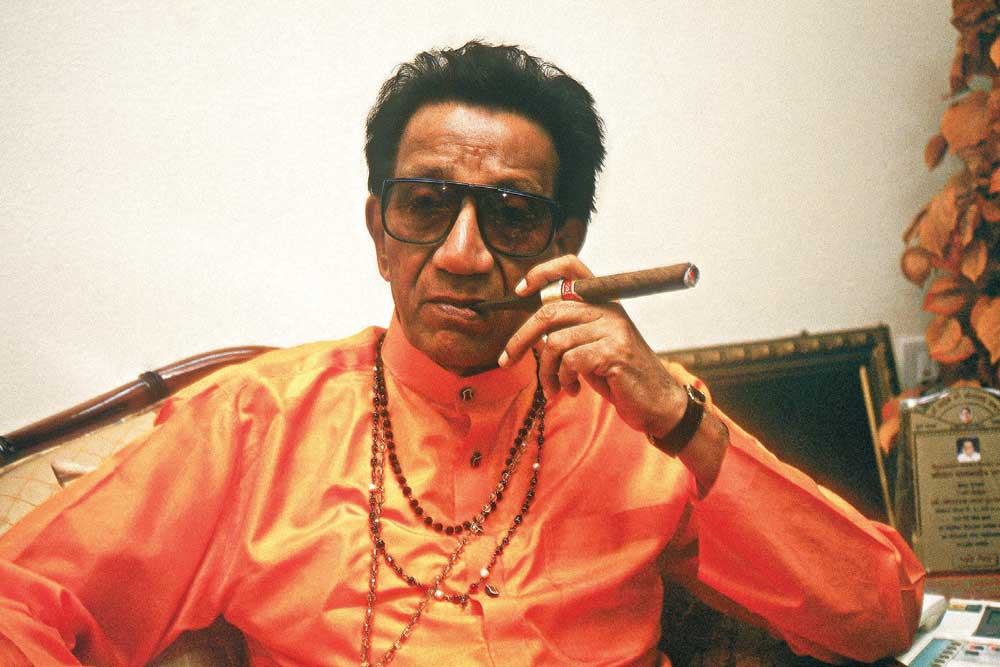 
It was September 2000. A group of Bharatiya Janata Party (BJP) karyakartas trooped into Matoshree, the residence of Shiv Sena supremo Bal Keshav Thackeray. The previous day, Bangaru Laxman, the newly anointed BJP president, at a meeting in Nagpur, had observed that BJP needed to make “sustained efforts to reach out to Indian Muslims”. As the group waited, Bal Thackeray walked in. Thackeray, the cartoon­ist, bowed in faux humility to the group and greeted them with “Salaam Alaykum”. He then thundered that those whom BJP sought to woo would not be wooed and added, “Be assured that those who are with you will leave you.”

The cold logic, the clarity of stance and the dramatic presenta­tion of disdain left the gaggle of BJP workers dumbstruck. The group could barely muster a sheepish grin. The idea in any case didn’t travel much farther as the party found the enthusiasm for the project deserting it.

The episode etches the quintessential Bal Thackeray and where he placed Shiv Sena in the political firmament. Two de­cades later, the inheritor of the mantle, Uddhav Thackeray, is facing accusations of deserting the core principles of Shiv Sena.

Critics have drawn from popular literature and cinema to troll Shiv Sena and the chief minister of Maharashtra. Lines from GD Madgulkar’s classic poem ‘Udhava ajab tuze sarkar’, a plaintive plea to the Lord, was repurposed for Twitter trolling as ‘Udhava Visar Tuze Sarkar’. Very simply: “Uddhav, forget your government”.

The cause of the furore is located in a tectonic event—the re­volt led by Eknath Shinde. It is not that there haven’t been rebels before—Chhagan Bhujbal left in 1991 and so did Narayan Rane later. But this time, Shinde has on his side 39 of the 55 Shiv Sena MLAs. There are more MLAs in the rebellion than the parent outfit. The number of MLAs who have revolted is larger than the sum total of all who had left with Bhujbal and Rane. The worst cut being that every minister—barring Aaditya Thackeray—is ensconced in Guwahati with Shinde.

Normally in Indian politics it is the parent outfit that issues conciliatory statements—of the “come home, all will be for­given” kind to placate rebels. In stark contrast, it is the rebels who are urging Uddhav Thackeray to “come back to the fold” by exiting the Maharashtra (Maha) Vikas Aghadi (MVA) alli­ance. Further, they want Shiv Sena to form the government in Maharashtra in alliance with BJP as they find the pact with Con­gress and the Nationalist Congress Party (NCP) “unholy”. The underlying theme of the rebellion is that the metaphorical tiger must not change its stripes.

Perceptions and expectations about ideology are mostly an­chored in context. Whether Shiv Sena did or should change its stripes is an open contextual question. What is indisputable is the consistent use of a means to an end strategy or a strategic ambigu­ity on the part of Thackeray. When Bal Thackeray set up Shiv Sena in June 1966, it was designed to represent the interests of the son of the soil—the Marathi Manoos. Its aim was to enable affiliation through cultural and linguistic identity. The timing of its forma­tion, in the wake of Maharashtra and Gujarat being carved out of the Bombay Presidency, created room for anti-migrant rhetoric. The targeting of south Indians and their establishments, of busi­ness communities and minorities, was an essential part of the script. It got the party attention and affiliation.

The rise of leftist unions and strife in Mumbai’s industrial belts troubled both business and the government. Shiv Sena set up its own union, the Kamgar Sena, deploying the son of the soil card for enrolment, and presented the party as a bulwark against the rise of the Left. In this, it was supported by Congress, then led by VP Naik. Indeed, Shiv Sena in its initial days was dubbed by socialists and leftists as Vasant Sena. The expansion enabled funding its activities and ex­panded its footprint considerably.

Thackeray’s persona was an es­sential ingredient in the crafting of the plank of affiliation, of love among followers and the spectre of fear among foes. The journey of Shiv Sena from regionalism to ultra-nationalism was shaped by events, threats and opportunities. In 1975, Bal Thackeray supported the imposition of Emergency by Indira Gandhi despite protests by founder members who then quit the party. Indeed, Thackeray often averred that India needs a dictator or “thokshahi” as he described it.

The shift to Hindutva happened in the 1980s and 1990s. Thackeray propelled the Sena’s evolution. It was influenced in part by the writ­ings of his father, known to readers as Prabodhankar Thackeray, and by tumultuous events. Shiv Sena’s role in the Mumbai riots of 1992 and 1993 earned Thackeray the sobriquet of “Hindu Hruday Samrat”.

The Shiv Sena-BJP alliance was a natural extension given the commonality, the cause of Hindutva. That said, the saffron sym­phony was rocked regularly by discordant notes and personality conflicts. Thackeray was impatient with BJP’s approach on the Ram Temple issue. Shiv Sena stridently opposed privatisation of public sector units, almost derailing the programme. Regional chauvinism persisted. The Sena targeted north Indians even as BJP was trying to woo voters in Hindi-speaking states. Thackeray was not shy of doing his own thing—for instance, he chose to back Congress’ Pranab Mukherjee for president.

What is striking is that, despite occupying the popular mind space for decades, Shiv Sena could not expand its footprint across rural geographies. Its influence has largely been in urban areas like Mumbai where it has retained the reins of the BMC since 1984. Un­like other regional parties like DMK, TDP or the Biju Janata Dal with roots in linguistic and cultural identities, it struggled to aggregate votes or harness power. Despite being a visible and vocal entity since the 1960s, the Sena first came to power only in 1995 and even thereafter it needed partners.

The gap between potential and reality is only partly explained by Bal Thackeray’s advancing age and health issues before his death in 2012. Sure, it is a hard act to replace. Yes, there is the out­reach by Aaditya Thackeray, but it’s too recent. In the decade after Balasaheb, the party has struggled to recast its appeal to a younger, more modern Maharashtra. The crux of the issue is inadequacy of intellectual firepower to conceptualise an expansion and the institutional structure to implement a plan.

The rebellion led by Eknath Shinde is in many ways the consequence of unattended issues, ranging from institution­al dysfunction to ideological distress. To truly appreciate the magnitude of the crisis facing Shiv Sena, one must parse the Shinde revolt into three segments: the person, the institution, and the context.

Who is Eknath Shinde? He is the protégé of Anand Dighe who, in the 1980s and 1990s, was called the “Bal Thackeray of Thane”. Like the Sena supremo, Dighe had a larger-than-life image. He was the arbiter of the grievances of the Marathi Manoos. After him, Shinde, who rose through the ranks, carved out a similar image for himself, and this is vouched for by ordinary folk who seek his help like the denizens of Chiplun for whom he sent people and equipment from Thane to clean up the town after floods.

At the institutional level, the grievance of the rebel MLAs is the unavailability of the leadership for addressing their issues. Covid made things difficult and Uddhav Thackeray was unwell for some time. But the general perception is that the party has been taking elected representatives for granted. Shinde stepped into this vacuum of leadership. Word has it that the MLAs’ loyalty to Shinde is an outcome of his attention to them.

To top it all is the challenge of political context. Yes, there is the nudge and incentive, the narrative of being cornered by agencies. But there is no disputing that the MLAs faced an existential ques­tion about their political future given the electoral reception to Narendra Modi’s brand of Hindu nationalism. It can be argued that BJP amplified the surround sound—the reading of Hanuman Chalisa or Raj Thackeray’s loudspeaker ban agitation—but the fact is that the public response rattled Sena MLAs.

Albert Camus said: “Rebellion cannot exist without the feeling that somewhere, in some way, you are justified.” The rebels have clearly sensed peril and found their justification.