Modi has shifted the terms of debate on employment 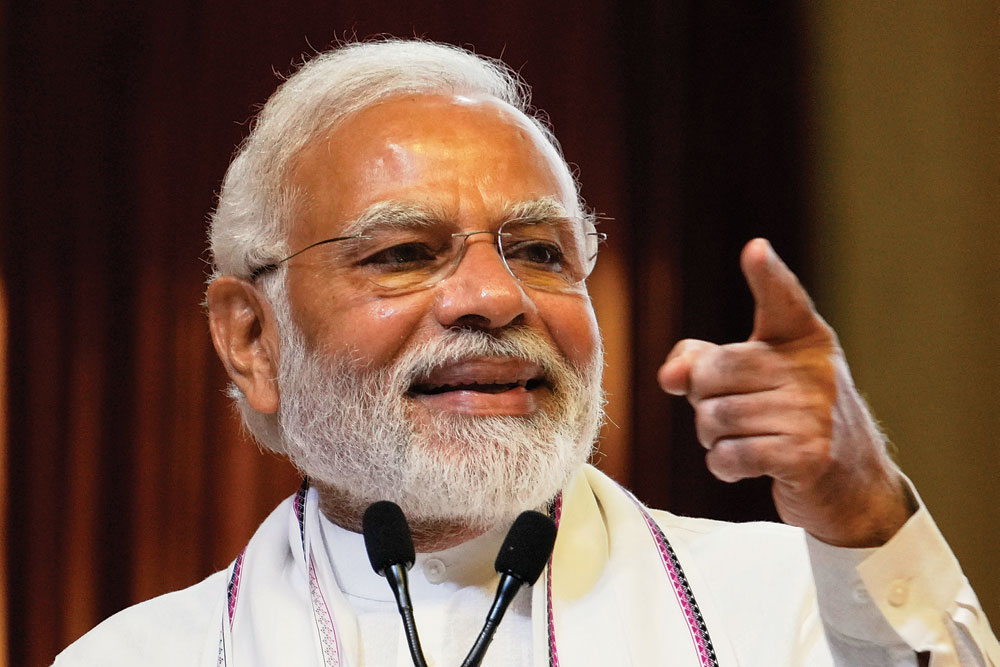 
A promise to recruit one million job seekers in the Central government seems, at first glance, a populist pitch that often resonates at election time. But when the Prime Minister’s Office (PMO) tweeted a four-line announcement on June 14, the decision was not just about filling vacancies and creating new jobs but part of an overhaul of the bureaucracy to make it more responsive to public expectations and an efficient vehicle to deliver government programmes. It was not a coincidence that shortly after the announcement, Prime Minister Narendra Modi was scheduled to spend two days in Dharamshala with state chief secretaries discussing best practices and seeking synergies in the governance priorities of the Centre and the states. The promise to complete the recruitment in 18 months takes it close to the 2024 Lok Sabha polls, providing a whiff of electoral spice that the government will not be averse to. The jobs push also came a day before the defence ministry announced a new track of recruitment that will see 46,000 personnel called “Agniveers” being inducted each year into the armed forces to serve for four years following which 25 per cent will be retained while the rest will receive a parting settlement of ₹ 11.7 lakh. The recruits will also be assisted in training and education as well as possible absorption in the Central government according to plans that are being discussed but have not yet been made public.

A proposal to recruit 10 lakh people can appear contrary to the goal of a leaner government that the slogan “minimum government, maximum governance” promises, but officials familiar with the decision point out that the exercise includes filling vacancies deemed to be necessary and is also accompanied by a job-mapping effort intended to identify gaps and future needs. While details of the jobs to be made available are not known, Central paramilitary forces, railways, police and the postal services are some of the departments likely to induct personnel. The profile of many of the jobs will have a technological aspect in keeping with efforts to modernise government and improve not only public-facing services but also processing and evaluating information on systems increasingly linked to digital platforms. The recruitment process needs to be seen in sync with initiatives like the capacity-building commission headed by former McKinsey hand Adil Zainulbhai which is working on an ambitious plan to overhaul the training and evaluation of the Central bureaucracy with the introduction of regular schedules of knowledge upgrades. The idea is to make training purposeful and keep the civil service attuned to the needs of a modern economy where the digital imprint is growing in all facets of governance. The commission is currently carrying out large pilot projects in departments like railways and postal services designed by in-house experts and are based on the Indian experience. An official assessment revealed that there are dozens of training institutes catering to various departments that are not being fully utilised. Rather than sending officials abroad for expensive degrees and courses where the end use is not clear, it might be better to utilise training facilities within India and send only a select few to foreign institutes, it is felt.


The Agniveer programme will recruit close to 50,000 personnel every year and aims to open the doors to short-term service with benefits. It hopes to reduce the ballooning pension and salary bills of the armed forces (further enhanced by implementation of OROP) and lower the age profile of the three services to the mid-20s. The younger recruits joining after Class 10 will get the equivalent of a Class 12 qualification on exit besides assistance to further their education and vocational training. While a section of opinion feels that this reflects a “militarised” mindset and that recruits trained to use weapons may face a lack of choices once their tenures are over, others feel the programme will inculcate discipline and a sense of patriotism, which in its essentials is not different from the National Cadet Corps (NCC). Such a resource would be more agile in adopting technology and provide reliable credentials for private employers as well. On the question of the ability and commitment of such personnel to fight in testing anti-insurgency or conflict situations, the defence ministry feels that the example of conscription and short-term recruitment in several countries shows that there is no reason to fear underperformance. Though defence accounts for more than a third of the Union government’s capital expenditure, its bills leave it less funds for modernisation than the forces would like. Along with a determined push for indigenisation, the Agniveer proposal should release more funds for essential expenditure.

The jobs push also came a day before the defence ministry announced a new track of recruitment that will see 46,000 personnel called ‘Agniveers’ being inducted each year into the armed forces to serve for four years following which 25 per cent will be retained

The two proposals announced by the government should have a significant impact on the functioning of the 33 lakh-strong civil bureaucracy and the 14 lakh armed forces personnel.

The government is looking to set the ball rolling soon, with the defence ministry expected to release the initial advertisements. The Central paramilitary forces are to follow and BJP-ruled states are also doing the same, with Uttar Pradesh and Uttarakhand having announced their plans. The recruitment to the Army in particular should help cool resentment over Covid-related disruptions that have affected the enrolment process. As selection is closely linked to age bars, there was considerable disappointment over the halt in recruitment. In rural areas near Delhi, it is a common sight to see young men running at all times of the day, timing themselves over distances to ensure they meet the standards set for the armed forces and paramilitary. With assured tenures and improved compensation, these jobs are much in demand and are an added badge of esteem. The government expected that the average age in the Army would fall to around 24-26 from the current 32-33 once the programme had been rolled out for a few years. Defence Minister Rajnath Singh is keen on pushing the reforms speedily and has pointed to the decent benefits Agniveers will receive with more steps being planned to help their post-exit employment.

On the civilian side, senior officials point to the need to motivate the bureaucracy and provide a sense of mission. This is the idea behind Mission Karmayogi, launched by Modi in September 2020, and is rooted in the need to improve quality and capacity in governance. The political underpinnings are clear enough with the Union government already the biggest employer in the formal sector. Its footprint is expected to grow larger and even if it cannot drive employment beyond a point, it will help counter criticism of low employment rates and claims that it is deliberately not filling vacancies. Since he assumed office, Modi has surprised opponents and some conservative commentators as well by refusing to shrink the role of government. Rather, he has expanded the government’s activities and given it a key role in managing Central schemes and framing policy. He has done this even while pushing for disinvestment of enterprises like Air India and a comprehensive asset monetisation plan. In conversations with interviewers he has pointed at his record in Gujarat and said there should be no sense of surprise about his approach once he became prime minister. The role of the bureaucracy has been critical in the rollout of welfare schemes and in reforms that have used services like Aadhaar and banking to reduce graft and target benefits. Modi has been increasingly convinced of the need to strengthen the junior and middle rungs of officialdom while relying on empowered groups of senior bureaucrats as part of a problem-solving approach that was effective during the initial stages of the Covid crisis. Groups of secretaries tasked with procuring and boosting manufacture of protective suits or sourcing certain pharma components helped in cutting through silos that can mar government functioning.

Tracking and generating employment has been an important concern given the political sensitivity of the subject. After an initial mis-start, the Periodic Labour Force Survey (PLFS) is now regularly making its findings public after a lag of around three months and efforts are on to reduce this to one month. The pace of digitalisation is helping faster collection of data and some government experts feel the lag in making it public can be cut. The latest report shows a 0.6 per cent decrease in unemployment rate in 2020-21 over 2019-20, and while debates on official and private surveys continue, the Centre has taken several measures that it hopes will increase job availability. The Covid-driven Atmanirbhar Bharat package provided a fiscal stimulus of ₹ 27 lakh crore and includes long-term schemes. The government also moved to reduce the provident fund burden on employers with an estimated 50 lakh beneficiaries. Some 34 crore loans have been sanctioned to small businesses under the Mudra programme and targeted initiatives for migrants have generated more than 50 crore mandays of work with an expenditure of close to ₹ 40,000 crore. The PLFS shows a gradual increase in the worker-population ratio and a fall in the unemployment rate from 6 per cent in 2017-8 to 4.8 per cent in 2019-20. An emphasis on railways, roads, urban transport, power, telecom, textiles and affordable housing in the national infrastructure pipeline is expected to support employment. An important objective of the slew of measures that includes a concerted bid to encourage the digital economy and promote startups is to prod older businesses into realising the value of being more competitive domestically and in the global markets.

While replies to questions in Parliament reveal that there are more than eight lakh vacant posts, the Centre’s plans to improve the health infrastructure and invest in education at all levels under the several initiatives outlined by the National Education Policy 2020 (NEP) will remain an important focus area for recruitment. The Centre is improving training institutes for teachers to make available expertise for the stress on bilingual teaching in NEP and the need for instructors fluent in various scheduled and foreign languages. The Centre’s plans for a medical school and hospital in most districts also require a massive increase in human resources and there is a new sensitivity in the wake of the Covid experience. The production-linked incentive (PLI) scheme is an important link in the Atmanirbhar Bharat vision and while it looks to support technological innovation and build capacities in areas like semiconductor manufacturing, its application to sectors dealing with widely used consumer products definitely has employment as a key goal.

While details of the jobs are not known, central paramilitary forces, railways, police and the postal services are some of the departments likely to induct personnel. The profile of many of the jobs will have a technological aspect in keeping with efforts to modernise government

The prime minister’s announcement has again demonstrated his ability to dodge political flack and flip issues to his benefit. The opposition has questioned the decision and claimed that previous announcements are yet to be fulfilled. Such dissing of claims is par for the course in politics but once government advertisements begin to appear, the negative commentary will be hard to sustain even if the results are less than perfect. But while his critics look for loopholes, Modi would have moved the discussion on jobs and changed the narrative through the job bonanza the Centre has announced.