The execution of Kanhaiya Lal in Udaipur 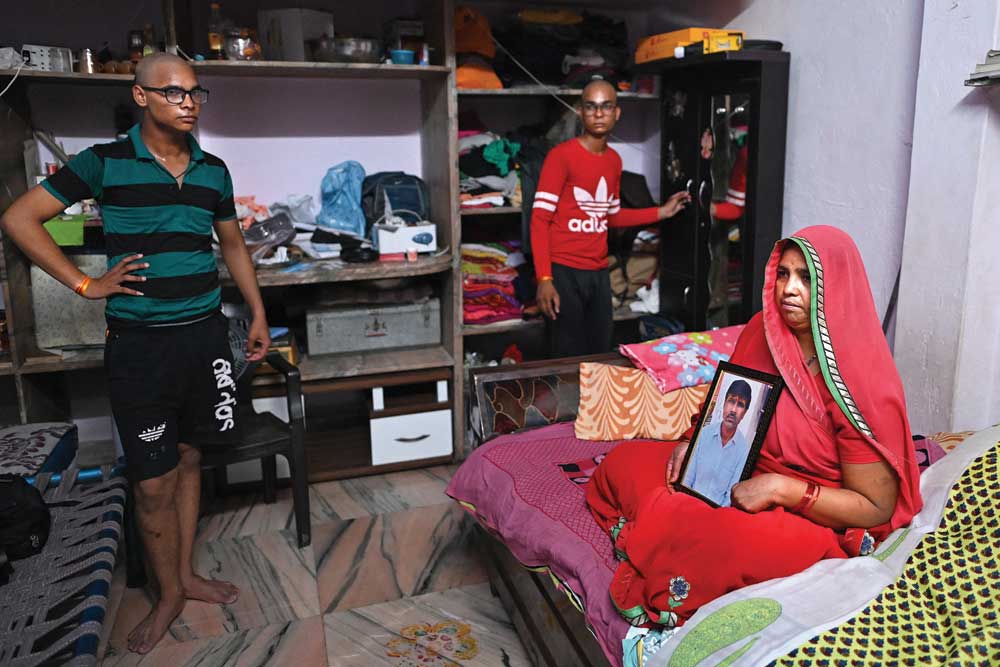 Jashoda Sahu Teli (holding a photograph of her murdered husband Kanhaiya Lal) and her sons at their home in Udaipur, June 29, 2022 (Photo: AFP)


THE ISLAMIC STATE-LIKE execution of Kanhaiya Lal in Udaipur marks a new low. Lal, a tailor, was executed by Mohammad Riyaz and Ghouse Moham­mad for sharing remarks made by former Bharatiya Janata Party (BJP) leader Nupur Sharma on social media. The killers later released a video in which they boasted the barbaric act, including the weapons they used.

That the two were arrested and are certain to be punished is cold comfort for the slain man’s family and for millions of shocked Indians. What is worse is that Lal knew about the threat to his life and had approached the police to help him. There is now the usual buck-passing about protection being provided and then withdrawn after he told the police that he did not need it. The exact details will emerge in the course of various probes that have been initiated now.

Preliminary evidence shows that the two were linked with Dawat-e-Islami, a fundamentalist organisation based in Karachi, Pakistan. One of the two accused even travelled to Pakistan some years ago. The Rajasthan government is treating the crime as a terrorist offence. At the same time, the National Investigation Agency (NIA) has taken over the case.

In the days after the crime was committed, it was condemned by people across the political spectrum unequivocally. But in no time, usual ‘explanations’ for what happened began to be offered. The most notorious being the one that linked the ghastly crime to the ‘atmosphere of hate’ in the country. This was linked to the Nupur Sharma issue. These are dan­gerous arguments that come close to justifying what happened in Udaipur.

For one, any reliance on the ‘atmo­sphere of hate’ theory takes away the agency of the two killers and makes it appear as if they were reacting to circumstances beyond their control. That this is so removed from the truth is obvious from what happened since June 10 when Lal was arrested by the local police and charged under Section 295A of the Indian Penal Code, or IPC (deliberate and malicious acts intended to outrage religious feelings), and Section 153A IPC (promoting enmity between groups and disrupting harmony). The law was taking its course against Lal. Instead, Lal was threatened, his home and his shop were ‘recceed’, and finally, he was killed.

No theory of ‘atmosphere of hate’ can serve as justification for what transpired. But it is quite likely that India’s liberal establishment will try to make a case along these lines in the weeks and months ahead.

Matters have come to such a pass that it is de rigueur to make a symmetric argument between “Hindu hate” and “Muslim hate”, irrespective of the circumstances of the case. Not doing so violates a core tenet of the liberal credo that “Muslim hate” is a product of “Hindu hate”. It sounds awful and incorrect but in this world­view, “Hindu hatred” is generated autonomously while other communities only respond in a cognate manner to the “original hatred”. This intellectual cover has been used in different ways over time. Some years ago, the bogey of “Hindu terror” was cre­ated. But that died down when no evidence was found that such a phenomenon existed. These days, “Islamophobia” is the idea given maximum currency in liberal circles. Conferences and seminars are organised to link it with “Hindu hatred”. Last year, an ‘academic’ forum, “Dismantling Hindutva”, was launched and a conference was organised from September 10 to 12.

In this permissive atmosphere, it is hard to crack down on religiously in­spired terrorism in a systematic man­ner. So far, India has been labelled something less-than-a-democracy. But in case the government decides to go after those who indoctrinate youth to carry out such acts, it is likely to come under even greater pressure from Western countries. So far, it is only civil society and academia in the West that have demonised India as a country where Muslims are persecut­ed. But at some point this will catch up with the policy establishment in those countries as well. It is not inevi­table but nor is it unlikely either.


If the government decides to go after those who indoctrinate youth to carry out such acts, it is likely to come under even greater pressure from Western countries. So far, it is only civil society and academia in the West that have demonised India as a country where Muslims are persecuted. But at some point this will catch up with the policy establishment in those countries as well

What can the government do? The first thing to under­stand is that this is not ordinary violence restricted to a part or parts of India. If religious indoctrination about ‘blasphemy’ is widespread, the probability of violence due to any perceived religious transgression, too, will be high and spread out across different parts of the country. The best way to reduce this in the ordinary course would be to engage with Muslim religious leaders and impress upon them to take remedial steps.

At the other end, BJP and the Rashtriya Swayamsevak Sangh (RSS) are both in the process of tamping down claims about the recovery of Hindu religious places, a point not appreciated by the liberal class. It is, at best, considered a tactical move on the part of an establishment thought to be implacably anti-Muslim. The Gyanvapi controversy in Varanasi is an example. What seemed like an inflammable situation was handled in a gentle but firm manner to the point that it has died down. A district judge is looking into the claims and it remains in the judicial arena. These processes have their own value and should be pur­sued diligently. But matters cannot be allowed to rest there.

Soon, there will be demands for tougher action and crack­downs on such crimes. There will also be demands for tougher laws to handle such cases. All this is already in place and there is little more that can be done, especially by a government already sensitised to the dangers posed by terrorism in all its forms. The trouble is that this infrastructure is useful for the most part after a terrorist act has been committed, not before.

Perhaps a different approach is required. As compared to Western societies where surveillance is omnipresent, legally mandated, and accepted as a necessary price for enjoying freedom, India is hostage to strange arguments made by its ‘civil society’. To give one recent example, there was a furore by activists, lawyers and NGOs when The Criminal Procedure (Identification) Act, 2022 was passed by Parliament. The law permits law enforcement agencies to collect fingerprints, biological samples and other necessary data. A vicious debate, in which the government was put in the dock, ensued and an impression was created that liberty was in danger.

If crimes of the Rajasthan kind are to be reduced (and let’s be clear they can’t be eliminated), it is important to give law enforcers the surveillance and intelligence-gathering tools they need. To cite one example, The DNA Technology (Use and Application) Regulation Bill, 2019, continues to languish. The DNA Bill is just one example but if terrorism is to be checked, unobtrusive and better surveillance and intelligence-gathering are essential. One can always have built-in safeguards (such as regular briefings to appropriate parliamentary committees) to prevent misuse. In the trade-off between heightened surveillance and terrorism, the choice is clear, at least to ordinary citizens who want to lead normal lives. The trouble is that ordinary citizens have no voice in these matters while ‘civil society’ and activists call the shots on what is acceptable and what is not. With their global reach and the nutcracker lever that can be exerted on the government, the chances of any progress on this front are bleak.