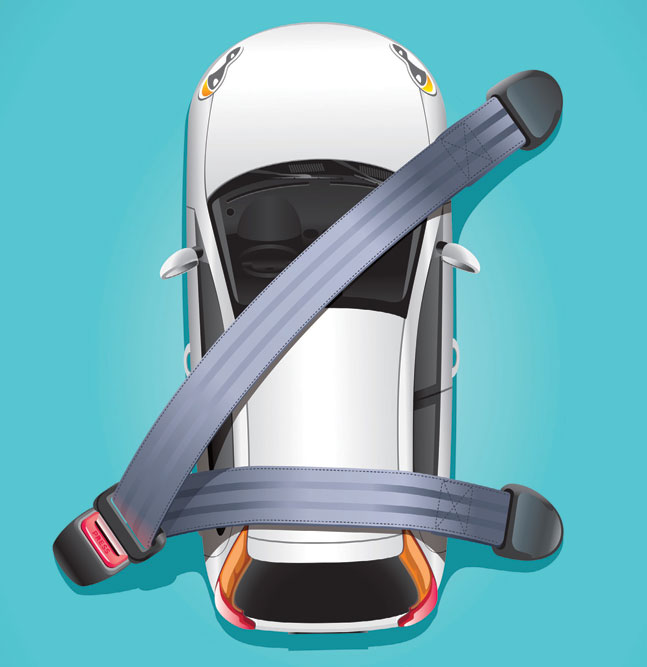 
THE DEATH OF FORMER TATA SONS Chairman Cyrus Mistry in a car crash on NH48, en route from Gujarat to Mumbai, on September 4, is a too-familiar tragedy that has forced a reckoning with the state of our roads and our driving behaviour. As we mourn the loss, let’s spare a thought for what the investigation has revealed so far. The Mercedes SUV that Mistry and his three co-passengers were travelling in was speeding at over 100 kmph, on roads that weren’t engineered for that speed. The driver, Dr Anahita Pandole, lost control of the car at a spot on a bridge where the road narrows from three lanes to two, slammed the brakes and hit the divider at nearly 90kmph. Despite the severe frontal collision, the two front seat passengers survived the crash, while those at the back—Mistry and his friend Jehangir Pandole—were likely thrown forward, and died of internal injuries. Speeding, driving unbelted, and being unable to react in time to the poor design of that stretch of road combined to make it a fatal accident.

With an alarming number of road accidents, India tops the world in deaths and injuries from collisions. Over 5 lakh accidents happen every year, and they result in 1.5 lakh deaths, and three lakh serious injuries, accounting for, according to the World Bank, 11 per cent of global deaths from road accidents, even though India only has 1 per cent of the world’s vehicles. According to National Crime Records Bureau data, over 1.55 lakh people lost their lives to vehicular crashes in 2021—the highest ever reported for any calendar year. “The number of crashes has come down drastically over the past decade, but every year, we see an increase of 2-3 per cent in the number of deaths. This is a cause for concern. This means that for every crash, there are more deaths. What this shows is that our roads are getting better but they are not foolproof in terms of safety,” says S Velmurugan, chief scientist, traffic engineering and safety, Central Road Research Institute (CRRI). The highway where Mistry died was expanded from four to six lanes several years ago, but the bridge was not widened. Even in the construction of newer greenfield expressways like the Bundelkhand Expressway, road safety norms such as crash barriers and 12-20 metre medians have been flouted for no justifiable reason. Many roads, including highways, are not diligently safety-audited although a Supreme Court ruling makes it compulsory to do so. It is no wonder then that highways account for 56 per cent of crashes in India, about 57 per cent of deaths and 60 per cent of serious injuries. In the wake of Mistry’s death, the Central government has avowed to fix infrastructure issues on highways and imposed a fine for not wearing seat belts in the rear seat. Cars may soon be required to embed an alarm for rear seat belts, additional airbags and other safety features. Improving road and vehicle safety, however, is easier said than done in a country that runs on old cars and aims to lay 60km of highway per day. “All said, if you aren’t adhering to the speed limit on a highway, you are most certainly risking your life,” warns Velmurugan.


Another way to address the problem is by using AI (artificial intelligence) technology to improve driver behaviour. “We catch a lot of sleepy drivers on our dashcams and use the information to train them,” says Nisarg Pandya, founder of driveBuddyAI, an intelligent driver and fleet safety tech startup. The company uses two cameras, one forward-facing and the other driver-facing, to do two things—assess road conditions and alert the driver of collision risks and other dangers in time for them to avoid an accident, and assess the behaviour of the driver to help understand his state of mind. “Truck drivers cover anywhere between 300km and 1,000km a day. So, it’s a lot more important to target their safety than that of a car owner who may be driving 30km a day. At driveBuddyAI, we have been working on a protocol for trucking companies to help them ensure their drivers are adequately rested, efficient and safe on the roads,” Pandya says. Their product is a basic version of an Advanced Driver Assistance System (ADAS), the technology that also powers autonomous vehicles. ADAS aims to reduce human error in driving by using AI to accurately detect pedestrians, scan blind spots, and watch out for traffic signs, lane departure and driver drowsiness. The systems issue audio alerts, sometimes accompanied by text, helping the driver to take immediate action to avoid accidents. Some of these systems are additionally equipped with an automatic emergency brake. ADAS is increasingly being integrated into high-end cars such as the one Mistry was in when he died. In India, Mahindra & Mahindra Ltd is among the first automakers to introduce it in a non-luxury SUV, the XUV700.

A four-year-old startup, driveBuddyAI has sold 500 units at `50,000 a piece including access to cloud data and driver management services for a year. Starting with cargo fleets, the company is expanding to passenger vehicles and conducting pilots for bus and cab operators. There are orders for about 500 more units, Pandya says. “We have seen an unprecedented increase in interest in ADAS deployment of late for many reasons. Some industries like the hazardous chemical industry are making it a part of compliance. There is also a shortage of drivers in the cargo market, so fleet owners are more interested in training drivers. The return on investment is justified for fleets—we have saved them a lot of accidents in under two years. We have a 24×7 helpline, and when we spot a driver who is falling asleep at the wheel, we alert the fleet owner, ask them to send a replacement, and counsel them on who among their drivers is suited for night driving,” says Pandya. With 40 lakh km and counting of geo-tagged video data on Indian roads, Pandya and his colleagues are building an intelligent map showing realtime road conditions. “The long-term dream is to eventually use AI to better understand not just Indian roads, but also human decision-making,” he says.

LAST YEAR, ADAS was deployed in 250 public buses on Nagpur city roads as an experiment that brought together several stakeholders, including the Central government, CRRI, NGOs and automobile and AI professionals. The preliminary results from the pilot, named iRASTE, are just coming in, and they are encouraging. “One way to measure effectiveness is to look at the number of alerts per driver. For a month after installation, the alerts were on quiet mode so that the drivers couldn’t see or hear them, so this first month became a baseline for us. The second month onwards, we enabled both audio and text alerts for drivers–for impending dangers like jaywalkers, forward collision and side collision. And within another month or so, we saw a 50 per cent reduction in the number of alerts,” says Varma Konala, project lead at iRASTE and CEO of Applied AI Research Centre (INAI) at IIIT Hyderabad. Konala is on deputation from Intel Corporation, where he works on smart devices. The iRASTE project uses an ADAS developed by Mobileye, an autonomous driving technology company that was acquired by Intel in 2017. One big learning from the exercise, Konala says, is that “you cannot just deploy technology and forget about it”. “I was in Nagpur last week overseeing a week-long training session for 400 drivers. This is the second session we have organised. We observed that after ADAS was installed, their driving improved drastically, but then again, in a month or two, they started slacking–they wouldn’t always act on the alerts. Drivers need constant reinforcement, so now we have WhatsApp groups and monthly incentives for the top five drivers.”

With Mahindra and Intel, the INAI team has compiled a data set on Indian roads, comprising 10,000 images taken by dashcams of cars that drove around Hyderabad and Bengaluru, to explore problems of autonomous navigation in chaotic traffic environments.

With the daily data generated by buses running iRASTE, the team not only identified 37 black spots where accidents regularly occurred, they were also able to predict “grey spots” or potential problem areas and intimate the transport department and traffic police. The iRASTE team is pushing for improvements to be made in the road geometry at such risky spots. “Besides giving the government a blueprint on the condition of the roads, we are working with an NGO to sensitise paanwalas, shopkeepers and others who work around risky spots,” Konala says. In July, iRASTE was launched in Telangana, where it has been deployed on 200 TSRTC buses. The focus is on highways rather than city roads.

Since logistics makes up 14.4 per cent of the country’s Gross Domestic Product and impacts nearly all industries, it makes business sense to invest in technology that can not just prevent accidents and ensure the safety of drivers, but also lower operational costs, says Vidit Jain, co-founder, LocoNav, a fleet management company. LocoNav’s ADAS and driver-monitoring systems come bundled with incident footage on the cloud to help clients skill their drivers. “Any incident with commercial vehicles may cost lives, livelihoods, and losses to many,” says Jain. “Our AI-driven solutions have been designed to help drivers course correct in real time and to help fleet operators skill their workforce.”

A combination of real time monitoring and post-facto analysis of not just driver behaviour but also road infrastructure is key to reducing accidents and fatalities. In 2016, SaveLIFE Foundation and Mahindra & Mahindra Ltd. partnered with the Maharashtra government to reduce deaths from vehicle crashes on the Mumbai-Pune Expressway from an annual average of 135 to zero by the year 2021. The success of India’s first Zero Fatalities Corridor, say people who were involved with the project, comes from a multi-pronged strategy that included advocating for truck rest stops, displaying emergency exit and hospital signs prominently, deploying patrol vehicles and cameras to prevent illegal parking and speeding, and enforcing seat belt wearing. If the Ministry of Road Transport and Highways is serious about its stated goal of halving road accident deaths, it would do well to treat the entire road network as a focus area.