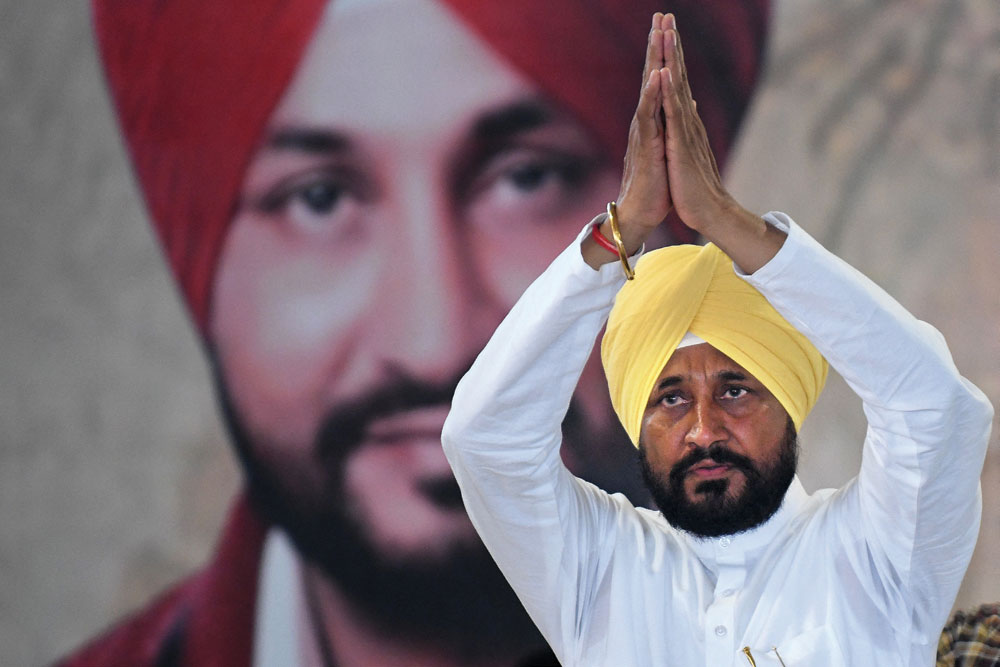 
PUNJAB CONGRESS CHIEF Navjot Singh Sidhu finally had his way on November 9th when the state government replaced Advocate General APS Deol. The state’s Director General of Police (DGP) IPS Sahota, too, may be on his way out after Chief Minister Charanjit Singh Channi announced the state government had sent a list of names for the position to the Union Public Service Commission (UPSC). With this, the cold war between Sidhu and Channi seems to have come to an end.

Has it? If anything, it is one of those patch-ups for which Punjab politics, especially the state unit of Congress, is becoming infamous. For many years now, Sidhu has been gunning for his rivals in the party, be it former Chief Minister Amarinder Singh or an allegedly recalcitrant Channi, who did not give in to the former cricketer’s demands. Just days before he was asked to go, Deol shot back at Sidhu following his repeated public barbs against the advocate general. In a letter on November 7th, Deol said: “Shri Navjot Singh Sidhu is spreading misinformation to gain political advantage over his political colleagues.” He also hinted at “vested interests” to malign the functioning of Congress in the coming elections. His target was obvious. Deol’s end came on November 8th when the party high command intervened once again—in Sidhu’s favour—when the in-charge of the state unit Harish Chaudhary met Channi.

The contrast between the two leaders is one of populism and pragmatism, as much as the current political climate in Punjab permits. The very day that Deol’s ouster was announced, Sidhu made remarks to the press near the integrated checkpost near Kartarpur Sahib. There, he once again demanded that the corridor be opened. “This is a corridor of infinite possibilities and it helps in people-to-people contact.” This was just one example of Sidhu’s attempt to direct the state’s politics towards religion, even if it was couched in popular demand. The ouster of the state’s advocate general, too, was based on the issue of sacrilege of Sikh religious texts many years ago. The advocate general’s crime was that he defended a former DGP of the state in the high court in a case related to the issue.

In this, Sidhu has succeeded to a great extent. In the months before the ouster of Amarinder Singh, the sacrilege issue was lukewarm to the point of being not a political weapon. After a copy of Guru Granth Sahib went missing from village Burj Jawahar Singh Wala in Faridkot district in June 2015, a number of cases of sacrilege—pages of the holy book being torn and strewn around—was reported from the state. A number of investigations and inquiries went nowhere. This led to a climate of conspiracy theories in the state but at no point did it become an electoral issue, until this year.


Since then, Sidhu has tried to keep this issue alive even as the new chief minister has focused on “secular” issues, such as re-establishing the party’s contact with people—one of the grouses against Amarinder Singh was his inaccessibility. In the months since he became chief minister, Channi has travelled the length and breadth of Punjab. He has also settled various outstanding administrative issues that kept hanging during the former chief minister’s tenure. He has, so far, not tried to focus attention on any religious matter.

The result of this infighting and pulling in different directions is a message of ideological confusion on the eve of elections. While Punjab is not a state where the secular versus religious divide plays out, it has always been susceptible to the mixing of Sikh religious issues with politics. The outcome of this mixing is always unhappy. But that has not deterred Sidhu.

While Sidhu is trying his hand at political populism, the state finds itself in the vortex of equally damaging economic populism. Nothing illustrates this better than the fuel price reduction issue.

On November 4th, the Union Government reduced excise duties on petrol and diesel by ₹ 10 and ₹ 5, respectively, to help reduce the galloping prices of these fuels that had hit people hard. The opposition was quick to claim victory: its “pressure” on the Government forced a price reduction. In reality, it was the additional comfort of higher inflow of taxes (such as GST) and moderate expenditure that allowed the step without causing fiscal imbalances.

This had a political ripple effect across states, especially opposition-ruled states that, too, came under pressure to reduce state-level taxes on fuels. While most such states ducked pressure, Punjab found itself in political heat as elections were just round the corner. But there was a twist. On November 7th, four days after the Centre reduced prices, Punjab followed suit with an identical price reduction. But Channi was not happy. Speaking to reporters in Chandigarh on November 7th, he said, “It is really unfortunate on part of its [Centre’s] leadership to slash prices of petrol and diesel by ₹ 10 and ₹ 5 , respectively, from November 4th, thereby cutting down the excise duty, which adversely impacts the income of all states, including Punjab, having 42 per cent share in the excise duty collected by the Centre.”

Channi’s lament had administrative merit but it was a cry in political wilderness. What was not publicised was the cost of the entire package of fuel reduction to Punjab’s distressed economy. The reduction in petrol price cost the state ₹ 1,352 crore, and that in diesel, ₹ 1,952 crore, in terms of VAT revenue foregone. When the “loss” from the Centre’s excise duty cut is added, another ₹ 857 crore is shaved off from the state’s revenue. The total cost: a tidy ₹ 4,161 crore. The price reduction by the state amounts to nearly 55 per cent of the state’s revenue from sales tax/VAT for 2021-22, throwing its tax calculations haywire. Punjab had estimated a collection of ₹ 6,028 crore from sales tax/VAT in 2021-22.

FOR RICH STATES like Maharashtra and Gujarat and even states with a larger revenue base such as Uttar Pradesh, such populist measures—while fuelling economic populism—don’t damage their economies. In Punjab, the economic situation is dire. In 2021-22, the state’s budget has been shored up to a great extent by Central help. Central grants-in-aid (₹ 38,038 crore) are higher than Punjab’s own tax revenue (₹ 37,434 crore). While 2021-22 is an unusual year—the Covid-19 pandemic necessitated Central help—Punjab’s direct and indirect help from the Centre is substantial. In recent years, whenever the share of the state in Central taxes and grants-in-aid has gone up, its overall revenue position has shored up. In years this does not happen, balancing the state budget gets hard. The huge injection of Central money in the form of Minimum Support Price (MSP) for wheat and rice is another lifeline to the state, one that is not acknowledged as help but is thought of as a “right” of the farmers. Against this backdrop, even a ₹ 5 and ₹ 10 reduction in diesel and petrol prices is sufficient to hit the state hard.

This, however, is at odds with the “reformist” message the chief minister tried to convey just days before the fuel price reduction at the Progressive Punjab Investors’ Summit in Ludhiana in late October. This was the fourth edition of the summit, but the results were lukewarm. While the overall “commitment” of the private sector to the state, as announced at the end of the summit, was ₹ 6,700 crore, the sum is modest when compared to other states that hold similar investment promotion drives. In fact, the “highlight” of the summit was a ₹ 80 crore investment by a South Korean company. The pattern of investments is revealing: golf courses and residential units among other items, but not industrial investment that the state government so covets. A part of the reason lies in the populist climate of the state where industry is often at a disadvantage in areas such as electricity tariffs. The farmers’ agitation—which took a distinctly anti-industry hue—added to these woes.

It would be a mistake, however, to look at this as just an economic issue. The problem is political. To give another recent example, in his letter of October 15th to Congress President Sonia Gandhi, Sidhu demanded “justice” for Punjab. The letter demanded cheap electricity for everyone. He suggested low industrial tariffs, cheap electricity for domestic consumers and free power for farmers, something that is impossible in reality. He also strongly affirmed that farm reform laws would not be allowed in the state, and wanted the state government to openly say they would not be implemented in the state. It is another matter that last year, the state Assembly resolved not to allow the Central laws in Punjab. Sidhu also demanded that power purchase agreements (PPAs) with private companies be scrapped as these were unfair to Punjab.

The huge injection of central money in the form of minimum support price for wheat and rice is another lifeline to the state, one that is not acknowledged as help but is thought of as a ‘right’ of the farmers

As Punjab gets closer to elections, three trends are clearly visible. One, the state remains firmly in the grip of populist ideas—political and economic—and all parties are trying to outbid each other on populism. The attraction that many people in the state hold for the Aam Aadmi Party (AAP) is due to the so-called “Delhi model”, whereby people get free electricity and water along with other freebies. Sidhu’s demand for cheap electricity for everyone is in part a response to AAP. But no one has bothered to compare Delhi, a city with better revenue management and a much larger fraction of paying population, with the very different situation in Punjab. Two, Congress—after the ouster of Amarinder Singh—has limited the damage to an extent. Its rivals—the Shiromani Akali Dal (SAD) and AAP—are either geographically limited to a part of the state or have an uphill task convincing people that they can give them more. Governance as an issue is not salient to Punjab. Three, the infighting in Congress, however, stands to spoil its chances if it does not take corrective steps soon.

Ever since terrorism ended, Punjab has always given a decisive mandate to the party that gets to govern the state. But unlike in the past, this time a multi-cornered contest is likely across the state. While Amarinder Singh’s party is yet to get its act together, SAD and AAP continue to trade in their traditional tropes to attract voters. Congress is busy infighting. As of now, Punjab is yet to declare its intent clearly.