In a relief to Indian students, Ukraine holds convocation in Delhi, awards more than 500 MD certificates 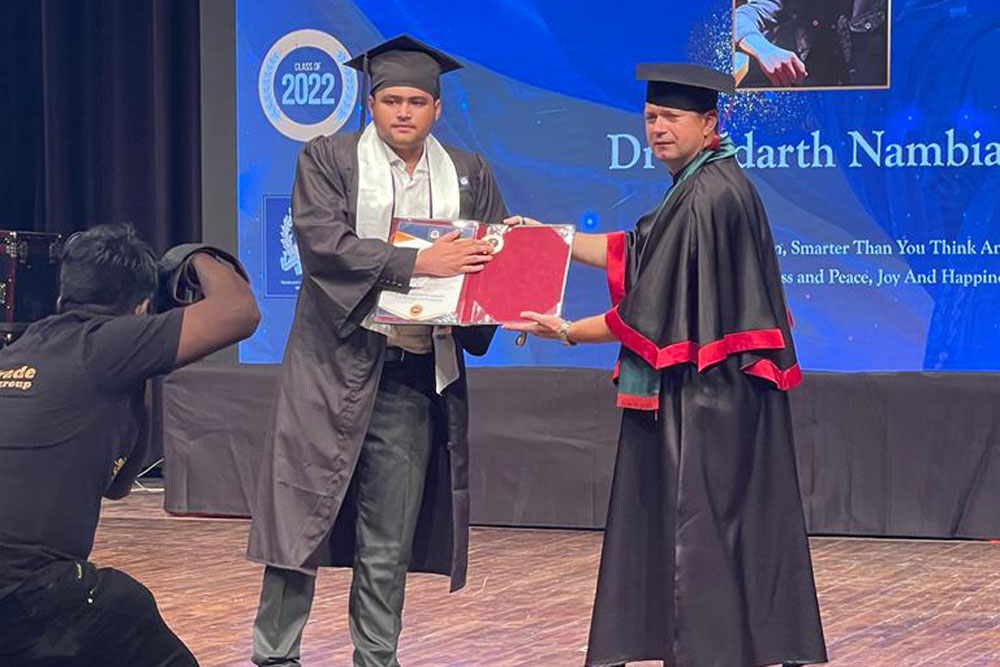 One of the students, Siddharth Nambiar from VN Karazin Kharkiv National University, at the Delhi convocation


In what comes as a major relief amidst uncertainty, Ukrainian authorities have held a convocation in New Delhi where they awarded MD certificates to more than 500 medical students who had finished their final-year exams before fleeing from their respective universities and institutions in the war-hit eastern European nation in March.

The embassy of Ukraine in India described it as a “solemn” ceremony because of the ongoing bloody war back home. Held on August 27, the students who received their certificates after their six-year MD degree from various parts of India belonged to three institutions: Kharkiv National Medical University, VN Karazin Kharkiv National University and Kyiv Medical University. Many of these students, except those from the medical school in Kyiv, had to take shelter inside Kharkiv’s underground metro trains and bunkers underneath buildings for days to escape air strikes and to avoid being caught in the crossfire between the warring Russian and Ukrainian forces before they could be evacuated to safe zones and later flown back to India.

Kharkiv National Medical University and VN Karazin Kharkiv National University used to attract thousands of students every year to Kharkiv, the second-largest city of Ukraine that, until the war began, was home to close to 1.5 million people. It had come under heavy shelling and was the site of fierce fighting between the armies of the two countries.

Ukraine had waived KROK tests for these final-year students factoring in the extraordinary situation back home – students typically needed to pass these tests to get their licence as a foreign student to practise medicine in the European Union. According to the website, Ukraineeducation.org, KROK-1 test is to be given by the medical students of Ukraine after finishing the third year and KROK-2 on completion of the sixth and final year.

Kochi-based Siddharth Nambiar, a student of VN Karazin Kharkiv National University who received his MD certificate at the recently organised convocation in Delhi, told Open that he was overwhelmed to see his dean come all the way to India to attend the function despite the ongoing war. “I dream of returning to Ukraine at least one more time,” he says. Russia invaded Ukraine on February 24 in a major escalation of the regional conflict that had begun as early as 2014, leading to the annexation of the Crimea. Over the past six months, the war has left thousands of people, including many civilians, dead on both sides and displaced more than 1.5 million people.