Can Rohit Sharma’s reinvigorated team undo a decade of hurt by winning the T20 World Cup? 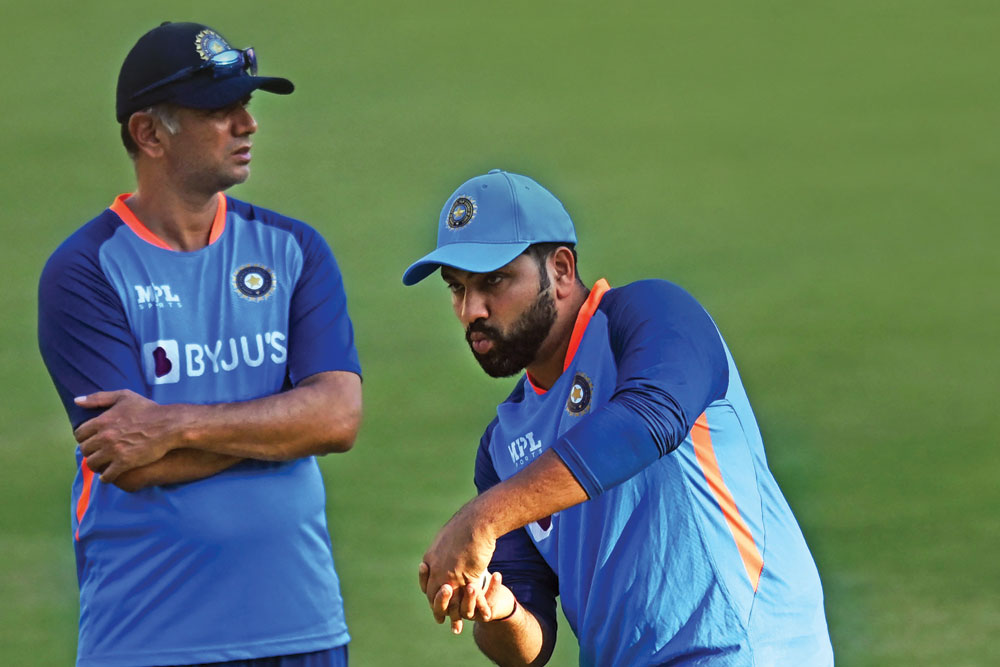 
WHAT TRULY BEGGARS belief is the fact that Rohit Sharma, then just out of his teens and playing in his first T20 International tournament, managed to win a World Cup for India a good four years before Sachin Tendulkar did. At the T20 World Cup in 2007, Sharma wasn’t simply there to make up the numbers either; if not for his death overs heroics in the final at Johannesburg (he was the second-highest scorer after Gautam Gambhir, bailing the team out of the hole that was 111 for 4 in the 16th over of the target-setting innings), Pakistan and not India would have won the inaugural edition of the 20-over World Cup.

So, well before Sharma restructured the scope of ODI cricket with three double hundreds and well before he turned into the Indian Premier League’s (IPL) most successful captain with five titles, there was the 16-ball 30, scored in front of the likes of Shah Rukh Khan and Lalit Modi, future IPL team owner and commissioner respectively, in attendance at the Wanderers that day to see for themselves what the fuss over 20-over cricket was all about. Sharma neon-lit the audacity of the future with a knock so ahead of its time that Virat Kohli was still four months away from playing for the junior Indian team at the U19 World Cup.

The limitless possibilities of the T20 format were soon realised by both the billionaires and the billions of India, and a limitless appetite for franchise cricket set in with great urgency. Yet, even as the country turned into the go-to destination for effortless sixes and cunning bowling variations, future Indian teams seemingly designed to reign supreme in the shortest format failed to add to the 2007 title; this despite the International Cricket Council (ICC) having conducted a T20 World Cup at a frequency of once every other year. Later this month, the eighth World Cup in this format will be played in the space of 15 years—significantly, the second in the space of 10 months.

Just last November in the UAE, an Indian team helmed by Kohli and coach Ravi Shastri failed to get to the semi-finals, also losing to Pakistan for the first-ever time in a world tournament (in 13 attempts) along the way. This caused a near-immediate regime change, with the selectors turning to who else but the only active player to have won one of these things, Sharma. (The evergreen Dinesh Karthik, who finds himself in the squad for the upcoming edition in Australia at the age of 37, also featured in the first T20 World Cup but wasn’t in the playing 11 for the Wanderers final.) To aid Sharma, in came the great Rahul Dravid as coach, a legend who had personally tutored most of the current Indian squad before they made it up here, while they were still in India’s age-groups and India A (a B-team, really) set-ups.

Both Sharma and Dravid were keen to make a difference, both acutely aware that a change in leadership alone wasn’t enough. They needed a change in ideology as well. “After the previous T20 World Cup in Dubai, when we didn’t qualify for the semi-finals, we felt that there needed to be a change in our attitude, in our approach in how we play the game,” Sharma said during a studio show on Star Sports. “So, when he (Dravid) became the coach, we sat in a room for a while and discussed how we want to take this team forward.”


How was that, in theory at least? “We wanted to change our style of cricket. We wanted to play in a certain way in all three formats and he was willing and ready to accept all of that. He was luckily on the same page as me so it made it a little easier for me to give out a clear message to the boys.” That ‘clear message’ and ‘change in style’ were one and the same—aggressive cricket, even if it comes at the cost of losing the odd inconsequential game. And it was precisely this all-or-nothing attitude that allowed Sharma to take Mumbai Indians to unprecedented heights in IPL, often following a late-season, do-or-die surge towards the trophy.

Fans of the Mumbai franchise were certain that Sharma was the answer to India’s now-long drought at the World Cups (across both formats). And Sharma was certain that a collective approach of aggression was all that was missing; evidently so sure of forthcoming success that he went on to say on the same show: “I’m looking forward to achieving something really, really great under Dravid’s coaching.”

It hasn’t quite worked out that way. Yet.

The good stuff first. Since taking over as India’s full-time captain at the end of the previous T20 World Cup in November last year, Sharma has won 77 per cent of all the T20Is that India has played, including series wins in each of the seven bilateral face-offs in this period—twice against the West Indies and once against each of New Zealand, Sri Lanka, England, Australia and South Africa. These are ridiculously good numbers, however one tilts the prism. But at the Asia Cup played over August and September of this year in Dubai, a tournament closely resembling the upcoming World Cup in format and mainly due to the presence of multiple heavyweight nations, Sharma’s side capitulated in the round before the final known as the Super Fours, losing convincingly to the eventual finalists, Pakistan and Sri Lanka, respectively (they did beat Afghanistan).

The exposed cracks (the usual things—team balance, who to play as all-rounder and the choice of wicketkeeper between Karthik and Rishabh Pant) could not be immediately papered over, and Sharma soon found himself defending both his strategy and players at the press conference in Dubai before India’s departure for home. Is this team prone to a bout of nerves in crunch situations as well, he was asked. Sharma shook his head and smiled wryly.

“I don’t think there’s anything wrong, it looks like it from the outside, but we don’t look at it that way,” he said. “But as far as the team is concerned, you can go in [to the dressing room] and see—all the boys are relaxed and chilled. We need to have such an atmosphere whether you win or lose.”

Thanks to Sharma’s and Dravid’s guidance, the boys surely are ‘chilled’. So much so that a cooler, unburdened-of-leadership Kohli managed to not just find the form that was missing between 2019 and now in 2022 (his last few years as captain) but he also struck his maiden T20I century, coming against Afghanistan at the Asia Cup last month. Not just Kohli, the likes of Suryakumar Yadav and Arshdeep Singh have blossomed such that they can single-handedly take the match away from India’s opponents on their day.

Both Sharma and Dravid were keen to make a difference, both acutely aware that a change in leadership alone wasn’t enough. They needed a change in ideology as well

Sharma, however, is not just inspired by the upward rise in performance of most of his colleagues; he seems to be mostly driven by his lowest points. And none got lower than being left out of the squad for the 2011 World Cup (50-overs) that was held in India, one that the hosts ended up winning under Mahendra Singh Dhoni in Mumbai—Sharma’s hometown of all places. Watching from the outside was not easy. After smashing his record-breaking fifth hundred at the 2019 World Cup at Leeds, a knock that immediately placed India in the semi-final against New Zealand though they ended up losing over two rain-struck Manchester mornings, Sharma clicked his tongue and called missing out on playing at home with the team in 2011 “very disappointing”, but “it’s been eight years now since it happened”.

All the IPL trophies in the world (and he has won more than all others) haven’t helped tide over the fact that he is yet to win a world title for India, in his prime that is. But Sharma is now in a position to change that, the reins of destiny firmly set in his hands. And that turnaround in fortune can be ushered in as quickly as November 13 next month, the night of the upcoming T20 World Cup final in Melbourne.

To change his narrative, as far as winning World Cups is concerned and making a dash towards the cup next month, Sharma will be armed with most things new—a fresh new philosophy, approach, think-tank, and a refreshed group of players that he has already begun to shape in his image. But to pull off what his teammates haven’t in the past—winning the T20 World Cup—Sharma will have to tap into personal knowhow that is old; so old that that knowledge lies at the very beginning of a glorious 15-year career.