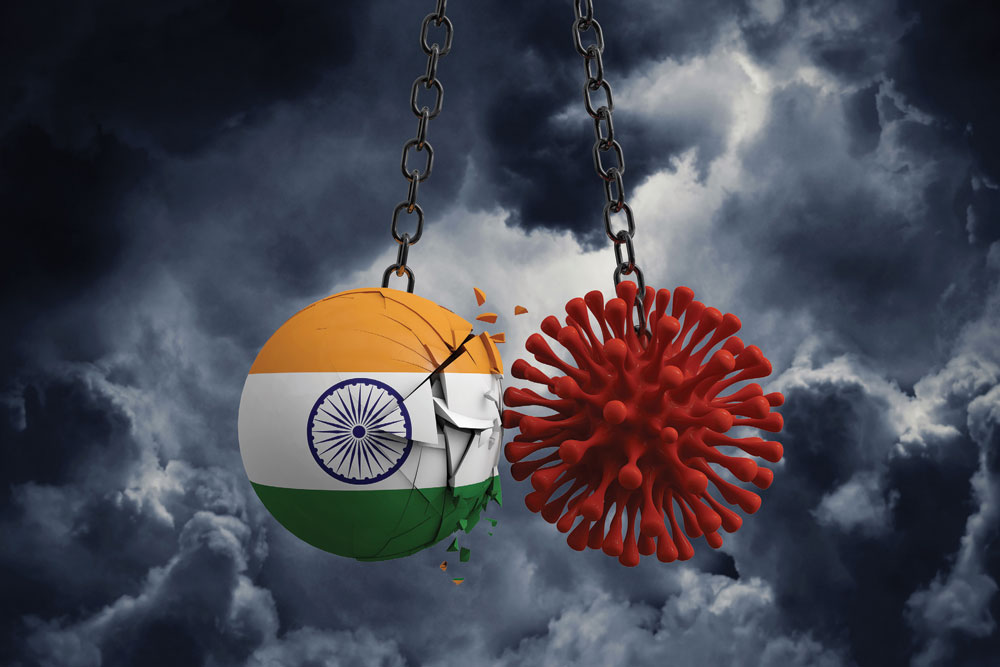 
AS EXPECTED, THE NEWS ON MONDAY, MAY 31ST, was not grim. India had contracted by 7.3 per cent in 2020-21, a shade better than the 8 per cent contraction hinted at earlier in the year when estimates were put out. By March, the fourth quarter of the year, the economy had entered the positive growth territory: that quarter saw 1.6 per cent growth in GDP.

But that is not a cause for celebration either. The fact remains that India has had a mixed bag over the past year. Falling off a cliff (24 per cent contraction in the first quarter) followed by a steep climb back towards normalcy. This return to normalcy has once again been impeded, if not halted, by the second wave of the pandemic that has led to regional lockdowns during the same period as last year. The effects of the second series of lockdowns will only be known later in the year when data is available. It is safe to say India has lost more economic steam, once again.

There are, however, positive takeaways from the data, including ones that show that steps taken by the Government last year arrested the economic decline to some extent. For starters, agriculture turned out to be the only sector of the economy that did not see contraction for the entire year and turned out to be the mainstay of the economy. By the end of the year, in the fourth quarter, manufacturing recovered smartly and grew at 6.9 per cent (on a year-on-year basis). Construction, perhaps the most important sector in terms of low-skill employment, grew at a rapid 14.5 per cent in the fourth quarter. Even services, the sector scarred badly, contracted by just 2.3 per cent in the final quarter of the year. Except agriculture, all these sectors had fallen off the cliff in the first quarter. Construction had contracted by a phenomenal 49.5 per cent while the services sector was decimated at (-)48 per cent during the same period.

This recovery, however, is likely to come to a halt in the first quarter of the current year. For the better part of April and the whole of May, most states have experienced some form of lockdown or severe restrictions on work. With reopening being carried out carefully, it will be another month before economic engines can rev up again. Problems of broken supply chains are one matter but the far bigger issue is the huge gaping hole in demand. That is a problem that defies any easy solution as the combined effect of job losses, precautionary savings and uncertainty are likely to ensure that people will not return to spending quickly. Unlike last year, when the pent-up demand ensured revival during the festival season and after that, this year the middle class has seen its healthcare expenses shoot up as the second wave affected it disproportionately as compared to last year. This is likely to lead to higher savings by households, an important source of demand in the economy.

There are two distinct sets of problems that the Government has to solve. At one level, the issue is that of an appropriate monetary and fiscal policy mix. Here the Government has displayed a great deal of caution—most people will describe that as reluctance—in “spending its way out” of the economic crisis. Last year, it was for a good reason: with a services-dominated economy, it made little sense to engage in an extensive fiscal stimulus when the real problem was evaporation of demand due to the national lockdown. This was amply borne out by the data released on May 31st. In GVA terms, trade, hotels, transport, communications and services witnessed a collapse at (-)48.1 per cent in the first quarter of 2020-21. This “fall” was contained in the second quarter of FY21 at (-)16.1 per cent. Even by the last quarter of the year, it remained in the red at (-)2.3 per cent (all comparisons with the same period in 2019-20).


This problem persists even today. With the much more intense second wave of the pandemic, this demand is likely to dip further in the first quarter of this year (FY22) when compared with the previous quarter (Q4 FY21). This may not be a ‘legal’ comparison since, in India, comparisons are year-on-year (y-o-y) and not based on successive quarters. In this case, the y-o-y comparison may not shed light as in the first quarter of FY21 India was in a national lockdown while this year the lockdowns have a much more variegated quality to them.

Finance Minister Nirmala Sitharaman was asked about the difficulties faced by the sector in a recent interview in The Times of India. Her answer was couched in administrative terms but reflected the economic difficulty in helping out the sector. She said: “I tried it in the pre-Budget time. We had extensive consultations but couldn’t bring a formulation which could work. In fact even during the final days we met hoteliers but we could not arrive at a formulation. However, we did open up the ECLGS for smaller hoteliers. I fully agree that hotels, tourism, hospitality and all the contact-based industries have suffered.” Sitharaman is right: there is little the Government can do about a demand collapse. What can be done is to ensure that companies don’t collapse due to financial reasons, such as inability to repay loans, access credit and the like. That has been done.

Right from the beginning of the crisis, the Reserve Bank of India (RBI) has kept its policy rate low even as it has ensured credit availability does not become a problem. But there is a hard upper limit to what the central bank can do when the issue is one of uncertainty. Beyond a point, households and businesses will not borrow and banks will be unwilling to lend. In fact, economic agents will undertake precautionary savings. Last year, a stimulus was not an option as a large part of the economic collapse was due to services; this year, because the middle class has been affected due to rising healthcare costs from a much more severe second wave of the pandemic, precautionary savings are likely to go up with a vengeance.

The RBI has another problem at hand: inflation. For most of the past years, inflation remained benign but this April, the Wholesale Price Index (WPI) rose to a decadal high of 10.5 per cent even as the Consumer Price Index (CPI) averaged around 5.8 per cent over the last one year. It’s worth noting that this figure is well above the RBI’s headline inflation target of 4 per cent.

The middle class has seen its healthcare expenses shoot up. This can lead to higher savings by households, an important source of demand

So far, the RBI has maintained an “accommodative stance” on monetary policy out of growth concerns in what has been a very difficult year for the Indian economy. But now, after nearly six years, real interest rates are in negative territory. There is more: global commodity prices have begun to harden since April last year. From that time—when they were at their lowest in the recent period—they have gone up by an average of 80 per cent. This is acutely visible in India, where fuel prices have begun hovering in the Rs 90-100 per litre range.

In a normal year, the RBI could quickly dampen these trends by raising interest rates. But India has hardly been normal since March 2020. Any reduction in interest rates could spell trouble on the growth front. But ultimately, if inflation remains above the 4 per cent mark for a sizeable period, the RBI’s hand may be forced as it has to explain to the Union Government why it could not maintain the inflation target it had been mandated by a 2015 framework agreement.

What complicates matters further for the RBI is that inflation expectations of households—their expectations of price increases in three months to a year ahead—are rising since January this year. The RBI releases its Household Inflation Expectations Survey every two months. The latest edition of the survey, released in April (the data was gathered in late February and early March) shows this clearly.

The government can restart the grain distribution programme for the poor. The danger of the pandemic spreading would recede if this policy were to be adopted

All this suggests a logjam: businesses will not borrow and consumers will not spend. But this need not be so. There are plenty of steps the Government can take. For starters, it can continue with regulatory forbearance for some more time, say three to six more months. Then, it can restart the grain distribution programme as it sits on a mountain of food stocks—and nothing will be lost if wheat and rice are given for free. In normal times, there is indeed an economic loss in doing so but in a pandemic, it gets two birds with one stone. For one, it helps that segment of the population that needs to work to eat in the safety of its home. The danger of the pandemic spreading in more waves would recede if this policy were to be adopted. The economic gains from the pandemic being limited are huge.

More can be done. The scope and scale of MGNREGA can be expanded by throwing more money at the programme. This can help rural India, which—unlike the first wave last year—has seen a much higher spike in the number of cases this year. Helping the sector can go some distance in helping the rural economy that has remained a pillar of economic strength in the last one year. Finally, state governments should be allowed to spend more even if it breaches the Fiscal Responsibility and Budget Management (FRBM) levels for some time. This will be much better than the Union Government directly undertaking expenditures as state governments will know how best to tailor higher expenditures to local circumstances. Sitharaman’s comments in the wake of the GST Council’s meeting last week indicated that even with all the political friction in the Council, states are likely to get the help they need.

All these steps should be towards one end: ensuring that future expectations about the Indian economy among people don’t turn negative. This “anchoring of expectations” is probably the most important economic change necessary if spending is to pick up. Consumption demand—which witnessed a 9 per cent contraction in FY21 as the CSO data shows—is probably the most important ingredient of demand right now. But as data from the RBI’s Consumer Confidence Survey, released in early April shows, the mood among consumers is gloomy. Lifting consumer spirits is probably the single-most important economic change the Government should focus on. The best way to do this, apart from all the economic policy steps it can take, is for the Government to speed up the pace of vaccination. The sooner a large fraction of Indians gets inoculated, the better it will be for them in every way.