Rafael Nadal: Return of the King 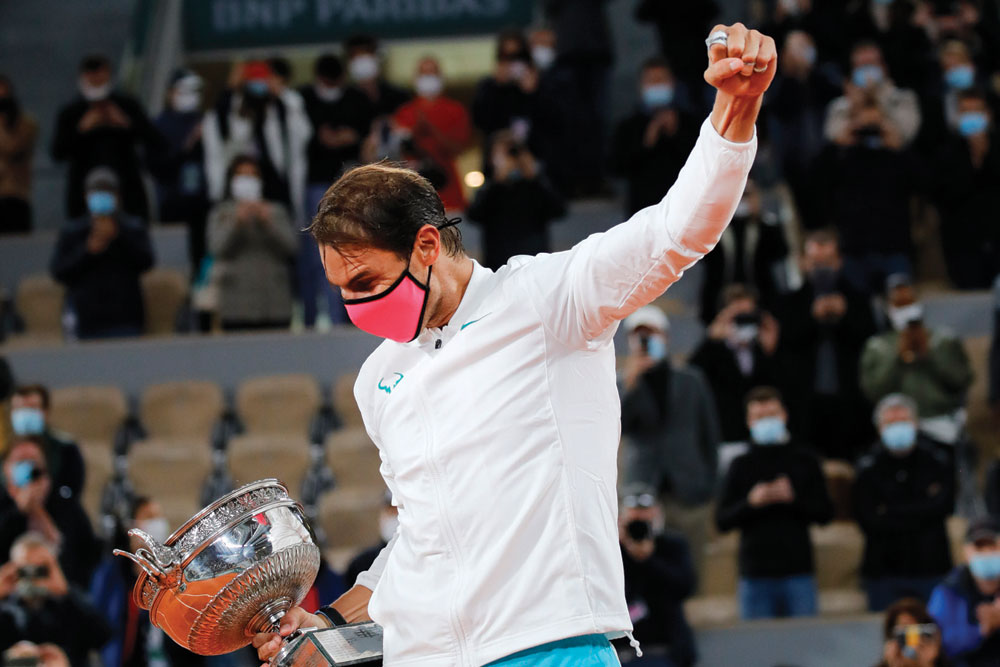 
IN A WORLD that has changed so rapidly in a matter of months, if there is one major takeaway from the French Open final that took place, it is this—we can return to that older world. And for this, we have Rafael Nadal to thank. The familiar visual of Nadal taking his trademark bite off the trophy, even though masked, behind him the distinctive red clay of Roland Garros. A champion reclaiming his old kingdom. A salve to a collective wound. It is a sight we all needed more than we think.

There was quite a bit that made us doubt if Nadal could achieve this. We are all familiar with the old argument—that his game was too physical to last. Was it now, at the age of 34, the world enmeshed in a crisis, it would finally begin to show? At the Rome Masters last month, his first tournament after the pandemic, Nadal was thrashed by an un-fancied Diego Schwartzman. All through that tournament, and even this, it often looked like Nadal was simply trying to establish some sort of a rhythm, some way to get his old game back. At the semi-final, he did beat Schwartzman, but he looked exhausted. At the final, across the court, was a familiar rival in the form of his life, undefeated all season (even though the strangeness of this year has taken its toll on Novak Djokovic, if not on court then at least his mental space).

History awaited Nadal at the Roland Garros. But history also has a way of waiting in the corners to spring a surprise and roll down its curtains.

Had there been a loss here at his old stomping ground, the story could so easily have been different. Instead of these paeans, we would all have been compelled to compose an epitaph to Nadal’s career.

But Nadal didn’t just win. He demolished Djokovic near-perfectly. Nadal’s style is very often built on wearing his opponents out. He often engages them in long rallies, as much tiring them as preying on their psyches, before unleashing his winners. But on that day, Nadal was aggressive from the get go. Djokovic very often had the face of a man who didn’t know what had hit him. When he finally gained some ground in the second set, Djokovic let a scream out in relief. It wasn’t because Djokovic was bad. But because Nadal was just that good.

Nadal will probably rate this as his greatest French Open win. In a season unlike any other, at a final where he was almost an underdog, he thrashed an opponent who has had the better of him in recent times with startling ease.

Nadal’s achievement at the French Open is staggering. Thirteen titles in 15 years. His 100-2 win-loss record here sounds otherworldly. But there is also another twist to this tale. Nadal now ties his long-time rival Roger Federer at 20 major titles, and shares without question, the legacy of the greatest male player of all time. And Djokovic, the third spoke in this wheel, isn’t far behind either. The three greatest male players to have ever lived are in a three-way shootout to determine who will eventually land more titles and perhaps own the title of GOAT (greatest of all time).

This Nadal win, this new twist in the tale, leaves this debate at a tantalising moment. Federer will no doubt be itching to reclaim his position. This current time, where he’s taken a break to regain full fitness, looks eerily similar to the break he took in 2016. Many thought his career was over then. He had gone years without winning a major title. But he came back in roaring form the next year, winning the 2017 Australian Open and Wimbledon, and successfully defending the former title in 2018. Could a similar fate be awaiting the master, already pushing 40, next year? A cynic would write this off as a fantasy. But with Federer, who can say? Djokovic, the youngest and clearly the best all-around performer at the majors, will probably consider this French Open loss as a blip. And with this win, Nadal has just shown that for all the unpredictability of the world right now, he’s far from done.