Priya Darshini: The Pulse of the Periphery

Indian singer Priya Darshini, based in New York, is a Grammy nominee for her live album, with each song recorded in a single take 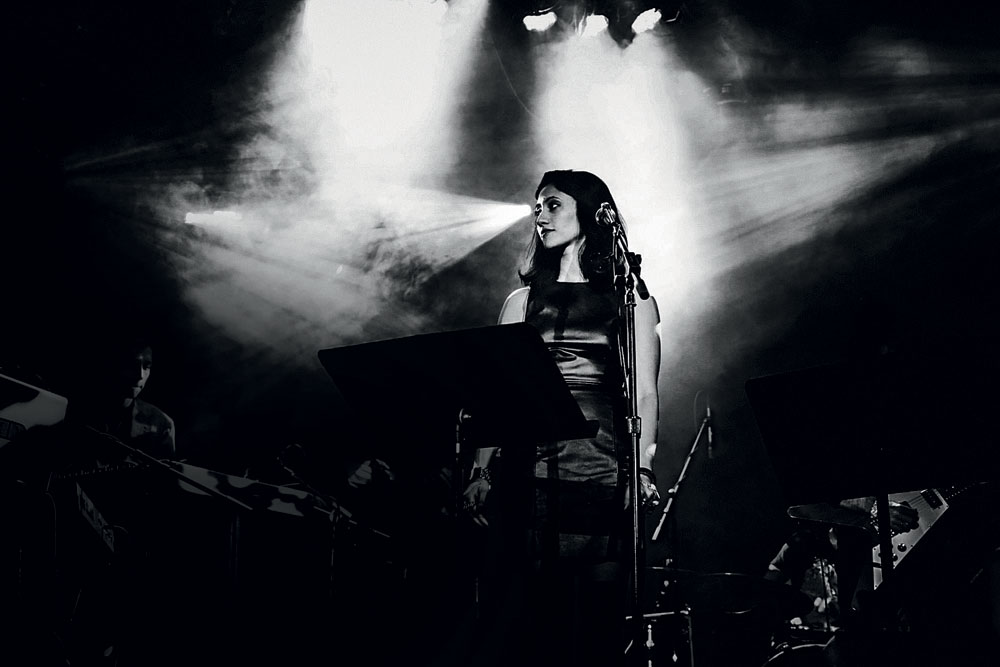 
WHEN SHE WAS informed that her debut album Periphery had been nominated for the Best New Age Album Grammy Award 2020, singer-songwriter Priya Darshini was a little surprised. Here is an album by an Indian artist living in New York, that negates the norm of tech-driven music that many popular artists are known for. Every song on it has been recorded live, on just one microphone, and it involves no compression or EQ (equaliser). It was recorded with four musicians and one vocalist, in one go, inside an abandoned church in Brooklyn, with minimal instrumentation. It stands out for its bold and authentic approach towards creating songs.

“This is quite a shock that a live album was nominated, and that itself is fascinating. Chesky Records, which have produced the album, have been pioneers in recording technology, and the whole intention for them is to capture the sound in a three-dimensional space where you’re not just recording, but you’re also interacting with the architecture of the space as well. So it’s actually a collaboration between the musicians, the architecture of the church we did this in, as well as the recording tech. Each song is in one take, top to bottom, there’s zero post production, keeping the feel of the music completely natural. What’s even more beautiful for me is that in this process you also keep the human errors. The human element, which is very beautiful and again daunting, because you have to be there in that moment with full authenticity and vulnerability and each musician has to be in sync,” says Priya Darshini speaking from her apartment in New York where she’s been inundated with congratulatory calls and messages over the last few days.

As a young Tamilian girl growing up with songs of MS Subbulakshmi and the smell of camphor in her home in Mumbai, Priya Darshini’s musical roots were defined from the beginning. She comes from a family of classical singers and dancers and her sister and she were immersed in that environment from their formative years. Her grandmother—who she is named after—was known in her time for being a rare Bharatanatyam dancer who would sing her own songs too. However, restless to find her own voice, Priya Darshini was attracted to all kinds of music—from Ella Fitzgerald and Miles Davis to Björk to Jimi Hendrix to Ustad Amir Khan. “My grandmother quit music and dance at 18 when she got married, but even what she achieved in that little time was so inspiring. I had no such boundaries growing up as long as I was dedicated to my craft. As I started discovering my own voice, I knew my path was different. In Mumbai, at one point, I was recording voice overs, doing jingles, doing Bollywood songs and all of that, but there was something about the whole process I wasn’t enjoying. I didn’t feel safe or comfortable in that environment. I felt like I wasn’t being heard, and intuitively I knew that this isn’t where I belong. I remember I was supposed to sign on a big music deal in Mumbai and I got a call from Roy Wooten (best known by his stage name Future Man) saying they wanted to tour with me. He started talking about Vedic math and how to bring it into improvisation, and this instrument he’s invented called the Royale and I was like ‘Yes’. There was no money in it, but I said I will do it. Something told me intuitively that this will lead me to a place where my learning would happen,” she adds.

For a girl who was once told that she may never be able to sing again, Priya Darshini has clearly come a long way. “I moved to New York for film studies and vocal therapy because I had vocal nodules that disrupted my voice completely,” she says. In a bid to recover her voice, she moved out of home at 20, and almost became a globe-trotting artist. She studied film in New York, even worked as an assistant in Mira Nair’s The Namesake and also lived in London for a while. While these experiences widened her experiences, she also missed home. Her song Home, and in fact the entire album, is dedicated to this feeling. “The whole album was an exploration of what home means to people. To feel like you’re in the periphery of everything. I know so many people out here who feel that way. And, of course, living in this country in the last four years, this whole anti-immigrant rhetoric, it was very in your face. Also in India, and across the world, the polarisation that’s so rampant, where people were torn away from their own homes. Is home a construct, communities and people, is it a feeling, what is it? And it all boiled down to me finding stillness within myself, and embracing myself with all of my weirdness. For me that’s where the sense of home comes from.” she says.


During the recording I felt bare, emptied out with no walls. I was functioning from that place, says Priya Darshini

For her, her music is a direct reflection of the times she lives in. “As an artist I feel the only thing we are here to do is to reflect the social aspect of that space and time we live in. When you travel, over the years, or decades, the only thing that connects you back to a time is the art that was made during the time. The emotional aspect of the time is seen through the art. You see the paintings, the music, the cinema, the intuitive parts of what people were feeling then through all of these. Like how people are processing this pandemic the world is facing, we will learn that through the art that is being created right now. That’s why artists are important because we document time in a way history or books can’t,” she says.

AS AN INDIAN girl who is trying to make her space within a world full of people with multiple cultural identities, her journey wasn’t devoid of discrimination. However, for her, the music blurs those boundaries too. “For me it was important to put out there that so many different cultural identities can actually co-exist in a beautiful way, in a space that’s authentic, natural, and that can have a unique voice. And that’s the voice and that’s the intent of my music. I’ve collaborated with multiple musicians from all across the world all my life, and even with this album. This one required me to be completely vulnerable in front of these artists who were nothing like me. But that’s the beauty of it. During the recording I felt completely bare, emptied out with no walls. I was functioning from that place and my intention was for people to hear that part of me,” she says.

Priya Darshini isn’t only a musician. She is also an actor, a composer, a state-level swimming champion and was the first Indian woman to complete the rigorous 100 mile Himalayan Ultra Marathon. The Grammy Awards may be held as an online ceremony, but as an independent musician she hopes this paves the path for many more like her. “The awards are there to give you recognition for the work, but it isn’t a commentary on your artistry, or if your work is better than everything else that exists. Because I promise you, there are so many other artists that exist who we haven’t heard who probably deserve a Grammy or an Oscar. It’s just that we don’t know about them. For me, this recognition is for my parents, and all those artists finding their voice in
the world.”