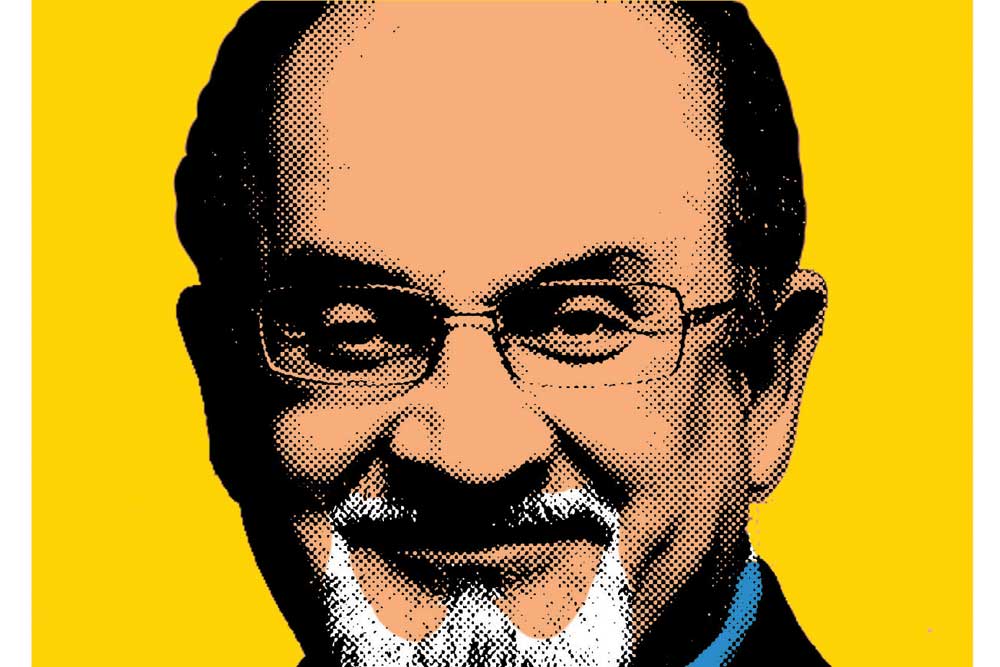 Salman Rushdie, who is now recovering from a murder attempt on him in New York by a Lebanese-origin 24-year-old probable religious zealot, has been a larger-than-life figure ever since most of us have heard his name. Much early in his literary career, he acquired a halo and a celebrity status for all the right and wrong reasons. Which is why it feels like a bit of an honour that he considers you and returns your attention when you meet him. Being a reader of his works isn’t enough; you have to meet him to know the man enough. While there are writers and artists who lead you to feel that perhaps it is better to respect an artist’s work than to know the person behind it, 0ne feels delight as opposed to disappointment after meeting Rushie. Both reading as well as meeting him makes sense. It isn’t easy to see one detached from the other, the work and the writer. They seem inseparable.

Rushdie is sharp, funny, amiable, full of life and curious to know more, and therefore he listens, although it is not wrong to assume that he likes to hear his own voice. Who wouldn’t, with that kind of command over words as a conversationalist? It comes as no surprise that he has been ready to risk anything, even life, in return for the freedom to write, communicate and, of course, offend. You cannot not like the writer seated in front of you talking incessantly as you shoot questions at him. He talks as though he values each dangerous moment he has lived for decades under the weight of a fatwa of a religious head who was determined to revive the order of the Islam he represented: Shiism.

When I waited for my turn to meet Rushdie at the reception of a luxury hotel in Delhi in the cold winter of January 2013, I thought of Ayatollah Khomeini who issued the fatwa in February 1989 against the writer, offering a reward for anyone who could kill Rushdie for having blasphemed against Prophet Muhammed in his novel, The Satanic Verses, which, ironically, was banned in India even before the edict was issued. The great scholar Said Amir Arjomand has often reminded us, especially in his stunning work, The Turban for the Crown, how the man who came to power in Iran at age 77 after years in exile in Iraq and later France – through what was called the Islamic Revolution of 1979 – transformed his country and Shiism in multiple ways, and it is anybody’s guess that he wanted to set an example of the Shiite assertion. It is possible that – in that sense – Rushdie ended up being an unsuspecting victim. Arjomand had written as early as 1988 how in Iran people around Khomeini and himself had used Islam, which he describes as a vigorous religion, “with the ideological armour necessary for battle in the arena of mass politics”.

This is not to say Rushdie wasn’t aware of what lay in store for him after he wrote The Satanic Verses. I did ask that question when I finally met him having been relocated from one room to another before Rushdie finally walked in to meet, so elaborate was the security arrangement in Delhi back then.

But my point of reference was an interview by Tariq Ali of the late public intellectual Edward Said who was between chemotherapy sessions at his New York home, almost a decade before the late University Professor of English and Comparative Literature at Columbia University, crusader for the Palestine cause and author of Orientalism lost his battle with cancer. I brought it up because I had heard that Rushdie and Said (who passed away in 2003) had been friends and admirers, among other writers, of Joseph Conrad. I had read of a discussion Rushdie had anchored in which the guest of honour was Said. But my bringing it up was a mistake: just as Rushdie was enamoured of Said, he disapproved of Tariq Ali’s journalism. Although there wasn’t anything he would have found objectionable about the interview, he went on to warn me of relying on “Tariq Ali and company”. It was an uncomfortable moment for me. Suddenly, Rushdie stopped eating biscuits served for him at the hotel – he had been eating a lot of them, repeating they were “very good”. He paused for a moment and then filmmaker Deepa Mehta murmured something to him. They were in town to promote the movie version of his ‘Booker of Bookers’ multi-award-winning novel Midnight’s Children. At that time, both said that Rushdie was going to play an Indian-origin thug in Mehta’s untitled movie on Canada’s Punjabi gangsters. He also talked about being in discussions with filmmakers to launch a movie version of his memoir about his life underground after he heard of the death sentence by Khomeini on Valentine’s Day in 1989. The book had hit the stands in India perhaps only a few months prior to his visit: it was titled Joseph Anton, an alias he chose for himself from the “combination” of two writers he had loved: Joseph Conrad and Anton Chekhov.

Rushdie was not ready to give up on a question that Ali seems to have asked his late friend Said about Rushdie. My bringing it up appeared to ruffle him. But he soon calmed down and said in that interview I had done at the time for The Economic Times, “Tariq is a very unreliable reporter. Let me just say that. Tariq Ali and company, you must treat (them) with great caution. Edward and I did discuss the book. And I asked him to read it long before it came out. And I asked him what he thought about it. As I recall what he said was that the Mullahs are not going to like it. And I said that they never liked anything else I wrote. And he said, ‘Well that is right. It is not a reason for not doing it’.”

He went on to add, “Tariq is a trouble-maker. I haven’t read the interview you talk about but Edward was a great supporter of the book. Actually, even after it (The Satanic Verses) came out, he did something more courageous than many people did: which is to speak in defence of it in Muslim countries on lecture tours,” Rushdie told me sternly. He then mellowed down and went on to talk politics, Satyajit Ray (he considers it a lucky event to have met him), literary critics, global and Indian politics, Rahul Gandhi, Narendra Modi and so on.

After having discussed a bit about Islam and its ideas on politics and lack of distinction between church and state, I raised a mischievous question, having realised that he was again happy talking to me, with a particular affection of sorts for Kerala, a place he had travelled and mentioned in Midnight’s Children, including the ascent of our first chief minister EMS Namboodiripad to international fame in 1957 as head of a communist government through ballot.

Does the expression, “the Hindu terrorist”, surprise him? I asked him. He laughed and said, “Nothing surprises me anymore. I have seen a lot in my life.”

That statement lingered in the air: Nothing surprises me anymore. He had said it while handing me an excessively sweet biscuit with a velvet touch of his hand. “You can eat,” he said, in a tacit approval that at my age almost 10 years ago it was quite harmless. He probably also didn’t want to be the only man in the room gorging on rich, tasty biscuits.

He wanted to know the meaning of my name and when I explained to him that it was picked up from a figure of speech in Malayalam, my mother tongue, he appeared pleased. At that very moment, I asked him about the perception that he was a bit condescending of writing in Indian regional languages in English novels. He promptly said it was important for him to set the record straight because his opinions had given rise to a lot of confusion and misinterpretation: “People sometimes don’t read carefully. What I had said was that in the half century after Independence, the most interesting development was the development of Indian writing in English, something that was barely there before. The most important literary phenomenon (in the post-Independence period) is the rise of Indian writing in English. That is an obvious fact,” he said to me in that interview.

Now, to set the record straight on Tariq Ali and his question to Rushdie’s favourite Said, the question was: Given your constant theme of the links between politics and culture, what was your reaction to the ‘Satanic Verses’ affair?

Said answered: “Well, from the very beginning, I was intrigued by the turn that Salman took, both technically and spiritually, in that novel. I remember seeing him at the time he was writing it. In fact, he showed me the manuscript and said to me that he was going to shock a lot of Muslims. So, I knew that it had a kind of power and provocation in it that was deliberate.

I was, to be honest with you, totally astounded and flabbergasted by the reaction, both the Islamic in England reaction and the Iranian reaction. I thought they were disproportionate and, in many ways, outrageous. There were so many outrages perpetrated on the Islamic tradition prior to this, by outsiders, our culture has been misrepresented, and vilified and systematically degraded, our people had been treated politically in the worst possible ways, that to make a case out of a brilliant novel, written by one of our own, and to cause it to become the occasion of a fatwa enjoining death on a writer, I thought, was really a sign of how low the Islamic world had sunk in its current state. I immediately rallied to his side….” (Conversations with Edward Said by Tariq Ali; Seagull Books, 2006)

When I said goodbye and was about to leave, he came forward to hug me, at which moment, I asked him to autograph several of his books I had carried with me in a bag. It included Grimus, The Jaguar Smile (he said he had not seen the book in a long while), Midnight’s Children, Joseph Anton, The Enchantress of Florence and a copy of The Satanic Verses for my friend and colleague at several organisations, Siddharth Singh. He signed all of them, addressing us by names.

That was an evocative moment.

What rings in my mind still is his profound statement: “Nothing surprises me anymore. I have seen a lot in my life.” The pronouncement gets a new meaning especially when he says it.

I feel it may not have surprised him much when the 24-year-old darted aggressively towards him flaunting a knife on that evening in New York with the intention of killing him in cold blood. He may have foreseen such attacks by groups or loners full of contempt and hate many times in his life filled with dramatic twists and turns.

In recent reports from the New York hospital where the author is under treatment, Rushdie’s son, according to reports, has said that his father, who suffered multiple stab wounds, still retains his perennial sense of humour despite being in pain.

Thanks to his power of words and fortitude in life, it is, in fact, Rushdie who continues to surprise us, much to the despair of the dark forces who want to see him gone.