Mumbai’s Transport Makeover Gets a Kickstart

By the end of this year, an underground line covering most of the main city is expected to be operational 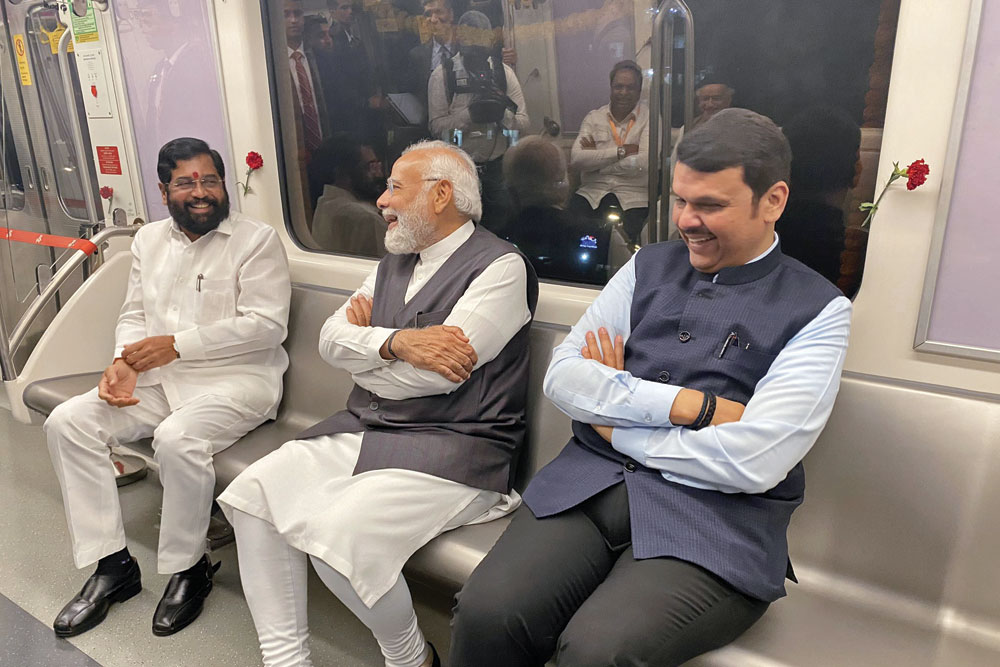 
A BRAND NEW PARTY taking power is usually good for transport within Mumbai. It was after the Shiv Sena-Bharatiya Janata Party (BJP) alliance first came to power in 1995, following decades of Congress rule, that a slew of flyovers was built that changed the landscape of commuting. But then, in the energies of the post-liberalisation era, as both population and prosper­ity grew, which meant more cars, slowly, commuting times began to inch ahead until going from one end to the other again became many hours. In 2014, when Devendra Fadnavis was first sworn in as chief minister in a BJP-led government with the Sena as a junior partner now, he again revived the focus on transport. His promise to the people of Mumbai was that, with all the projects his government had planned, travel time between any two points would be less than one hour. The biggest element in this would be the Metro railway network. In 2018, The Hindu newspaper would quote him saying: “We are creating a dense Metro network across the region, which will provide circular movement for all citi­zens. I am sure once all the Metro networks are operational, a person will be able to travel between two places in MMR within an hour.”

It remains surprising that the richest city in India would be so late in having a Metro. Delhi had one already by the mid-2000s, and that should have at least given some impetus. Instead, what Mumbai got was a single line that opened in 2014, connecting two ends of a suburb called Andheri. It was a hub for offices but one line in one suburb hardly made any dif­ference. The Fadnavis government had ambitious targets to execute and improve on the city’s master plan that had been in existence. Work on the Metro would begin in 2015, the year after he came to power, and he publicly stated the deadline for when most of it would be completed—before the next As­sembly election of 2019. An Indian Express article from 2015 quoted Fadnavis: “‘As per the existing plan, Metro corridors in the works will be completed by 2021. But my life is only till 2019. I need oxygen by 2019 itself. So, we have approached DMRC (Delhi Metro Rail Corporation) as it has expertise in Metro construction to help us plan and execute a Metro net­work that covers the entire city in five years,’ chief minister Devendra Fadnavis said at a real estate conclave organised by Loksatta, the Marathi language daily of the Express Group.”

It began strong. Those who commuted on the highways saw massive pillars come up at lightning speed and there was constant work happening across the city. In the southern parts, where the line was going to be underground, massive holes were dug for stations and tunnels to come up. Slivers of the highway, where the line was going to be overground, were sectioned off. It was rumoured that Fadnavis was taking daily stock of the progress and that he also made surprise visits to see it himself. Even though his target of 2019 looked difficult, the work progressed. And then politics came along and upended it all. The Shiv Sena broke off to form their own government after the Assembly poll that year and the then Chief Minister Uddhav Thackeray who had opposed a critical car shed that was to come up in Aarey Milk Colony, decided to relocate it to another part of the city. That never happened. Then Covid struck and there was the lockdown. As a result, of the entire planned network of 14 lines, the only one built in 2014, remained operational. Last April, Thackeray inaugurated two little stretches, but it was just a face-saving measure to show some achieve­ment. It only connected a handful of stations at the farthest end of the suburbs, connecting no office hubs, and ran empty.

On January 19, what was for­mally launched were two full lines of the network, Metro 2A and 7, which does make a difference because it is one of the busiest corridors for traffic. It is the reason why Prime Minister Narendra Modi himself chose to be present for the inauguration. As he said in his speech: “Till 2014, there used to be only 10 to 11 kilometres of Metro. As soon as you made the double-engine government [of BJP and Eknath Shinde’s Balasahebanchi Shiv Sena], its progress quickened. We are going with speed towards a network of 300 kilometres of Metro.”

By the end of this year, an underground line covering most of the main city is expected to be operational. More lines have different deadlines going all the way up to 2026. But transport should see an immediate improve­ment because even the ones launched now will reduce the load on the suburban local trains, the main avenue for commuting in the city.

There are also mega road projects on the anvil. In Novem­ber this year, a trans harbour sea link between Mumbai and its satellite city Navi Mumbai will cut travelling time from over two hours to under 20 minutes. It is touted to be the longest sea bridge in India. Some even claim that with such a road connection, Mumbai’s geography itself will be rewrit­ten. Speaking to Times Now, Mumbai Metropolitan Region Development Authority Commissioner SVR Srinivas, had said: “By the commissioning of the MTHL, Mumbai will no longer be an island city as it will not have the constraints of an island city it was suffering for the last two centuries. The geographical constraints will be thing of the past once the MTHL is commissioned because, in 10 minutes, you are go­ing to reach the mainland.”

There is also one more project, the coastal road, which in its first phase will connect the business district of Nariman Point to the suburb of Bandra and the sea link there. It also has an estimated date towards the end of this year. And then there will be a second phase of the project. The Indian Express reported: “The Phase 2 of the coastal road project, to be known as Versova-Dahisar Link Road (VDLR), will originate from Versova and extend till the starting point of the Dahisar- Bhayander Link Road, in Dahisar. As per the BMC blueprint, the 24.29-km stretch has been divided into four packages. Estimated to cost `9,980 crore, BMC is eyeing a five-year deadline for Phase 2.”

Given the scale of transport projects set to be completed before the end of 2023, you would normally take these promises with a pinch of salt. But one factor makes it more than likely for the deadlines to be taken seriously, and that is the General Election next year. Maharashtra is crucial to the BJP’s calculations, and huge projects that impact lives are a giant advertisement for the party’s commitment to development. Mumbai, which has for decades been living with pathetic commuting conditions, won’t be complaining.