Lyari, Karachi’s football hub, has a message for clerics, politicos 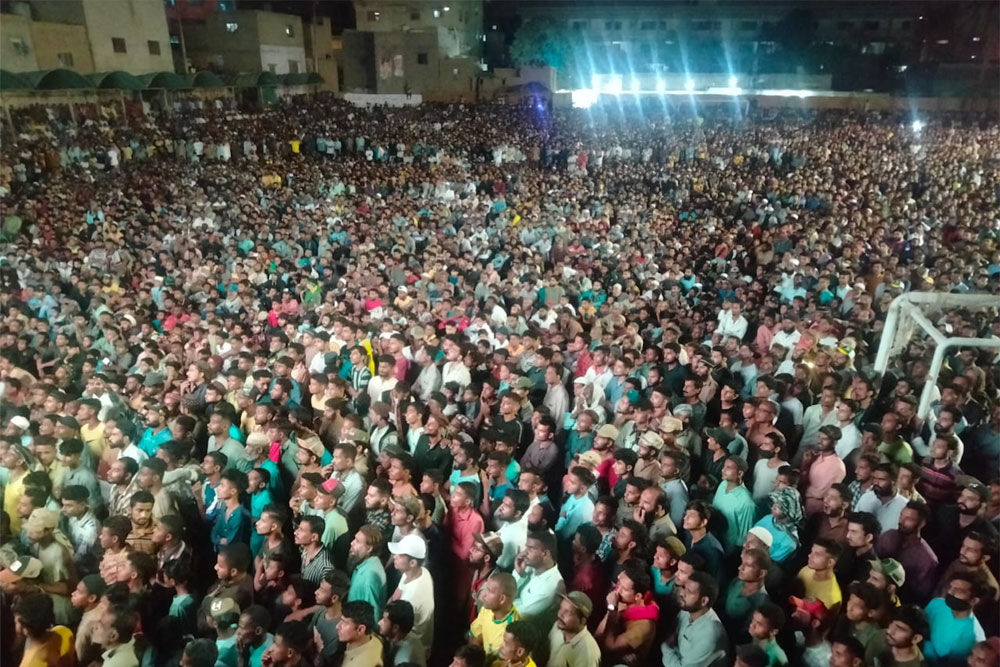 A scene from Lyari


Lyari, a working-class settlement in Karachi, is a hub for football and clubs in an otherwise cricket-crazy Pakistan. Most residents are Brazil and Argentina fans, but recent upsets have not dulled their football frenzy one bit, and the neighbourhoods in the area continue to erupt regardless of whoever wins and enters the next round of FIFA World Cup 2022. Videos doing the rounds from Lyari are confirmation that the densely populated region within the commercial capital of India’s neighbour can rival Sao Paulo, Casablanca, Buenos Aires, and Zagreb in football revelry.

Sameer Mandhro, a Karachi-based journalist-friend who was born in Lyari generously offered this writer a guided video tour of its packed Usman Park and Kalri Ground, where young and old congregate in their thousands to watch World Cup games. They were dejected on the day Brazil were sent home by Croatia on December 9. But the people that I managed to speak through WhatsApp video thanks to Mandhro, a seasoned writer with the Express Tribune, hastened to add that although Brazil are their favourites, they love the game more and therefore whoever wins earns their respect and applause.

Lyari is home to several football clubs and training centres. It is often said that you run into a new club at every corner of this highly populated urban settlement. Kasheb Shaikh, 18, who spoke to this author from Lyari’s Kalri Ground, said that although he has a day job, he trains youth aged six to 18. Shaikh says he has been a player and he does this for free “to ensure that kids in Lyari get an opportunity to come up in life through their football skills”.

So far football has not helped young generations become socially mobile, but Shaikh hopes it soon does. Nida Kirmani, a Lahore-based academic who has done studies on Lyari’s social mobility and urban conflicts, also concedes that so far football has provided the people of Lyari with entertainment and joy. “However, it does not offer opportunities for upward mobility or jobs unfortunately,” she says. A feminist who works on gender urban marginality in South Asia, besides being a member of faculty at the Lahore University of Management Sciences, Kirmani notes that Lyari, in the past, was home to labourers who worked at Karachi’s port. “After the mechanisation of the port and an influx of migrants from across Pakistan, Lyari’s economic profile has become more precarious. It has a high rate of under- and unemployment. However, it also has a significant middle-class population although many members of the upper-middle class have migrated gradually over the past years. It is also home to many new lower-class and lower-middle-class migrants to the city,” she explains.

Saleth Mohammed, who runs a football club in Lyari, told Open that he is grateful to the ruling politicians for erecting large LCD screens in Usman Park and Kalri Ground for public viewing of World Cup matches. Politicians join the ecstatic crowds in Lyari to watch these matches. Recently, Syed Murad Ali Shah, current Chief Minister of Sindh, himself turned up to watch the quarterfinals in Usman Park. The LCD screens on these grounds are 40 to 50 ft long and 15 ft wide, says Mandhro, signalling towards the huge screen from among the crowds.

Mandhro, who has spent many years in Lyari and has family there, adds, “Football is a passion for the residents of Lyari. The game is in their blood. They place flags of different countries on their rooftops and keep their favourite players’ photos in their homes. They also try to imitate them when they play.”

Interestingly, football aficionados argue that of all places in the Subcontinent where football is almost a religion – such as in Kerala, northeast India, West Bengal, Dhaka and several other cities and towns in Bangladesh – Lyari is home to the largest number of clubs and players that also see largest crowds in a single vicinity, thanks to its density of population. A video that went viral about Lyari’s heightened football fever this World Cup season said: this is not Rio or Sao Paulo but Lyari in Pakistan, a country which, ironically, comes in the 196th position in FIFA ranking this year.

Kirmani states that previously Lyari was home to various criminal gangs. “These (crime rates) have declined since a paramilitary operation began in 2013, but Lyari still has a very widespread drug problem. In fact, many residents say this has been growing in recent years.” Although she is not sure how the place inherited this footballing culture, she says, “In general football is very popular amongst the Baloch, who make up a large proportion of Lyari’s residents. Football is also popular in other Baloch-dominated localities of Karachi including Malir.”

Mandhro, who makes the effort to walk around Lyari’s football turfs for our video chat, necessitated in part due to harsh visa restrictions between our nation-states, introduces me to Salman Baloch, saying his curly hair identifies him as Balochi among the other communities in Lyari. Baloch is 18 and he says that he is in his last year in school and plays football hoping that he may become a professional soon. Pakistan, like many countries in the Subcontinent, has not done well in the game internationally or even regionally. But then hopes among football buffs are high considering their sizeable population and the opportunities in the future as all these countries mark a steady rise in football viewing.

Kirmani is currently in Boston and is kicked about the prospects of making it to Lyari to watch the finals. Unfortunately, her favourite Brazil will not be playing. But then, as Mandhro says, watching football in Lyari is an out-of-the-world experience.

In Lyari, the love for the beautiful game transcends nationalities and continents. Husain, an elderly gentleman who spoke on video chat while watching the Sports 18 channel in the background, says, “We love football for its purity.” It is not just the football players, even anchors such as Semra Hunter and Anant Tyagi are popular here.

At a time when religious fanatics term football as un-Islamic, Lyari, which houses some of the most religious people in Pakistan besides being perhaps the poorest, has a strong message for their clerics as well as for leaders who could do more for the young football players, both male and female, craving social mobility and opportunities in professional sports.