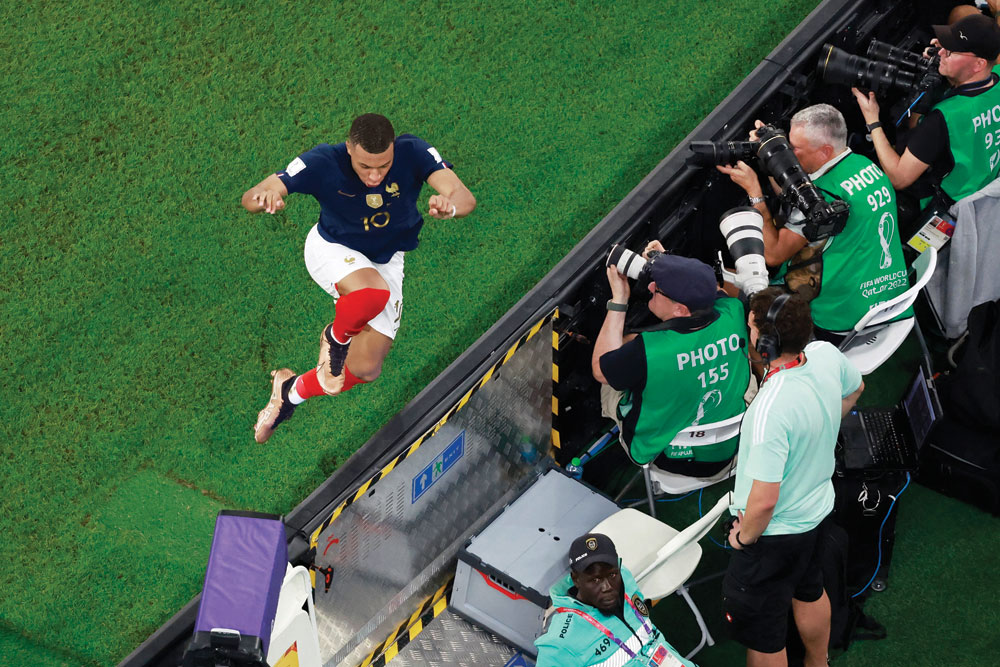 
EXACTLY AN HOUR INTO THE MATCH BETWEEN France and Denmark on November 26, Kylian Mbappé stood relatively still somewhere on the eastern extremities of the Stadium 974 field. This was an anomaly, for Mbappé, France’s phenomenal forward who is seemingly part-wave-part-human, is never still and almost always a blur. But at this moment, the score till 0:0, his legs were as contemplative as the calm winter air in Qatar, possibly wondering who to pass the ball to from his wide vantage on the left flank.

Mbappé scanned the blue shirts among the crowd in the centre of the pitch and missing among his midfielders were fellow World Cup winners Paul Pogba, who has the cunning ability to drill a long pass through a thicket of legs to the forward regions, and N’Golo Kanté, who can simply carry the ball ahead between his magnetic, dribbling feet. Also among the missing-injured from France’s squad for Qatar 2022 was striker Karim Benzema, current Ballon d’Or winner and possibly the best finisher in the game today. So Mbappé simply made up his mind to do it all by himself—create, score, celebrate and elevate.

In one fell swoop, Mbappé released left-back Theo Hernández into the pocket of space by the corner post and cut horizontally across into the Denmark box, pleading for Hernández to return the ball to him. Now Hernández himself was an in-tournament replacement at left-back, replacing of all people his brother Lucas, who tore his ACL during the opening minutes of their tournament and thus became the latest first-team casualty in Les Bleus’ injury-plagued World Cup campaign. But with Mbappé pulling the strings, the younger Hernández was up to it; he toed the ball deep into Danish territory, where it was promptly thumped into the back of the net by the Blue Blur.

For the longest period—right until this Mbappé goal in fact—Denmark were the tactically superior side, playing to near-perfection their strategy of threatening to bore France into submission. The Danes had sat back, parked the proverbial bus, and easily absorbed the odd strands of pressure created by Mbappé (who else?) and to a certain extent a visibly tired Antoine Griezmann Then, when it was Denmark’s turn to attack on the counter, they passed the ball back among their defenders and parked the bus all over again, challenging France to make something out of nothing.

It would have worked if Mbappé hadn’t broken the deadlock and all but put France in the Round of 16. But because nothing in this title-defence seems to flow smoothly like their World Cup win in Russia, Denmark equalised; of course they did, given Didier Deschamps’ side had now conceded in seven out of their last eight games, including to Australia in their World Cup opener—the Socceroos in fact went ahead after nine minutes, only to be reeled in by four French goals, including one by Mbappé.

So, Mbappé would have to once again turn saviour, this time in the very dregs of their second game in the 87th minute. In came a Griezmann cross, which Mbappé literally carried into the Denmark goal on his person, controlled by twisting his hip this way and that. The goal made him leap over the hoardings and dart towards a happy gang of photographers, who flashed their flashes as a true No 10 crossed his arms and smiled an all-knowing smile. A star had grown.


By starting this World Cup in Qatar just like the way he had finished the previous one in Russia, as the tournament’s unambiguous superhero (he already has three goals after two games—one less than his tally at the 2018 edition), Mbappé not only made France the first team through to the knockout stage but also, significantly, the first defending champions in a long while to not fall at the group stage. The curse was real—Italy in 2010, Spain in 2014 and Germany in 2018, and France in 2002 before them. So, even if it wasn’t a foregone conclusion that France would suffer the same fate in 2022, Deschamps couldn’t help but feel the title-defence voodoo cast upon him when an entire regiment of his best players fell by the wayside before (and even after) the 26-man Cup squad was named.

But Mbappé’s presence has surely helped calm some of those nerves, enough for the usually stoic Deschamps to say: “The World Cup, it is his competition, he knows how to make a difference.” The difference between not only wins and losses or progressions and exits but, most importantly, a tipping difference between Fabulous France and Flawed France. And Deschamps knows it. “Kylian, what can I say, he has the ability to make the difference in games and opponents have to rethink their structure when coming up against him,” said the man who was captain when France won their first World Cup and coach when they won their second. “He has always been able to play as part of a team even though he is an individual, flair player. So that is great for us.”

It truly is. For, in a group stage littered with slain goliaths (Argentina losing to Saudi Arabia, Japan defeating Germany, Wales falling to Iran, and Morocco beating Belgium all stand out), Mbappé has steered France towards safer shores, time and again. Perhaps this stems from the fact that opposition teams have struggled to shackle him with a strategy because, put quite simply, when Mbappé wants to go on a run—with or without the ball at his feet—it is rather impossible to stop him. And those breathtaking bursts may just be his finest quality.

When the afterburners come on, man-marking him is futile. Just ask Germany’s World Cup winner and defender, Mats Hummels, who had the unenviable task of being on Mbappé during their clash at the European Championship in Munich last year. So fast and terrific does Mbappé tend to get on the left flank that in matches against France and Paris Saint-Germain, the opposition’s right-back, in this case Matthias Ginter, almost always needs full-time assistance from his centre-back, Hummels on this night.

All of Munich could have been on Mbappé when Pogba booted the ball into the emptiness of the German half from a crowded French one, and they still wouldn’t have stopped him. That kick forced Hummels, much closer to the rolling ball, and Mbappé, much farther from Hummels, to chase the ball simultaneously. Despite being a good 15 metres behind Hummels, Mbappé switched on his jetpack (somewhere by the halfline) and was soon neck-and-neck with the disbelieving defender. This, despite not running as the crow flies and having been forced to take a wide angle around the German. Then came the hard break to the right, cutting well into the defender’s lane as Mbappé pulled ahead, ball now at his feet and bursting towards Manuel Neuer in Germany’s goal.

Hummels had no option but to stick a leg out and foul the human version of a howl ahead of him, resulting in no goal (this still remains one of the most watched videos from Euro 2020). But often these bursts end up with the ball at the back of the net, like it did against Australia in France’s opening game in Qatar. Lurking on the edge of his wing, the left, Mbappé received the ball from his midfield. France were already 3:1 up and this was late in the second half, but neither the scoreline nor his own fatigue was going to stop Mbappé from scything through the grass at terrific pace. En route, he roared past both right-back Nathaniel Atkinson and winger Mathew Leckie, and yet somehow, even at that speed, controlled his cross with ease at Olivier Giroud, whose head did the rest.

That goal, incidentally, was Giroud’s 51st for his country, tying him with the great Thierry Henry for France’s all-time scoring record. Mbappé, a good 13 years younger than Giroud, already has 31 goals for his nation—tied with his childhood hero and a man who did just as much justice to France’s No 10 shirt, Zinedine Zidane. What then becomes tricky is to fathom just how far Mbappé will stretch France’s goal record by the time he is done, some 15 years from now. This was perhaps what Deschamps was alluding to when he said: “I have got a lot of attackers, but Kylian is of course an outstanding one.”

So outstanding, that no other player at this World Cup has what he has in abundance—the singular ability to bend a game to his will. Diego Maradona had it in 1986, Brazil’s Ronaldo had it in 2002, and Kylian Mbappé has it in 2022. But unlike El Diego of Mexico or O Fenômeno of Korea-Japan, the Mbappé of Qatar already owns the invaluable experience of winning a World Cup. When he hoisted that famous statue of gold in the Moscow rain four years ago after scoring in the World Cup final (again, like Maradona and R9), he was just 19. At 23, he is burdened by the dreams of an expectant nation. Nothing less will do.