Is It Kerala in Present Continuous?

The leadership of E Sreedharan has boosted NDA’s morale 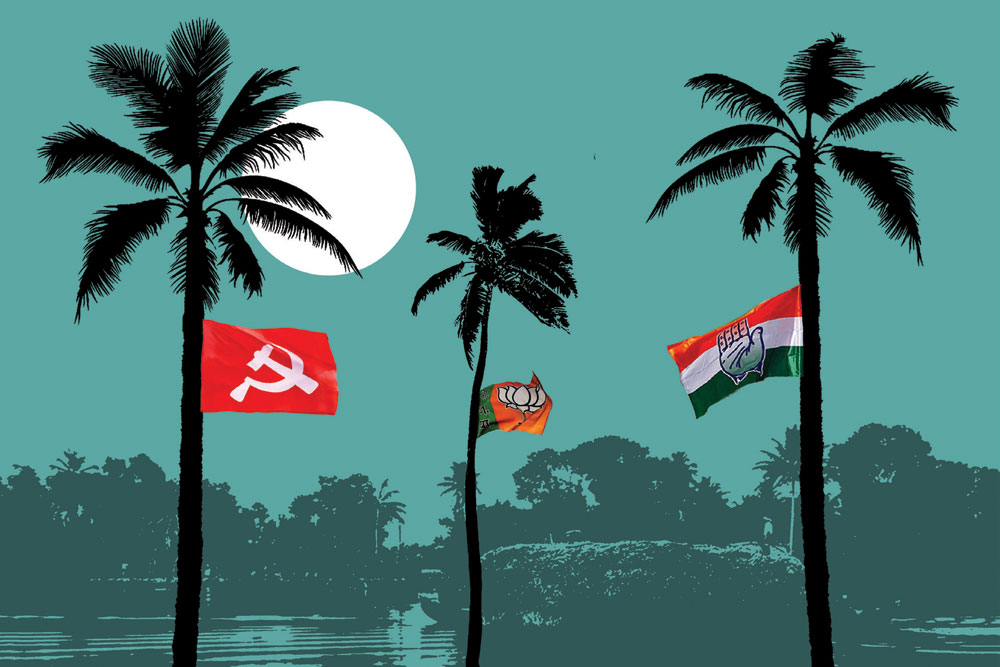 
THE EMERGENCE OF a third coalition, the National Democratic Alliance (NDA), which is likely to increase its vote share in Kerala, is the most significant feature of the election scene in the state this time. But despite the churning the ruling party at the Centre has created, with shifting loyalties and change in fortunes and the arrival of national leaders for campaigning, Kerala has turned inwards to local leaders and issues. Most national issues like pandemic control, nationalism, secularism, farmers’ strike and national security are not under discussion. The development agenda is in focus for the ruling party, and good governance and matters of faith are the promises of the opposition.

Kerala, which prides itself in its global reach and loves its children abroad and flourishes with their remittances, appears to have been afflicted by an acute case of ‘localitis’ when it came to the selection of candidates for the forthcoming elections. Not only Keralites who returned to Kerala after brilliant careers abroad were not welcome but politicians from other districts were dubbed ‘foreigners’ as well. Gone are the days when those who had done well nationally or internationally were invited to contest in Kerala to be elected and sent off to the national scene to occupy important places at the Centre. The celebrated cases of VK Krishna Menon and KR Narayanan come to mind.

But in recent years, perhaps because of the unpleasant experience of some outsiders capturing attention, no political party is known to have invited any star from outside to contest the elections. The feeling is that party members who have suffered police atrocities and prison life should get preference over newcomers, who not only had luxurious lives but also were critical of politics and politicians. The choice was limited to professional politicians on the ground that they did not have other options to gain recognition or power. Popularity may deliver votes but it is the political leadership that chooses candidates. This is in contrast to the trend in Delhi where former bureaucrats are in demand to hold political offices. A former bureaucrat from Kerala was also a minister of state in the Central Government for a while.

This time, two or three achievers abroad were mentioned as possible candidates for state elections, which was unusual. One of them, a brilliant diplomat, who was born in Thiruvananthapuram and had wide contacts among the Kerala politicians during his different assignments in India and abroad, looked like a possible candidate. His credentials as a native, who had returned after serving the nation abroad, appeared unimpeachable. But local politicians in his own city of birth objected and he had to make way for a politician.

The other name was of a UN official, who was very helpful to Kerala at the time of disasters. He has deep roots in Kerala and is a good writer in Malayalam and, because of his closeness with the present leaders in Kerala, was considered a possible minister for disaster management. But he denied that he was ever invited and appeared to be happy to continue in the comfort and luxury of Geneva.

There has also been an exception to this trend, a success story this time of a highly regarded public health professional, who has worked for years in several international organisations, including the World Health Organization. Making use of the facility to work from home, he shifted to Thiruvananthapuram a year ago and prepared the ground to contest from a particular constituency. Although there were many claimants to that seat, he secured it on the ground that he was in student politics in Kerala and was associated with some of the senior leaders of Congress. He is now pitted against two powerful opponents, but if he wins, he will be a welcome addition to the political scene of Kerala.

Kerala has a tradition of bringing the two coalitions to power by turns, reflecting the hope that a change is always for the better. This disproves the theory that Kerala is a politically polarised state. There is obviously a swing group which remembers the evils of the previous government and votes for a change in the fond hope that the other side may deliver better. After five years, they swing again, giving primacy to hope rather than experience. The gradual emergence of a third challenge has raised issues of shifting loyalties and unholy alliances.

This time, the incumbent LDF government is confident that it will continue despite the scandals, corruption charges, allegations of anti-national activities in collusion with a foreign country, which should normally have brought the government down even before it completed its term. It believes that it has been the best dispenser of development and welfare for the poor, and the other factors will pale into insignificance. The campaign slogan of the coalition is ‘return is certain’. Not only that, the latest opinion polls by different agencies and TV channels unanimously indicate that continuity is possible. Unsurprisingly, the ruling coalition bristles with overconfidence, wishing away inconvenient questions about its record of unwise policies on matters of faith, like Sabarimala.

The main opposition coalition, the UDF, of which Congress is the leading partner, is no less confident, as it believes that it is the only viable alternative for Kerala, even though not a day passes without defiance of the state and Central leaderships on the selection of candidates. The principles enunciated to guide the selection of candidates are selectively disregarded. Kerala is the only Congress bastion in the country and so the high command easily succumbs to pressure from the state leaders. The confidence level in the Muslim League, another party in the coalition, appears justified as it is the least divided among the parties.

The confidence of NDA in winning several seats as against one at present is a true mystery as a wave in its favour is not in evidence. The leadership of E Sreedharan has boosted its morale. The most important message that NDA should give is that Kerala should abandon its exceptionalism and join the mainstream to strengthen the Modi Government. The state government in a collision course with the Centre deprives the state of the benefits of the welfare activities which are transforming the country. The undermining by the state of important investigating agencies is a big disservice to the nation’s law and order and security. The Enforcement Directorate and the National Investigation Agency (NIA) are particularly crucial in safeguarding the economy and preventing external intervention. But this message has not been driven home by NDA.

Even though opinion polls are largely in favour of continuity, the opposition expects a miracle, dismissing the polls as manipulation of the media. Even LDF leaders are warning against lethargy on account of favourable survey results. More ‘prominent’ people are expected to move from one coalition to another even after the battlelines are drawn. The news about adjustments and use of money power and ‘payment seats’ have made parties suspect in the eyes of the public. The fight will be ferocious, but the ruling coalition appears to have an upper hand this time.