×
Features | Letter of the Week

On Indian Muslims and Mani Shankar Aiyar’s review of Ghazala Wahab's book Born a Muslim: Some Truths About Islam in India 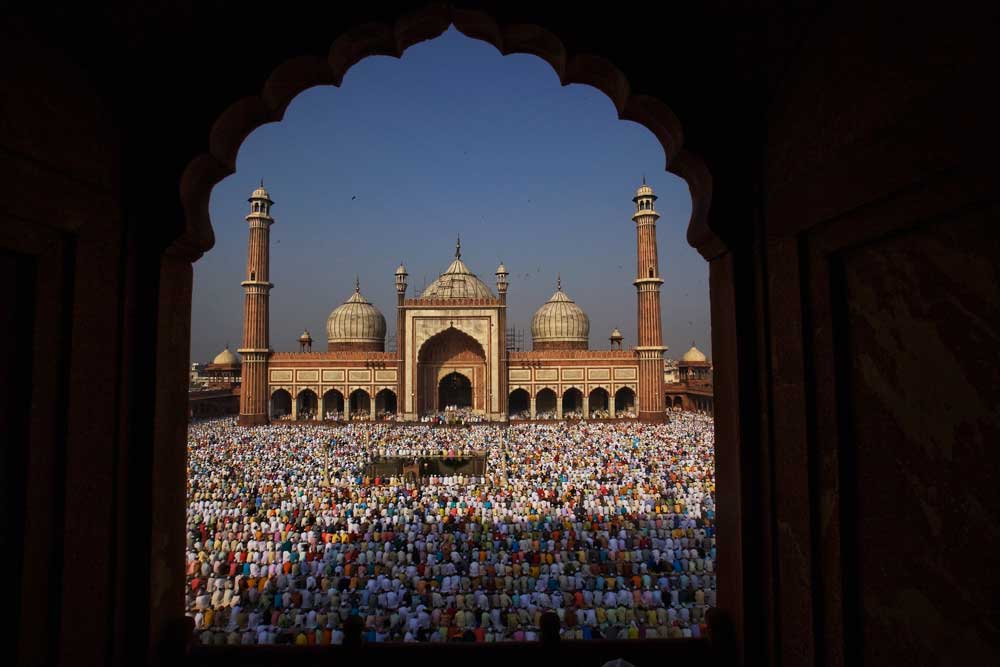 As soon as I found out about Ghazala Wahab’s book Born a Muslim: Some Truths About Islam in India, I made enquiries from my book sellers about its availability in Lahore. Unfortunately, it had not yet arrived. I have had the pleasure of reading an earlier book (Dragon On Our Doorstep: Managing China Through Military Power) co-authored by Pravin Sawhney and Ghazala Wahab. They had analysed the military strengths of China, India and Pakistan and reached the conclusion that it was in India’s best interest to have peace with Pakistan. I also believe that it is in Pakistan’s best interest to have peace with India. I have had the pleasure of meeting both the authors, Ghazala Wahab and Pravin Sawhney during my last visit to Delhi. Believe it or not, there was a time when Pakistanis could visit Delhi and Indians could come to Pakistan. Alas! That time is now gone; hopefully, people of Pakistan and India will be able to visit each other in a more congenial setting, in the not too distant future.  That factor alone as I explained in my book, Neither a Hawk, Nor a Dove created the appropriate atmosphere for resolving outstanding disputes between the two countries including agreeing to a framework for a resolution of J&K.

Coming back to Ghazala Wahab’s book, few people in India, Pakistan or Bangladesh could have written a review of this book with such boldness and generosity of spirit coupled with scholarship and depth of understanding and empathy that is characteristic of Mani Shankar Aiyar. His exhaustive, scholarly and interesting review has introduced the book very comprehensively. I would not have second guessed its quality anyway. Now we have Mani Shankar’s imprimatur—Mani describes it as “the Book of the Year”.

The subject of Indian Muslims is of great interest to me and I had dealt with it, albeit, briefly in my book. My book was aimed at promoting Pakistan-India relations based on a win-win solution for Kashmir and other disputes between two countries. I purposely didn’t not write at length because as foreign minister of Pakistan, I realised I would be treading on dangerous territory. I did, however, venture to deal with this subject because I felt that an improvement of relations between Pakistan and India would have a positive impact on the condition of Indian Muslims just as deterioration in relations between the two impacts them negatively.

To illustrate my point, I would like to narrate an incident here which I have mentioned in my book. One day during the Kargil crisis, Prime Minister Nawaz Sharif was informed by his ADC that the Prime Minister of India Atal Bihari Vajpayee wished to speak with him urgently. PM Vajpayee expressed his grievance that he had been shabbily treated by Nawaz Sharif after having invited him to Lahore. Prime Minister Nawaz Sharif looked surprised at the words of the Indian Prime Minister. The Indian PM complained that while he had been received in Lahore with such warmth, Pakistan had wasted no time in occupying Kargil. PM Nawaz Sharif said that he was not aware of what PM Vajpayee was saying to him and promised to get back to him after talking to the Chief of the Army Staff, General Pervez Musharraf. Before the conversation could end, Vajpayee told Nawaz Sharif that he would like him to speak to somebody who was sitting next to him during their conversation. PM Nawaz Sharif was astonished when he heard the voice of Dilip Kumar (Yusuf Khan, originally from Peshawar), the legendary film star who has won the hearts of generations of Pakistani and Indian film lovers, telling him, “Mian Sahib, we did not expect this from you since you have always claimed to be a great supporter of peace between Pakistan and India. Let me tell you as an Indian Muslim that in case of tension between Pakistan and India, the position of Indian Muslims becomes very insecure and they find it difficult to even leave their homes. Please do something to control this situation.” If even the great icon Dilip Kumar, as an Indian Muslim, felt insecure in case of tensions between India and Pakistan, it is not difficult to imagine how insecure and endangered an ordinary Muslim would feel.

In writing on the subject in my book, I was also motivated by the fact that some of my maternal relatives still live in India. When I write in future for the revised edition of the book as Oxford University Press has asked me to, or write another book dealing with the Modi period, as well as, rising tensions between India and China and their impact on Pakistan, I am sure I would definitely benefit greatly from Wahab’s book who has handled the subject obviously from a different perspective—as one who was born a Muslim in India.

As a Muslim, and one who has relatives in India, I am able to empathize with what she describes as “life altering events.” These feelings are shared by some of my relatives from my maternal side who still live in India and have spoken to me equally movingly about a sense of insecurity that they feel despite being economically well off.

Mani has done well to produce the exact quote from Wahab’s book describing her feelings after her family came under attack following Advani’s Ram Rath Yatra in November 1990 where she says that she “travelled a small distance from the Muslim mohalla to an upper-class Hindu colony but emotionally they had travelled the distance of a lifetime…when it came to communal division, they were nothing but Muslims. Forever suspects, forever scapegoats.”

Mani has traced the timeline of communal riots in India. I am going to quote it at length so that I can empathise, all the more, with the feelings of those targeted and also because, I have always felt that after Partition, whereas the Muslims in Pakistan (and in Bangladesh) enjoyed the fruits of independence and made rapid progress economically, the Muslims of India felt disadvantaged and were the object of taunts and ridicule by extremist elements. Mani says that “the relative calm of the ’50s was disturbed by the outbreak of an average of six riots a year over the next three decades.” He then quotes the author who walks us through Jabalpur (1961), Ranchi (1964), and the “biggest riot” (Ahmedabad, 1969)—which brought to the surface the “underlying distrust bordering on hatred between the two communities” that caused insecure Muslims to slink “into their ghettoes” and created border lines within the city “menacingly referred to as Hindustan-Pakistan.” Jamshedpur (also 1969) marked the advent of “loud cries of Jai Bajrang mingled with stone throwing.” The ’70s were a decade again of relative calm until Moradabad (1981) shot us out of our complacency. The police firing at the Eidgah marked “post-independence India’s Jallianwalla Bagh”: “the cold-blooded massacre of Muslims by a rabidly communal police force”, as activists Sharjeel Imam and Saqib Salim were to later describe it. He goes on (while quoting Wahab) : “the protests and riots spread through much of Uttar Pradesh. There followed Meenakshipuram (1981) in the deep south where RSS cadres protested the ‘mass conversion’ of the scheduled castes to Christianity. ‘Major conflagrations’ broke out in 1982 at Meerut, leaving 90 Muslims dead, ‘42 of whom were killed by the PAC (Provincial Armed Constabulary).” Then came the horror of the Nellie massacre in Assam (February, 1983) “which killed between 1,800 to 3,000 people in the span of a few hours…spread across several villages inhabited by Muslims of Bengali origin.” She also vividly describes the post-Babri Masjid destruction riots in Bombay (1992-93) and the retaliatory Muslim-led bombings of March, 1993, and from the Gujarat pogrom of 2002 right up to Northeast Delhi (February, 2020) marked by the infamous slogan coined by a minister of the BJP Central Government, “Goli maro saalon ko /shoot the f*****s”—my translation. “Then came the desecration and dismantling of the Babri Masjid (December 6th, 1991). It fundamentally altered Hindu-Muslim relations by aggravating “the sentiment that drove the violence.”

Extremists’ rightwing forces were further strengthened. With the rise of Hindutva in India, all sorts of allegations have been levelled against former Muslim rulers, and, it has even been said that the Taj Mahal was a ‘blot on Indian culture’ built by ‘traitors.’ This is so outrageous, that, hopefully, sanity will be restored in the not too distant future and enlightened Indians, who seem to have been currently frightened into silence (with honourable exceptions), by the strong-arm tactics of Hindutva supporters , will begin to make themselves heard. This narrative is historically untrue. There were many important Hindu courtiers and nobles in the courts of the various kings of the Delhi Sultanate, and, later on of the Mughal emperors. The marriage alliances of the Mughal rulers with Rajput princes were aimed, inter alia, at creating harmony among the two communities for the purpose of consolidating the empire.

Ghazala Wahab has correctly concluded that “no Muslim can win against competitive sectarianism in today’s India. Their only hope is to fight sectarianism through inclusive and progressive politics.” Mani concludes his analysis by quoting former Prime Minister Rajiv Gandhi as saying during a debate in the Lok Sabha that “A secular India alone is an India that can survive…” I would like to conclude by saying that no country, unless it is pluralistic and deals with all its citizens equally and with justice can develop to its full potential economically, socially and politically. Some countries in South Asia, in different ways, wish to play a more important role regionally and globally, but, unless they attend to their fault-lines, they can forget about their hopes and dreams in this respect.  They have already paid a big price. South East Asia, China, Japan and South Korea have left South Asia so far behind in economic and social indicators that they seem to inhabit different continents.