Gyanvapi : A Victory for the Right to Worship 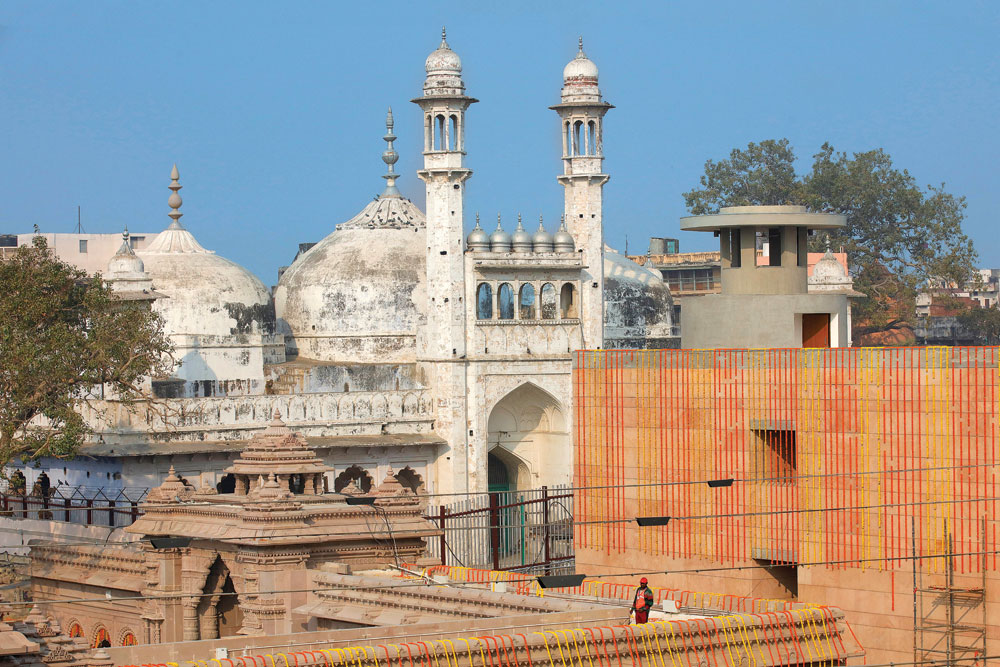 
IT IS RARE for an interim order by a court to gain prominence in a matter of hours. But that is exactly what happened when the court of the district judge in Varanasi passed an order in a case relating to access to a portion of the Gyanvapi mosque complex for Hindu devotees. A group of Hindu devotees had argued that they have a right to worship their deities, especially goddess Shringar Gauri whose image exists on one of the walls in the Gyanvapi complex.

The Gyanvapi mosque is among a clutch of disputed religious sites claimed by both Hindus and Muslims. It has had a history of violence associated with Mughal Emperor Aurangzeb, who is said to have demolished a famous Shiva temple and constructed a mosque on its ruins. The Muslim side denies this claim. The result is that the site has been the subject of a protracted legal dispute.

The case in question was filed in August 2021 in another local court. In April this year, that court ordered a survey of the Gyanvapi mosque by a commission led by local lawyers. In no time, the issue turned into a “secularism versus communalism” debate, with the usual ‘intellectual’ voices issuing dire warnings about the nature of the Indian republic itself. Unlike regular cases, this particular one moved very quickly from lower courts all the way to the Supreme Court. The apex court ordered that the suit be handled by an experienced judicial officer. The case was transferred to the district judge on May 20. His verdict came out on September 12.

The Muslim side, represented by the Anjuman Intezamia Masjid Committee (AIMC), had also relied on two other laws, the Waqf Act, 1995 and the Uttar Pradesh Sri Kashi Vishwanath Temple Act, 1983, to oppose the Hindu side. The court did not accept these arguments.

AIMC’s strategy was clearly wrong. Its reliance on the 1991 Act when there was no case of “conversion” of the Gyanvapi mosque into a temple was more than just a poor legal strategy. The trouble is that law has become the end-all for all such disputes, irrespective of the nature of the legal issues. The ban is against converting a place of worship into one of another community or denomination. In the Gyanvapi case, the Hindu side clearly showed that it was permitted to worship along the wall where the image of Shringar Gauri was located until 1993. Then they were simply banned from their ritual practice.

The lynchpin of all these efforts is the Places of Worship (Special Provisions) Act, 1991. The history of this law sheds some light on the problems associated with religious and political conflict of the kind seen at Gyanvapi and in other religious places. In the days after the court in Varanasi ruled in favour of maintainability of the petition from the Hindu side, it became common to rue the absence of non-judicial avenues to sort out such disputes. But this was exactly what the 1991 law sought to prevent, by cementing the status quo instead of any creative solution that would be acceptable to all communities in such disputes.


The lynchpin is the Places of Worship Act, 1991. After the court ruled in favour of the Hindu side, many rued the absence of non-judicial avenues to sort out such disputes. But creative solutions are exactly what the 1991 law sought to prevent

It is fashionable to allege that the present government “railroads” laws through Parliament. But back in August 1991—when the law was introduced in Lok Sabha and passed at breakneck speed—this was not a concern. The Bill was introduced in Lok Sabha on August 22; it was debated and the entire process was completed by September 18 when then-President R Venkataraman assented to the law. It was not sent to any parliamentary committee for detailed scrutiny, something demanded for any piece of legislation introduced in Parliament by intellectuals and politicians alike these days.

When the Bill was introduced in Lok Sabha, Bharatiya Janata Party (BJP) veterans LK Advani, Ram Naik and Jaswant Singh opposed its introduction on procedural grounds. They also highlighted the insufficient time given to the opposition to study the Bill. But all this was of no avail as the then speaker allowed the introduction of the Bill.

While introducing the Bill, then-Home Minister SB Chavan said the law was a promise made by Congress in its election manifesto. He also said the president had mentioned the law in his speech on July 11. In the Statement of Objects and Reasons in the Bill, Chavan said: “In view of the controversies arising from time to time with regards to conversions of places of worship, it is felt that such conversions should be prohibited.” Interestingly, the Ram Janmabhoomi-Babri Masjid case was described as forming a class and was exempted from the purview of the law. This was a strange omission. More than any other dispute, the one in Ayodhya had greatly raised political temperatures since 1989. The VP Singh government fell because of its attempts to derail BJP’s march to Ayodhya. In this atmosphere, the Congress government saw political advantage in freezing all such disputes. In the case of Ayodhya, efforts were made to arrive at an amicable solution. But these were derailed by vested interests. It was a situation where the ruling party thought in zero-sum terms: what it would gain would be BJP’s loss and the other way round. In the bargain, the government only managed to freeze the Ayodhya issue for another 28 years.

In those heady days, however, none of this was visible and the government did not want to even think about the consequences of trying to maintain the status quo in these disputes. Its goal was immediate political advantage. In this, it was aided and abetted by liberals and intellectuals who viewed the situation through a zero-sum lens too: if the Hindu side won, it was a total loss for Muslims and vice versa. No room was left for the possibility of compromises acceptable to both communities.

Nearly three decades later, influential voices in both communities are stressing the importance of non-judicial solutions. A day after the order of the Varanasi court, Faizan Mustafa, the former vice chancellor of the National Academy of Legal Studies and Research in Hyderabad, aired such an opinion. Writing in The Indian Express, Mustafa asked: “Is litigation the best method to resolve disputes between faith-based communities? Why can’t local Hindus and Muslims of Kashi come up with an out-of-the-box solution?” He added that our obsession with the law as a solution to problems—particularly religious and social problems—is the real problem.

On the Hindu side, too, there is a realisation about the dangers of such issues being allowed to fester or newer ones being created out of thin air. Rashtriya Swayamsevak Sangh (RSS) chief Mohan Bhagwat said as much when he said there was no need to look for Shivlings everywhere. RSS has, in any case, said that it won’t be associated with other movements for the recovery of temples.

Since September 12, when the court passed its order, political reactions have been muted. Most mainstream parties—including BJP—have either given a cautious welcome to the order as upholding the demand of devotees in Varanasi or have remained silent. Only the Communist Party of India-Marxist (CPM), the party most closely associated with the thinking behind the 1991 law, has criticised the order. This is along expected lines.

This is the right time to move forward and arrive at some kind of arrangement whereby potential disputes can be solved between communities at the local level where these conflicts exist. The Ram Janmabhoomi issue is out of the way and in due course the Gyanvapi case, too, will be solved one way or the other. It is likely that the Varanasi court’s order will be challenged soon and will probably end up with the Supreme Court. The Supreme Court is hearing a challenge to the 1991 law and it is hard to say which way that case will go and the time that will take. But that law has done more harm than good and has outlived its utility, if it ever had any.