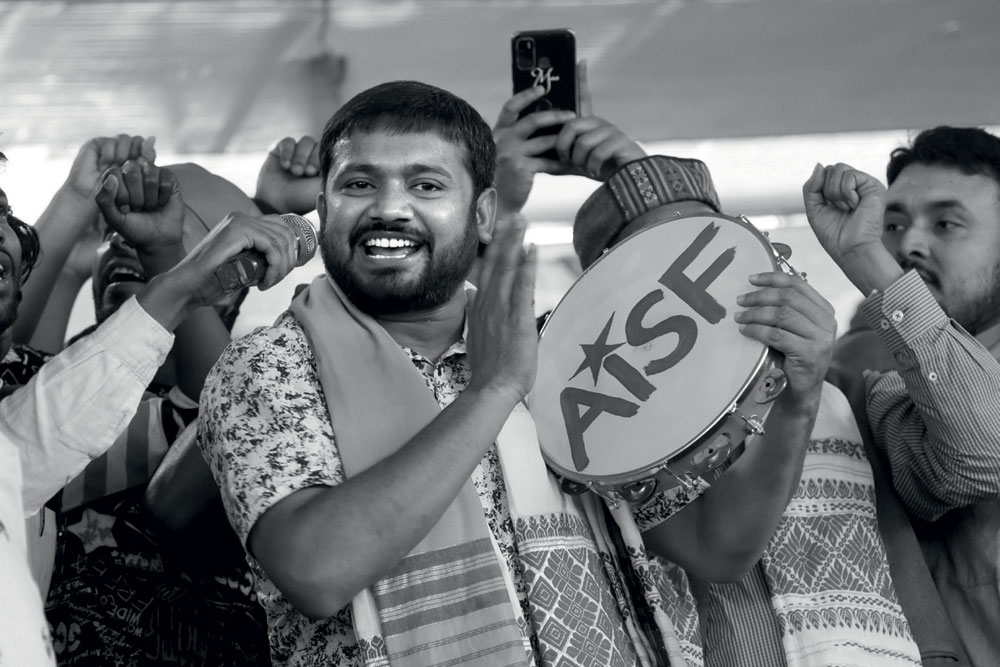 
AS CELEBRITIES LANDED AT Begusarai in the heat and dust of campaigning for the 2019 Lok Sabha elections, a local worker of the Communist Party of India (CPI) wondered if they were there for the party, Kanhaiya Kumar or anti-Modi politics. For him, Kanhaiya was just a candidate of his party which generally scorns personality cults. Yet, he knew that the crowds, largely the youth, attended Kanhaiya’s rallies to hear the 32-year-old known for his ‘fiery’ oratory. Actors, filmmakers, poets, playwrights, activists and Left leaders appealed to the electorate to vote for him, attacking those who had dubbed him a leader of the “tukde tukde gang”, a term branding him as a secessionist after Kanhaiya, who was president of the Jawaharlal Nehru University (JNU) Students Union, along with other students faced sedition charges for raising ‘anti-national’ slogans in 2016. He had denied the allegations. The case had overnight made him a hero of anti-Modi politics.

In Begusarai, where he was born in Bihat village, Kanhaiya took on the ruling Janata Dal (United)-Bharatiya Janata Party (BJP) government in Bihar, spiking his Hindi speeches with sentences in Bhojpuri, in predictable leftist rhetoric. The star power, the nostalgia of leftist sentiments in a place once called the Leningrad of Bihar, or being a Bhumihar in a constituency dominated by the landowning caste, cut no ice with voters. Political pundits were not surprised by Kanhaiya’s defeat, at the hands of BJP’s Giriraj Singh by a margin of 4,22,217 votes in a constituency on which the Left had lost its hold decades ago.

For the CPI worker, who still sees Kanhaiya making frequent trips to Begusarai, news of his meeting Congress leader Rahul Gandhi recently has left him baffled. It’s only the dry leaves that are shed in the fall, he says. His worry is that if Kanhaiya, seen as a revolutionary paladin, quits CPI then the party will lose its “shining star”. According to reports, he may join Congress by October. CPI leaders rubbish the speculation. “I have myself spoken to him after he met Rahul Gandhi. I don’t know why there is talk of him joining Congress,” says party General Secretary D Raja. Kanhaiya has maintained a stoic silence on the speculation.


The student leader, who participated regularly in television debates after the JNU case put him in the national spotlight, had gone into a shell following his defeat in Begusarai. In the Bihar Assembly election last year, Kanhaiya maintained a low profile, concentrating mostly on Begusarai seats. Some say his own party let him down by having had a tacit understanding with Lalu Prasad’s Rashtriya Janata Dal (RJD) to ensure that Kanhaiya did not steal the limelight from Tejashwi Yadav, who was the party’s chief ministerial candidate. CPI won two of Begusarai’s Assembly seats— Bakhri and Teghra, in which Kanhaiya’s village falls. Party leaders attribute his defeat in Begusarai, just about a year before the Assembly polls, partly to BJP’s campaign dubbing him as “anti-national”, and partly owing to his not being a grassroots worker. Months before the election, Delhi Police had filed a 1,200-page chargesheet against Kanhaiya and other students, accusing them of sedition for raising anti-national slogans back in 2016.

A LITTLE LATER THAT YEAR, another youth had started making waves. Jignesh Mevani, then 35, led a protest march from Ahmedabad to Una, where seven members of a Dalit family were assaulted allegedly by cow vigilante groups. Born into a family of Dalits, Mevani began his activism in trade unions, fought for the cause of peasants, Dalits, labour rights and land reforms, displaying all the trappings of a leftist disposition. A year later, when he decided to contest from Vadgam, a Scheduled Caste (SC) reserved constituency, as an independent candidate in the Gujarat Assembly election, he made it clear that his fight was against BJP. Congress and the Aam Aadmi Party (AAP) withdrew their candidates, making way for his victory. When he initiated crowd-funding for his campaign, his contributors included author and activist Arundhati Roy. Mevani, too, had emerged as a ray of hope for the anti-Modi brigade, which could no longer bank on Congress. He was seen at protests at New Delhi’s Jantar Mantar, at agitations in various parts of the country and campaigning for Kanhaiya in the Lok Sabha polls. Mevani is expected to join Congress in October, as the party strategises its revival in Gujarat, where BJP has ruled uninterrupted from 1998. Since then, for the first time BJP’s score had dropped below 100 of the 182 seats in the 2017 elections.

When Mevani fought the Assembly election, two other activists in Gujarat, Alpesh Thakor and Hardik Patel, also campaigned against BJP in Modi’s home state. Thakor, now 45, had founded the Koli Thakor Sena in 2011 and in 2016 started the “Ekta Manch”, bringing under its ambit Other Backward Classes (OBCs), SCs and Scheduled Tribes (STs). He launched a movement against liquor addiction and demanded more stringent laws against illegal trading in alcoholic drinks in the state, where prohibition has been in place for over six decades. In an interview in January 2017, Thakor was quoted as saying that he would neither join a political party nor contest elections. He, however, did both before the year ended. Thakor fought the Gujarat Assembly election from Radhanpur seat in North Gujarat’s Patan district on a Congress ticket, defeating BJP’s Lavingji Thakor. But two years later, under pressure from within his Thakor Sena, he quit Congress saying the party had not included Sena members even in its taluka and district-level bodies. He claimed that of the 77 seats Congress won in the 2017 Assembly polls, the Thakor Sena was influential in 33. Having experienced the leverages of being a politician, he switched to BJP. After the 2019 General Election, BJP, hoping to cash in on the OBC face, took him on board. But in bypolls to the Radhanpur seat later that year, despite the dominant caste in the constituency being Thakor, he lost to Congress’ Raghubhai Desai. He now faces the disappointment of his community and is relegated to the sidelines in BJP, the quest for political relevance boomeranging.

Thakor initially had opposed the Patidars’ demand for reservation in the OBC quota, crossing swords with Hardik Patel, who was leading an agitation demanding reservation for the politically influential community in government jobs and educational institutions. A Kadwa Patel, Hardik was 22 when he formed the Patidar Anamat Andolan Samiti (PAAS), an apolitical outfit, in 2015. But in March 2019 he joined Congress which was hoping to woo the Patels, who have traditionally voted for BJP. Hardik could not contest the Lok Sabha polls because of a sedition case against him after violence broke out during an agitation in 2015. In and out of jail, Patel has found it difficult to even campaign effectively for the party. In the municipal elections earlier this year, Congress failed to win over Patidar votes. Aware that his image as a politician has diminished his appeal as a social activist, Patel is sensing a feeling of alienation from both the party and the social outfit he founded. His task gets tougher with BJP recently replacing Vijay Rupani with Bhupendra Patel as chief minister, the latter being a Kadwa Patel like him, and overhauling the cabinet ahead of next year’s state elections. Of the 25 ministers, seven are from the Patidar community.

Barring Kanhaiya, the other three rose from caste agitations. Their paths intertwined. Today, Hardik Patel is in Congress while there is speculation that Mevani and Kanhaiya could soon join the party. Thakor, disillusioned with his two-year stint in Congress, is now with BJP

Every single one of the four young politicians rose to fame through a movement, each began by spearheading a cause independent of political patronage. Each of them came into the limelight around the same time—a year or two after Narendra Modi took office as prime minister. They targeted BJP and were celebrated by those who opposed Modi. Barring Kanhaiya, the other three rose from caste agitations. Their paths intertwined. Today, Hardik Patel is in Congress while there is speculation that Mevani and Kanhaiya could soon join the party, now a pale version of itself. Thakor, disillusioned with his two-year stint in Congress, is now with BJP, the party he had opposed when he made his first forays into politics.

“Their emergence is part of a paradigm, when the domineering political discourse is rightwing hegemony. They were icons of hope for anti-Modi politics, when mainstream parties provided none. They catered to millennials, not just in the metros but beyond, reaching out to Dalits, peasants, backward castes. But to think they will emerge as a fulcrum of a new mode of politics is a far-fetched expectation,” says political analyst Sajjan Kumar.

According to him, their emergence was episodic and somewhere along the line they lost traction. On the possibility of Kanhaiya, a CPI National Executive Council member, joining Congress, Kumar says he has little option but to join another opposition party if he wants to remain politically relevant. “The traditional Left is withering into irrelevance, but there is a shift to Left-centric politics. Perhaps, there is a feeling that a middle path is not enough to take on BJP.”

Political analyst and sociologist Gaurang Jani says both BJP and Congress are trying to rope in the young activists to take forward their agendas. Describing it as a “new face strategy”, he says it is easier for parties to mould the younger generation which carries no baggage of a political past.

Congress, which lost several of its Young Turks over the past year, is bound to feel the absence of its veteran strategist Ahmed Patel who succumbed to post-Covid complications last year. With Mevani on board, which appears likely, it is hoping to reach out to Dalits, constituting 9 per cent of Gujarat’s population, and the youth. The independent MLA has indicated his political proclivity, lauding the Congress leadership’s decision to appoint a Dalit chief minister in Punjab. He tweeted “the decision of appointing Charanjit Singh ji as the CM of Punjab is a message that Rahul Gandhi and Congress have given. It will have tremendous impact amongst not just Dalits but all the subaltern masses. For Dalits, the move is not just brilliant but soothing too.” For Kanhaiya, the decision to join Congress, a party pushed out of even the principal opposition space in Bihar, could be more complicated politically and ideologically. If he does join Congress, then three of the four will be in the party. From being independent activists to politicians, they have tasted blood. Their test has just begun.