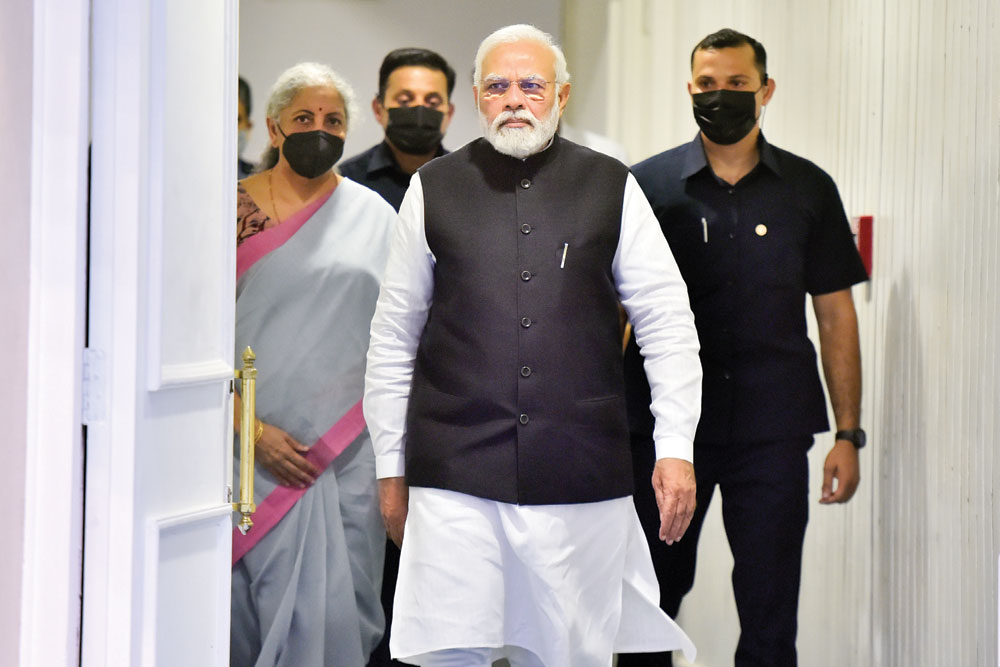 
IN THE WEEKS following Russia’s invasion of Ukraine, government officials tracking the economy noticed what they describe as two sets of the oil curve. The oil marketing companies were sinking deeper into the red each passing day while refineries were raking in soaring profits. The impact of the Russian military offensive that began on February 24 on the cost of fuel at retail points was alarming. The cost of petrol and diesel was rising two-three times in relation to the increase in crude prices. But news trickling in from the refinery sector was even more worrisome: a major private sector player had just stopped selling in the domestic market, choosing to export production and make windfall profits, leaving it to government-owned companies to shoulder almost the entire loss caused by the sudden spike in energy costs.

The situation was a concern in political terms as well, as reports that oil marketing companies had been left to bear the mounting losses would hardly make great headlines for the government. Even a large government-owned oil exploration and production company like the Oil and Natural Gas Corporation (ONGC), despite its linkages with Russian energy firms, was vulnerable to disruptions in transport and trading. On July 1, the government increased the export duty on petrol, diesel and ATF (air turbine fuel). It also directed exporters to sell 50 per cent of their petrol and 30 per cent of diesel in the Indian market. Oil marketing companies continued to bleed but less so than earlier and, more crucially, the export duties forced companies like the petro major to halt exports as the incentive to divert production abroad vanished. The resultant stability in supply and prices helped moderate inflation at a time when price rise had already become a matter of public concern and officials aver that levying the export duty was a key economic management call after the Ukraine war broke out.

GDP numbers released by the national statistical office at the end of August showed that the first quarter (Q1) of the financial year 2022-23 had recorded a growth of 13.5 per cent. GDP had grown 20.1 per cent in the corresponding quarter of 2021-22 but that had been in comparison to 2020-21 when growth had turned negative, contracting as much as 23.9 per cent due to the national lockdown that came into effect on March 25, 2020. The economy remains fragile on many counts, but the worst fears about the Ukraine war and its impact on energy, foodgrain and fertiliser availability as well as prices had not come to pass. The strong uptick in private consumption and capital investment pointed to a vigorous recovery. Private final consumption as compared to 2019-20, the year before Covid struck, stood at a healthy 9.8 per cent. Gross fixed capital formation, seen as a measure of investment, grew as well. Strenuous efforts to get the government’s capital expenditure plans rolling soon after the February Union Budget, with Prime Minister Narendra Modi leading the way by holding a series of 11 webinars with government and private stakeholders, paid off with the front loading resulting in signs of private capex reviving as well. Some commentators pointed to Q1 2022-23 GDP being only 3.8 per cent higher than in the comparable quarter of 2019-20. But the picture is not complete without noting the rise in Goods and Services Tax (GST) collections which used to average ₹95,000 crore a month in 2019-20 and have now crossed ₹1,40,000 crore for six months in a row. Even taking into account any impact of inflation, the buoyancy in revenues is obvious.

Given the shock of the Ukraine war, which broke out just as the world seemed to be stepping out of the shadow of Covid, the better news about the economy need not have come. In fact, many countries, including the US and the UK, are struggling with inflation that has breached 30-40-year records. India’s consumer price inflation was 7 per cent in August 2022 as compared to 7.8 per cent in April, prompting Union Finance Minister Nirmala Sitharaman to say that this was no longer a “red lettered” word. In retrospect, the Reserve Bank of India (RBI), which received a lot of flak from commentators for not acting to cool down prices, timed its rate hikes quite finely, curbing inflation without breaking the growth cycle. RBI’s measures had the support of the government which felt the rate hikes were not only needed but would be a feature of much of the year.


The moderation of the inflation graph has happened earlier than expected even though it is still on the higher side of the 4-6 per cent comfort zone. Policymakers point out that the Centre backed RBI decisions with several steps to arrest price rise and despite some divergences now and again, the central bank and the government have largely been on the same page at a time when the global economy was experiencing major disruptions. While price rise hurts, the discontent could turn to anger if accompanied by job losses. The backstory of India’s economic management is about getting important calls right, official sources told Open, pointing to the export duties on fuels as an example. There are other decisions that government planners took, some which preceded the Russia-Ukraine hostilities. Taken together, small and large interventions worked even as the government was forced to back-pedal on the farm reforms while it managed to weather the storm over changes in military recruitment through the
Agniveer programme.

The government exempted export of petroleum products from special economic zones (SEZs) from the windfall tax, offering some relief to private refiners. Curbs on exports of steel, wheat, rice and sugar were also driven by a desire to ensure domestic supplies and keep prices in check although this did result in a dip in export growth in July, an effect Finance Secretary TV Somanathan accepted was due to the measures taken by the government. He, however, said the Indian economy remains on course to achieve a 7-7.5 per cent growth in the current fiscal. The raft of emergency decisions that the Centre has taken is, however, seen as non-permanent. The view inside government is that these measures need to be reviewed as the economy returns to an even keel and normal growth impulses resurface. Robust growth in contact businesses like the hospitality sector is evidence of India’s successful vaccination drive. Although the response to governmental efforts at persuading people to get the third or precautionary dose remains sluggish, the vaccine coverage has seen total doses administered above 2.15 billion. On September 19, the number of recipients of the first dose stood at 38,765 and at 1,10,788 for the second shot, indicating that coverage is now pretty much universal. This in turn, along with exposure during the first, second and third waves, has created a strong immunity with T-cell responses preventing Covid from becoming a life-threatening affliction.

The backstory is about getting important calls right. Levying the export duty on fuel was such a key economic management call after the Ukraine war broke out. Today, having dodged problems like an enlarged current account deficit or a dip in forex reserves, India is the world’s fastest growing economy as 2022 enters its last quarter. The resilience of the economy and stability in finances have translated into geopolitical gains as well

GOVERNMENT PLANNERS SAY that perhaps the most consequential decision Modi did not take was going for a stimulus, along the lines of those rolled out in many Western countries, despite an insistent clamour. “Almost every economist based abroad, several of Indian origin, were calling on the government to frame a stimulus package through April 2020 to mid-2021 and again in 2022. The view of government planners was different,” said an official. Given his anti-freebie instincts, the prime minister was not in favour of a stimulus, believing the incentives to encourage production through schemes like the Production Linked Incentive (PLI), easier credit, and working capital would work better. But if the official wisdom had also swayed to the popular tune, the government might have been persuaded to consider a stimulus. The US Federal Reserve made a serious error in mid-2022 in not anticipating that it was dealing with sticky inflation, believing it to be temporary. In the US, the third budgetary stimulus of $1.9 trillion in March was akin to adding fuel to the fire, wrote Sebastian Mallaby, the Paul A Volcker senior fellow for international economics with the Council on Foreign Relations (CFR), in Foreign Affairs. Seen in the Indian context, government estimates are that an ill-considered stimulus might have resulted in 20 per cent inflation. Modi went with homegrown advice and his commonsense.

Having dodged problems like an enlarged Current Account Deficit (CAD) or a dip in foreign exchange reserves, India is the world’s fastest growing economy as 2022, which began with the shock of the Ukraine war, enters its last quarter. The resilience of the economy and stability in finances, despite burgeoning subsidies—government support for fertilisers has crossed ₹2 lakh crore—have translated into geopolitical gains as well. While several reasons, including poor returns on indefinitely occupying the cold wastes of the Ladakh Himalayas, could have prompted the Chinese military to disengage at friction points along the Line of Actual Control (LAC), the script might have read different if the Indian economy had been anaemic. It is always useful to bargain from a position of strength.