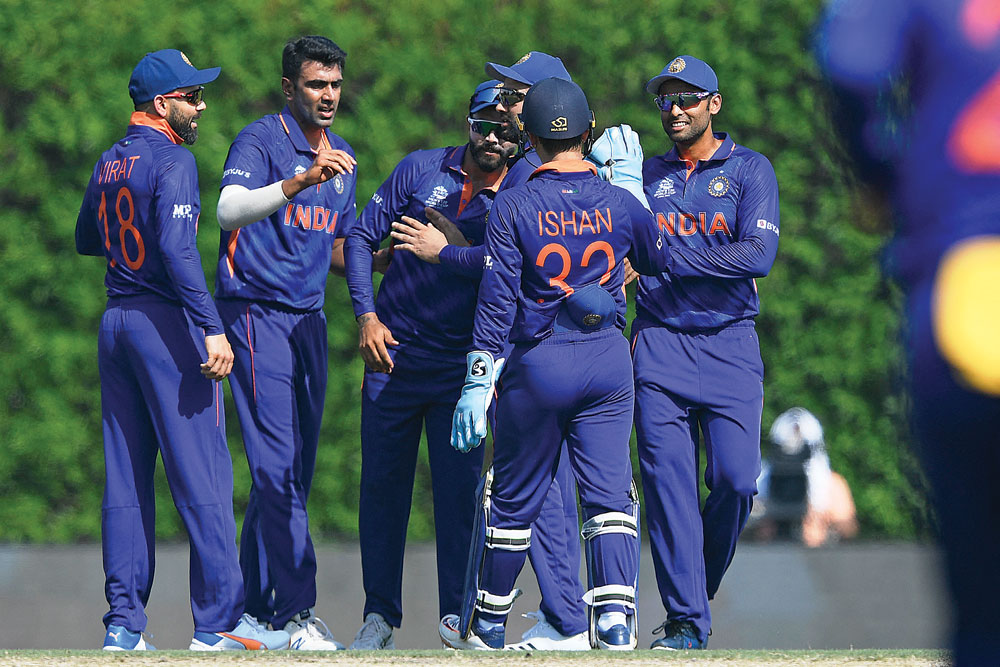 
MUCH LIKE THE last edition of the T20 World Cup, something of a churn is afoot in Indian men’s cricket. Back then, it was more perceived than felt. During the press conference at the end of the team’s campaign, a journalist asked a query that many thought of through the tournament but only a few voiced—when was the captain, MS Dhoni, going to retire? In response to which the former captain, having prepared himself for the question, called the reporter up on stage and asked if he knew someone who could replace him. As it turned out, it would be one of Dhoni’s last few international T20 matches.

Here we stand now at the start of a new, albeit delayed, T20 World Cup, with the news of a leadership change again in the air. Except this time, it is a settled matter. Virat Kohli is stepping down as captain at the end of this tournament. Ravi Shastri and the rest of the coaching staff are going away too. Rahul Dravid is rumoured to be coming aboard as coach, and Rohit Sharma the most likely candidate to take over the mantle from Kohli.

After so many years of a settled Kohli-Shastri combination, with such a strong imprint of the captain on the team culture, it is such a sudden and wholesale change of guard, achieved at such dizzying speed over a few weeks that it still dominates the airwaves and fans’ conspiracy theories. The post-Kohli phase is still about a month away. Kohli could technically captain the ODI side in the 2023 World Cup, but whether he will hold on to that position when he admittedly wants to focus on his batting is anybody’s guess.

The desire to win an ICC trophy can be gauged from the appointment of Dhoni as the team’s mentor exclusively for this tournament. One could argue that the contemporary cricket team is already attended on by a vast retinue, including a number of coaches, analysts and other professionals, to make the appointment of such a figurehead redundant. But as Kohli said in a briefing before the tournament, Dhoni’s presence will not just boost the team’s morale, but by also helping with “intricate details of where the game is going”, can help everyone “improve by that 1 or 2 per cent.”

T20 cricket, more than any other format, is a game of percentages, where an entire match invariably boils down to a single over, and sometimes, a single ball. Can the current Indian squad then, aided by the tactical nous of Dhoni, go all the way to lift this T20 World Cup?

Five years ago, on a warm, muggy night, India’s then T20 World Cup campaign had ended in heartbreak. At the semi-final of a tournament it was expected to win, on the very ground where Dhoni had only a few years prior scripted himself and the Indian team to ODI history, the team lost.

It wasn’t just a failure in a game of cricket as much as a failure in a clash of two competing T20 philosophies. Can you win by playing conservatively and smartly, a sort of guarded approach where you cut out risks and play shots that would gladden a purist’s heart? Or do you tear the batting rulebooks, clear your front legs and muscle the ball out of the park?

India’s T20 approach was built on the former model. Dhoni dubbed it the “Indian brand of cricket”, where the aim was always to reach an about par score. “Right from the start, if you think about the big hitters and start looking at 210 as a good score, you may end up getting 160 or 170,” Dhoni said at the end of one of India’s games. This approach suited them fine through that tournament until they met the West Indies’ lethal power-hitters who showed just how outdated it was. Unsurprisingly, the West Indies went on to win the title. There were other issues, too, with India’s jaded T20 approach. For all their talk of discovering talent through the IPL, they had gone with reputation, picking up spent forces such as Yuvraj Singh or Suresh Raina or those who struggle to accelerate, such as Ajinkya Rahane.

India is once again billed as favourites, along with the West Indies and England. In fact, India’s T20 squad can sometimes feel a lot like the last one. The finger spinners R Ashwin and Ravindra Jadeja, among the first to get dumped after the previous edition and replaced by wrist spinners, are back. Even Dhoni is back.

But in many ways, India’s current campaign could not be more different. While they have not entirely torn out their earlier T20 approach—with the team likely to have one of the top three batsmen, probably Kohli, still likely to function as the anchor around whom the team’s innings is built—they have otherwise tweaked their approach. They have picked up bigger and smarter hitters like the T20 format demands, individuals like Suryakumar Yadav and Ishan Kishan, and sharp relative newcomers like the mystery spinner Varun Chakravarthy, along with proven experienced T20 players who can attack even during the middle overs.

The other teams are no pushovers either. England under Eoin Morgan, for instance, have torn out the cricketing rulebooks and reimagined the way cricket can be played. The West Indies may be coming into the tournament in poor form, but they have consistently proven that their build-up to T20 World Cups are no indication of just how good they really are. A squad filled with players whom T20 franchises world over break their banks to acquire has invariably meant that they rarely have a full-strength squad at their disposal between World Cups. New Zealand, irrespective of format, always punch above their weight. And Pakistan, whom India starts its tournament with this Sunday, are no pushovers in the format either. There might be the familiar air of chaos and confusion yet again with this team, with a pretty late change of coaching staff, a new chairman at the helm, and the return of several old players. But in 20 overs, especially in a World Cup match against India, they can never really be discounted.

One clear advantage India enjoys over other teams is the familiarity of the UAE’s conditions. It may not be home, but the staging of last year’s IPL and the latter half of the just-concluded edition, has meant that it is pretty close to home. Many players in the current Indian squad have, in fact, played key roles for their respective franchises playing there.

There were a few concerns heading into this tournament. Some of the players seemed to be carrying poor form. But the two warm-up matches have dispelled those fears. The likes of Bhuvneshwar Kumar, Suryakumar Yadav and Hardik Pandya, so integral to this team’s fortunes, seem to be getting into some rhythm. The question of whether India will have the luxury of a sixth bowling option, however, still remains. But this should get clear when India takes on Pakistan on October 24th. If India gets its playing eleven correct, and their strategies right, they are going to be the team to watch out for this tournament.