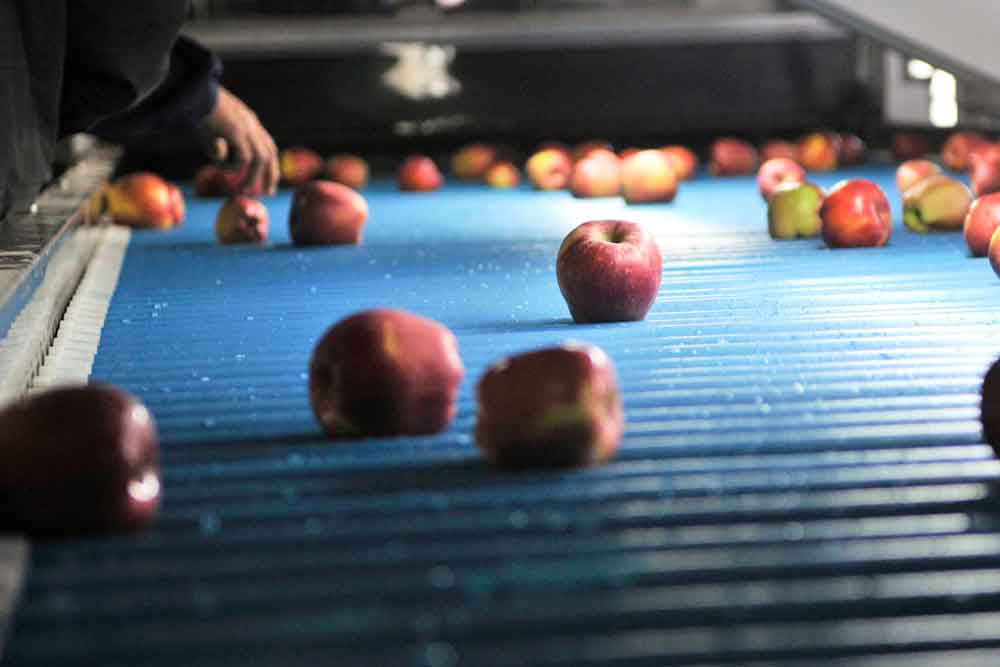 
COLONEL (RETD) SUBHASH Deswal is explaining the intricacies of carrot harvesting to a farmer. Time, it seems, is key. Within a few hours of harvesting, the crop, Deswal says, should be at Sunshine Vegetables Pvt Ltd so that it can be put in cold storage. “If the farmer loses time, the crop loses moisture. This means that it loses weight, and he gets paid less. Another crop like potato can stay out for a day, but not the carrot. The key to efficient cold storage is to understand exactly what your produce needs.” Deswal should know. He is sometimes referred to as the “carrot king” of north India. His company, Sunshine Vegetables, based out of Sikandrabad in Uttar Pradesh, is focused on the Nantes variety of carrots, also known as English carrots. If you buy orange carrots throughout the year, chances are that they come from Sunshine Vegetables and its affiliated farmers. And the key to this success lies in the efficient cold chain logistics Deswal has set up over the years.

“When we started, we used to store our carrots in cold storage meant for potatoes. But we were losing almost 50 per cent of our crop. Then we realised that carrots require a different set of conditions altogether, from temperature to humidity in cold storage,” Deswal tells Open over a phone call.  After a few missteps, Sunshine Vegetables now has cold storage of 30,000 metric tonnes capacity with the exact specifications that are required by the English carrot. “Now, we can retrieve almost 80 per cent of the crop we store. The savings from the extra 30 per cent is phenomenal.” On average, Sunshine Vegetables sends out one truck a day to different parts of the country—Chennai, Hyderabad, Bengaluru, among others. Sometimes, two trucks will head out to the same city. During the lockdown, when hotels and restaurants were shut, it was cold storage that helped Sunshine Vegetables safeguard its harvest as well as the farmers’ investments. “There is no horticulture product that cannot be stored, and its value is kept intact if you have the right cold storage conditions. From colour to quality, moisture, and freshness, everything can be maintained. If we have an efficient cold chain system in every district, every taluka, agriculture in this country would be revolutionised.”

Lemon is an Indian staple, no matter what the season. Be it as lemonade, a preserve, or a souring agent, the Indian lime is present in every household, almost always in multiples. It is one of the most overlooked fruits present in our refrigerators, but this summer it is making its presence felt. Owing to unseasonal rains last September and October, two cycles of the crop, known as haste bahar and ambe bahar, failed. A kilo of lemon currently retails from anywhere between Rs 280 to Rs 350. The stock available in the market right now is from cold storage. Until the mrig bahar is harvested in October, the scarcity will continue.

The situation is not new to the Indian consumer as some version of it plays out often enough with only the dramatis personae changing. A few years ago, it was onions that commanded an eyewatering price. Sometimes, it can be tomatoes. This year, it is the turn of lemons. “Price fluctuation in perishables is due to various factors which differ from year to year, but it can also partly be attributed to a shortage of the cold chain infrastructure. Due to a lack of it, losses in the supply chain of perishables are rather high for some commodities,” says Siraj Hussain, former secretary, Ministry of Agriculture and Farmers Welfare.

Cold chain infrastructure essentially refers to a food supply chain of perishables where suitable temperature and humidity levels are maintained throughout the entire chain, straight out of the farm gate. This includes fruits, vegetables, dairy, meats, and fish. In India, we already have an efficient cold chain supply for the delivery of dairy products, but horticulture remains another story.

The total horticulture production in India over 2020-21 is estimated to be at 333.3 million tonnes (MT). Fruit production is expected to be around 102.92 MT while vegetable production is expected to be around 199.88 MT. India today is the second-largest producer of horticulture in the world but a big chunk of this produce ends up being food loss from the farm to the retail level, and therein lies the rub. There are differing figures for what this means. In its 2018-19 annual report, the Central Institute of Post-Harvest Engineering and Technology (CIPHET) had pegged fruits and vegetable losses at 15 per cent. A previous study by the institute had identified guava and tomato with the highest loss percentage at 15.99 per cent and 12.44 per cent, respectively. Apple, mangoes, onions, and cauliflowers are also featured in the list.

An RBI bulletin from January of this year minces no words in saying, “wastage of food products due to inefficient post-harvest practices is one of the important factors behind food inflation in India.” Wastage, the bulletin lists out, takes place at almost every level, starting from improper harvesting techniques to lack of storage and processing facilities: “…there is tremendous potential to increase the availability of…horticultural crops like fruits and vegetables, by reducing wastages through the build-up of cold storages, warehousing, packaging, and cold transport chain infrastructure.”


India currently has 8,186 cold storage with a capacity of 374.25 lakh MT available. “The bulk of these are in a handful of states like Uttar Pradesh, Punjab, Gujarat. States like Assam, Jharkhand, Bihar don’t have well-developed cold storage systems,” says Minakshi Chakraborty, a rural and agricultural economist with the Mahindra Group.

“Horticulture production has been steadily increasing in India. Produce like grapes and pomegranates have the potential to generate revenue for farmers but the cold chain facility, though improving, remains a constraint,” says Chakraborty. More than 60 per cent of the country’s current cold storage is suitable only for potatoes.

However, to focus only on cold storage as such is to miss the forest for the trees. The report of the committee on doubling farmers’ income categorically states that the first-mile capacity “to facilitate market connectivity of short-life horticultural produce (e.g. greens, tomato, mango, litchi, brinjal, etc) is a vital missing link.” In this case, it would be pack-houses where the produce can immediately be taken to post-harvesting. India currently has 500 pack-houses, whereas the requirement is for around 70,000, according to the doubling of farmers’ income report. All transportation of horticultural produce should ideally take place in refrigerated trucks, also known as reefer trucks. Currently, India has around 10,000 reefer trucks though the requirement is for more than 60,000. Similarly, the number of ripening chambers stands at 1,000 though the infrastructure needs to be scaled up to 10,000.

Post-harvest management has a direct impact on the earnings of the farmer, especially small landholding farmers who due to a lack of storage capacity, sell their produce to middlemen immediately after harvest.

Ecozen, a Pune-based agriculture startup had initially helped farmers with innovative irrigation techniques but despite increased yield, it did not lead to increased income. This was because of deterioration in the quality of the produce by the time it reached the market. The company then built a solar-powered cold room called Ecofrost which helps keep the produce fresh by controlling different factors like humidity and temperature. “Lychee, strawberry, grapes, mangoes, apples, we work across various commodities,” says founder Devendra Gupta. It also offers cold storage solutions for taking the produce to the market. Startups like Ecozen help small landholding farmers by making the cold chain accessible to them at rates they can afford. Such startups generally collaborate with farmer producer organisations, a cooperative of sorts that usually consists of small landholding farmers who come together to offer end-to-end support to each other.

Vignesh is a flower farmer in Maharashtra who has access to cold storage due to his membership in a Farmer Producer Organisation (FPO). While the cold chain system is efficient for him, it is of particular use during events like Valentine’s Day and the wedding season when demand peaks, and so do the prices. “We can preserve the flowers in anticipation of the demand and then sell them when the event/day comes around. This gives me a unique measure of control over my sales,” he says.

“If a small farmer is part of an FPO, then he can afford a 5-to-10-tonne cold store. A layperson may confuse the functioning of a reefer truck or cold storage with the refrigerator they have at home, but this is highly technical. This essentially involves de-accelerating the respiration rate of produce, and is done through the controlled release of gases while maintaining a specific temperature and humidity. For this to function efficiently, we need to be aware of the physiology of the produce, be it apple or brinjal. Small landholding farmers, on their own, will not be able to afford the money that is required to lease space in a cold chain,” explains Dinesh Narayanan of Impensus Electronics. Impensus works with several FPOs and individual farmers on the ground, enabling access to the cold chain as well as the end consumer.

Backing this statement of Narayanan is the experience of Dilip Patidar, a farmer in Madhya Pradesh’s Mandsaur district. Most small landholding farmers, Patidar observes, are not even aware of what cold storage is. “In a warehouse, we must pay Rs 5 per <bori>. That, too, is unaffordable for most of us. So, why would we even look at cold storage?” Unless there is an efficient system at affordable rates, which takes his crop from his field to the consumer without a loss of revenue for him, small landholding farmers like him will not consider cold chains.

More than 90 per cent of cold storage in India is privately owned. But even government-run cold stores are out of reach for most small farmers. Narayanan gives the example of government-sponsored cold storage in Thottiyam, in Trichy, Tamil Nadu. The store has different facilities like sorting, packing, and ripening, but it is not functional. “The price calculated by the state at one tonne is too expensive for the farmer. Plus, the area suffers from regular electricity cuts, which makes the farmer question the efficiency of the store. So, it is currently not in use.”

However, FPOs with substantial membership can afford to set up their own cold stores. The government has two different schemes to provide financial assistance to set up cold storage facilities in the country—one under Mission for Integrated Development for Horticulture (MIDH) of the agriculture ministry, and the Pradhan Mantri Krishi Sampada Yojana (PMKSY). Cold storage facilities have been created under MIDH while there has been value addition to the infrastructure built under the PMKSY.

According to Chakraborty, there has been a lot of movement over the past couple of years in the cold chain sector, but the essential infrastructure is still lacking. This was a point raised even by the DFI Committee report, which includes detailed suggestions for building it from the ground up; from pack-houses designed as staging hubs to market connectivity through transport. The study had recommended preparing a district and state-wise storage plan to ensure efficient spatial distribution.

The pandemic has seen a spurt in agriculture-related startups, most of which aim to connect the farmer directly with the consumer. Companies like Ecozen and Impensus help create linkages by providing technical support and eliminating the middleman, but their sphere of influence remains limited.

“There is an urgent need to recalibrate our entire approach to post-harvest management. Everyone cannot do everything. It is not necessary that a small farmer must have access to storage. He must have access to chain linkages which eventually lead to that storage. This is key to ensuring that farmer income improves, and the customer gets the best quality available,” says Deswal.