Johanna Rodrigues is shattering stereotypes with her moves 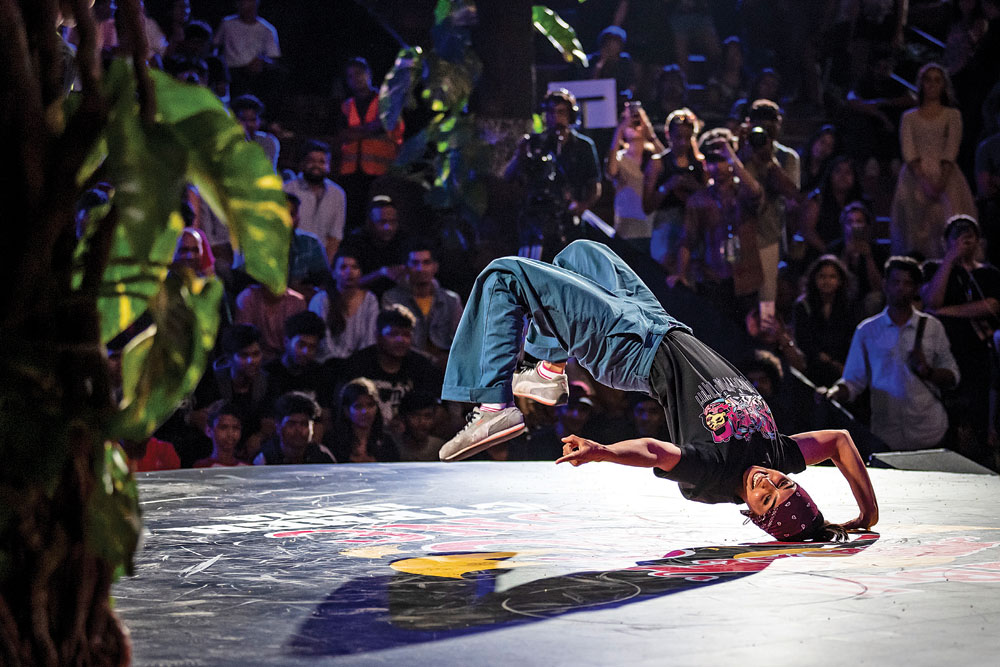 
JOHANNA RODRIGUES, who goes by the stage name B-Girl Jo, was 17 when she walked into a room full of break dancers for the first time. It was a national-level jam in Bengaluru called Freeze, which put south India’s best known B-boys and B-girls under one roof. “I just watched them for two days straight and then I’d go home and try a move or two,” says Rodrigues, who now at 25 is the first Red Bull BC One B-Girl India Champion. This means she’s not just among the top young break-dancers in India, but she will also be representing the country in the finals to be held in Poland in November. Back in Bengaluru after her tournament, she is still trying to reel in the attention she and breaking as a dance form for girls in India has received over the past many days.

“For the longest time Breaking was considered a form for boys. There were too many who thought it isn’t suited for girls, too many stereotypes surrounded us especially when we’d perform in the smaller towns. I’ve had uncles come up to me and my fellow dancers and say that we were too thin, and we wouldn’t get married because we were Breaking. Like they would be overly concerned about our bodies, more than they really needed to be. But I could tackle the sexism that existed outside of the Breaking community, because I got to be part of the international scene of Breaking, which in fact was uplifting the B-girls. Compared to other women in this country, being a part of this community has empowered me so much, that this win today holds a lot more meaning and value for me,” says Rodrigues. Breaking has helped her in many ways, from freeing her body to allowing her to be fearless on Indian streets. “Every girl or woman I know has been molested at some point in their lives. Today, I don’t feel that fear because I feel certain that I can defend myself, and maybe even inflict pain thanks to Breaking. Knowing that I am empowered in my body to defend myself… it’s incredible. Then it becomes bigger than just the stage,” she says.

Always on her toes even as a young girl, she revels in those few seconds of joy between leaping off the ground and landing back safe. “As a kid I always wanted to gravitate above the ground. Running, climbing trees, you name it. I had a cousin brother who was a few months older than me and did all of it. None of my cousin sisters could do what he did. From the age of five-six, I’d constantly compare myself to him. It was very important for me to know that I was capable of it,” she says.

Despite her early interest and curiosity about her body’s agility, it took her a while to find a form that was meant for her. Raised by a single mother from the age of six, Rodrigues didn’t discover her relationship with dance till much later. “My mother didn’t have much extra time on her hands to take me to different classes. But what she did was to enrol me into neighbourhood yoga lessons when I was 12. That itself started bringing me some kind of connection with my body at a very young age. And then as a 17-year-old when I started Breaking, it was freedom of another kind.” 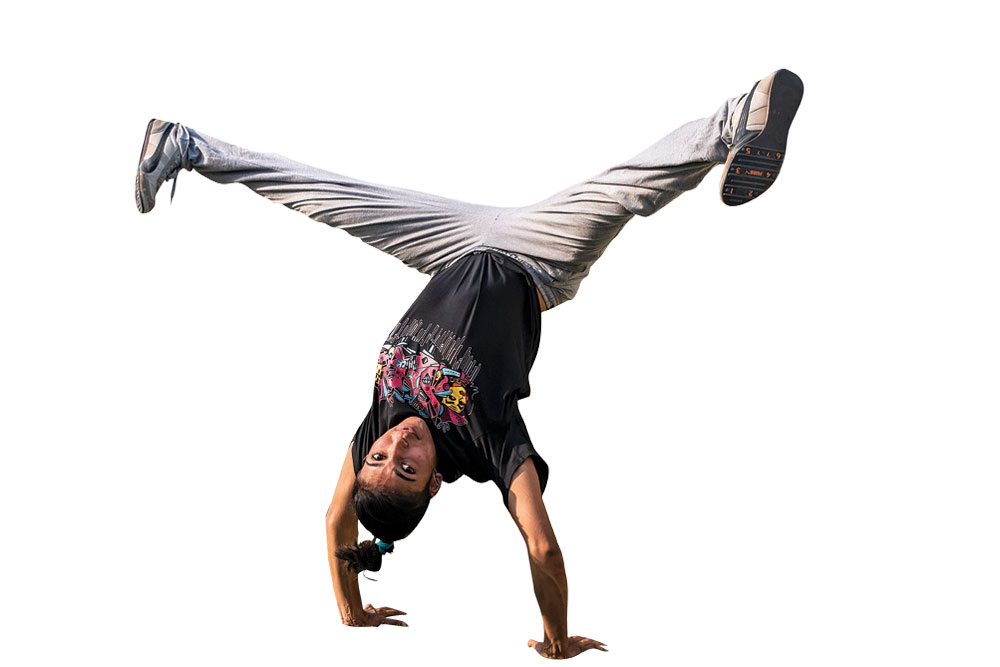 She was inspired when she saw young girls and boys break their moves to rhythm, with grace, while following the technicalities of the form. “It was like a physical puzzle in front of me that I had to solve with my body and mind. Slowly, it became a metaphor for life as well. With Breaking, I would try and break down the challenges that came to me in life too. There was a lot of uncertainty and self-doubt that I overcame because of it. Being a young girl from a very middle-class family set up, certain things were out of my reach. Choosing to be an artist, that too within a sphere that’s so niche in India wasn’t exactly ideal, but the minute I would get on stage I would feel like there’s nothing else I wanted to do,” she adds.

“It was like a physical puzzle in front of me that I had to solve with my body and mind. It became a metaphor for life as well,” says Johanna Rodrigues, B-Girl India Champion

No matter how external the form may seem, for Rodrigues, it was a way to really form an intimate relationship with her own mind and body. A relationship that was bigger than the stage, the fame, the battles that she was now ruling. “Breaking was born out of oppression, it has come from a place of artistic expression that’s dealing with difficulty. You don’t need ballet shoes to be Breaking. You don’t need anything. All you need to do is just dance. When I was learning, I would go to the beach on my own and practice a flip like 100 times over and over again. There’s something incredibly peaceful about being able to spend that kind of time with oneself. It’s just you and the form and nothing else,” she says.

Breaking also helped her deal with the rage of being in the dark about her father’s sudden death when she was a little girl. Today, without flinching, she talks about her dad who was a state-level boxer, but unfortunately lost out to drug addiction. “It’s been a long journey uncovering his life. He got caught in the influx of the drug scene that was thriving in Goa in the ’70s, and then lost so much standing in society. He went through so much shame for something that wasn’t really his fault, but a systemic issue that ruined the lives of so many youngsters. He was killed in a hit-and-run accident and there were too many questions unanswered there too. I was so angry. My relationship with my mother was impacted heavily due to it. I channelled a lot of that energy onto stage, and now I realise that if not for Breaking there is a chance I could have fallen into the same hole,” she says.

A trained yoga teacher, Kalaripayattu artist and a break dancer, Rodrigues says her dreams today are aligned more towards giving back to society. She talks of building a community that supports young artists. She runs a youth centre with fellow B-boy Joon, named Break Bramha with the sole intention of engaging the youth and giving them a place to put the fire they have in them. “The youth today need direction and with the intelligence and wisdom they have, they can thrive and do so much for the world. I want to be a movement therapist and encourage anyone who is looking for this kind of direction,” she says.

Wins and losses have always been part of her game, and the sacrifices have been significant. She can’t and doesn’t choose to live life like a regular 25-year-old. “I wake up before 7 AM and sleep early. A lot of my friends find that intimidating, but I have a promise I made to myself. Even the smallest break in routine is such a big thing to overcome. All the money I make I invest in classes or workshops with international dancers. I just bought a pair of shoes after four years. Even going out and eating, I curbed that for many years to support my lifestyle. It’s a small sacrifice, but it has to be done to live the life that I’ve chosen.”

Recently Breaking was announced as an official sport within the Olympics and while that’s a great win for the community, Rodrigues aims ever higher. “My driving force has never been money or fame. Every competitor I face, I am just seeing it as an opportunity to reach a higher version of myself. My friends recently were encouraging me to go commercial, and make the most on social media, but I don’t know if I am cut out for it. Emotionally and mentally I am a very sensitive person and I need my grounded yoga practice and time with myself to build on what I already have. If things go well, I will manifest for many what I have for myself,” she says.