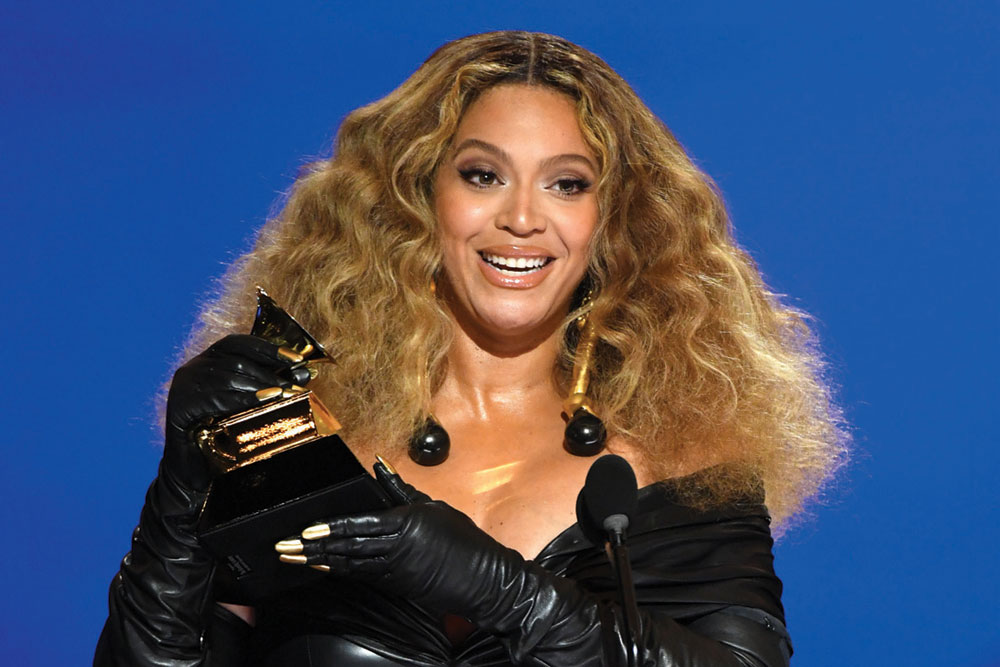 
THE FIRST OF the two arguably biggest moments to emerge from the Grammy Awards ceremony on March 15th came when the camera moving through the attendees spotted Beyoncé. The singer has had a somewhat strained relationship with the award ceremony. It has showered her with nominations and wins, but rarely handed out any of its major awards. Beyoncé even stopped attending the show ever since her album Lemonade was snubbed for Album of the Year in 2017, the award ceremony having found the album, as the allegation went, too political.

The next big moment came when Beyoncé picked up her fourth award that night (all of those for the relatively lesser categories of music video, R&B performance, rap song and rap performance). Beyoncé had just taken her career Grammy tally to 28 wins, more than any singer in history. Only the late Hungarian-British conductor Georg Solti, with his 31 Grammys, has won more than her. Even though one of pop culture’s biggest stages has allegedly failed to sufficiently recognise the force of an artist as impactful as Beyoncé, here she was becoming its most decorated singer in history.

But irrespective of the records she sets, at this moment in history, the pop phenomenon that is Beyoncé is far bigger than any stage she steps on. Her music pieces are not songs in the ordinary sense of the term. They have become vast and ambitious audio-visual extravaganzas that seek to explore larger ideas of feminism and Black identity. She is taking some of the biggest conversations around identity and race and creating instant pop culture moments in the way perhaps even the celebrated musicians of the counterculture movement didn’t do.

It is not so much what she says, but the powerful images she generates. Sometimes these are unsubtle creations, like the time she stood in silhouette in a Tom Ford bodysuit against the brightly-lit word ‘feminist’ during a 2017 performance, as Chimamanda Adichie’s words from her TED Talks, ‘We Should All Be Feminists’, played out. Or the time in her 2016 music video ‘Formation’, where she sits atop a police car sinking in water, which many viewed as a comment on police brutality towards African-Americans. These are the types of images that Beyoncé invites us to project our political ideas.

A few years ago, during Beyoncé’s ‘Formation’ tour, the writer Zadie Smith remarked on the military-like nature of her dance. In those performances, Beyoncé would raise her right arm like a shotgun and the sound of a gunshot would ring out. ‘There is nothing intimate about this kind of dancing: like the military, it operates as a form of franchise, whereby a ruling idea—“America”, “Beyoncé”—presides over many cells that span the world,’ she wrote. Yet, when she turned around to look at the crowd gathered that day, she found that they were for the most part not looking at the stage at all, but instead had turned to their friends and partners. ‘They didn’t need to watch Beyoncé any more than soldiers need to look fixedly at the flag to perform their duties. Our queen was up there somewhere dancing—but the idea of her had already been internalised. Friends from the gym stood in circles and pumped their fists, girlfriends from hen nights turned inwards and did “Beyoncé” to each other, and boys from the Beyhive screamed every word into each other’s faces. They could have done the same at home, but this was a public display of allegiance,’ Smith wrote.

Beyoncé is now Queen Bae (before anyone else). She has been for some time. You do not listen to her songs. You listen to a royal decree. She has become like a type of viral idea transmitting messages and commands through a pop song format.

She has moved on from her earlier years as a musician, where she, like everyone else, tried to cater to everyone. Her focus is now centred on the Black experience. People may be welcome to watch, but they are really meant for Black audiences. She has used the launch of her management company, which has entered into various deals with studios—from HBO for Lemonade in 2016 and Netflix for 2019’s Homecoming to Disney Plus for last year’s Black Is King—to, as an article in the Washington Post puts it, purchase her freedom from the ‘prison of the mainstream.’

As a result, her album sales are not what they used to be. But she has made herself into a cultural icon, picking up a considerable number of Grammys on the way, in the way few others have.