Basking In the Son

TRS is counting on KT Rama Rao to succeed his father, K Chandrashekar Rao, and restore the party’s popularity in Telangana 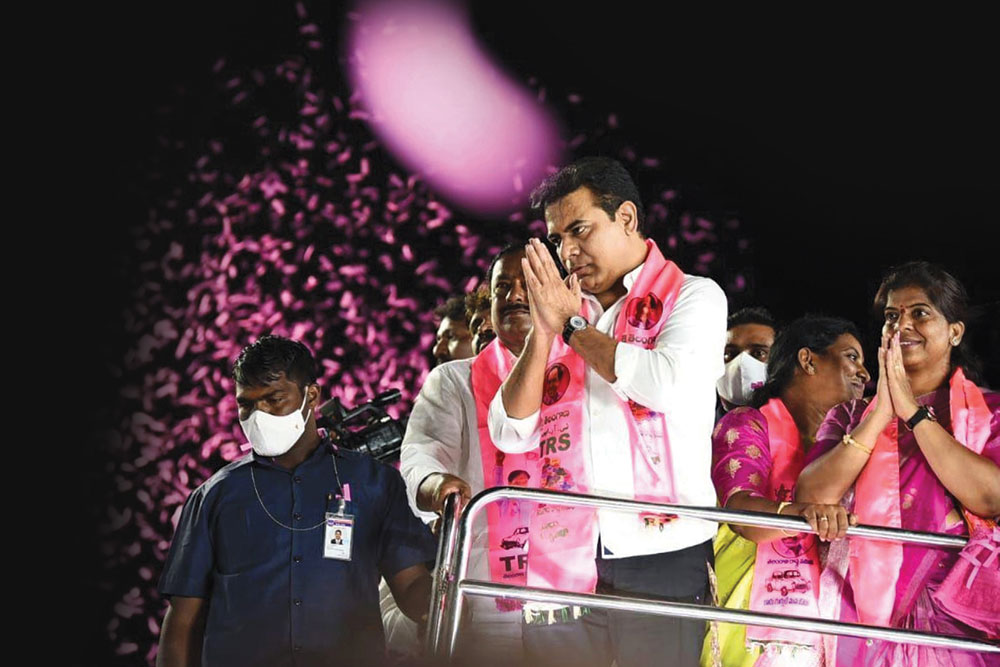 
REGIONAL POLITICS IN India tends to follow the primary law of cartoon thermodynamics—that any body suspended in space will remain in space until made aware of its situation. The prolonged moments before it scrambles to safety or loses the battle to gravity make fascinating viewing. The Telangana Rashtra Samithi (TRS) finds itself suspended in one such moment in the history of the state that it fought to found. It is the result of a gap between the self-assurance of possessing a beginning and the inability to perceive the changes afoot in the present. Successive elections in Telangana in the past two years have halted TRS’ dream run, but it is only recently that the party appears to have realised it hovers at the precipice, and begun course-correcting. While TRS swept the Assembly elections that it called for ahead of schedule in December 2018, in the Lok Sabha elections the following year, it lost eight of 17 seats including Nizamabad, where K Kavitha, Chief Minister Kalvakuntla Chandrashekar Rao’s daughter and the sitting MP, was beaten by a fresh face from BJP. More recently, in the bypoll to the Dubbaka Assembly constituency held late last year, voters turned against the ruling party. The result has been interpreted as a pique of indignation against the first family of Telangana. A TRS stronghold, the constituency falls under the purview of T Harish Rao, the chief minister’s nephew and finance minister of the state, who personally ran the campaign. Close on the heels of Dubbaka came another shocker—this time, in the 150-ward Greater Hyderabad Municipal Corporation elections overseen by party working president, heir apparent and Municipal Administration and Urban Development Minister KT Rama Rao. TRS won just 56 seats (from 99 in 2016), BJP coming a close second with 48, and the All India Majlis-e-Ittehad-ul-Muslimeen (AIMIM) finishing with 44. After the results, TRS partymen have talked about what could have been, had new candidates including a strong mayoral prospect been fielded, and BJP’s Hindutva juggernaut halted in its tracks. Ironically, settler votes, including those of land-owning Kammas whose loyalties formerly lay with the Telugu Desam Party (TDP), gave TRS a boost even as youth, government employees and others whose interests it had vowed to protect, turned away. What has become clear is that for a party that is intent on preserving its overweening numerical strength in the Assembly—it stands at 102 out of 119, after 12 of 17 Congress MLAs switched over in 2019—TRS has created a vacuum that BJP is beginning to fill.


“A number of the youth find the Hindutva rhetoric attractive,” admits Nizamabad Rural MLA Bajireddy Govardhan. “We are looking at how to finance a Rs 5,000 unemployment dole and other benefits to ease their lives.” Govardhan’s is among the growing chorus of senior voices in the party, including those of ministers Etala Rajendar, Talasani Srinivas, V Srinivas Goud and Errabelli Dayakar Rao, who are appealing for KT Rama Rao to take over as chief minister without ado. “This is the time for him to lead the youth. KCR has already given him a free rein of party matters and overall administration. If the switch happens soon, it would give us enough time to prepare for the 2023 elections,” Govardhan says. Chief among the complaints against the chief minister is his inaccessibility to the people and even to his own partymen. If KTR were to ascend the throne, he would hold court every day, says Govardhan. “It is true that a section of dummy MLAs in the party is afraid of advising KCR. But older leaders like us have walked up to him and said he should move on to playing a part in national politics.”

K Chandrashekar Rao does not wear his wisdom lightly. Observers say the absorption of Congress and TDP MLAs was to ensure that in the event of a split in TRS following KTR’s succession, he would still have the numbers to call the shots

Chandrashekar Rao does not wear his wisdom lightly. Observers say the absorption of Congress and TDP MLAs, seemingly ad absurdum, was to ensure that in the event of a split (possibly involving another member of the family) in TRS following KTR’s succession, he would still have the numbers to call the shots. The move has backfired, breeding a scaly beast Rao cannot afford to tackle directly. What he is busy addressing now are other contentious decisions that can yet be rolled back. Last year, the Telangana government pushed through two major policy changes—a string of revenue reforms, consisting of the abolition of the Village Revenue Officer (VRO) system and the passing of the Telangana Rights in Land and Pattadar Pass Books Act, 2020, to resolve land administration issues and to register properties under an Integrated Land Records Management System, the Dharani portal; and a system of crop recommendations which brought most of the arable land in the state under paddy and cotton, ensuring compliance by making farmers who deviated from the advice ineligible for the existing Rythu Bandhu scheme which gives them a financial assistance of Rs 5,000 per acre each for the kharif and rabi seasons. Both were initially hailed as visionary policies, but poor and hasty execution and market factors led to widespread confusion, putting land registrations on pause for months and leading to a massive surplus in fine grain paddy in the state. “At over Rs 2,500 per quintal, the cost of growing rice in Telangana is several hundred rupees higher than the MSP—and it is increasing with dependence on massive lift-irrigation projects like Kaleshwaram.

Other than coarse rice meant for the public distribution system (PDS) procurement, KCR also directed farmers to grow fine rice varieties for which there exists an open market, but where 25 lakh acres would have been enough to meet the state’s demand for rice, it grew paddy over a record 60 lakh acres, flooding the market. So even though kharif procurement was high, farmers are unhappy with the low open-market prices and the lack of demand. It won’t be easy to quickly switch back to growing vegetables and other crops,” says V Ramanjaneyulu, an agricultural scientist. “KCR fulfilled, for a short while, his own dream of an agrarian Telangana in the mould of Andhra, with lush paddy fields swaying in the wind,” he adds. The government has since abandoned the idea of regulated agriculture and diluted non-agricultural land registration regulations. It has also made a U-turn on the Centre’s three farm Bills, which Rao had originally opposed, announcing that it would not procure agricultural produce locally from the next season.

“KCR is not yet ready to ideologically fight BJP head on,” says K Nageshwar, political analyst, former MLC and professor of journalism. While TRS has distanced itself from its ally AIMIM, announced recruitment drives for 50,000 government jobs and promised to implement the Pay Revision Commission report, will this restore the chief minister’s popularity? “The feeling of over-centralisation of power in his hands is undeniable. But the results of a couple of bypolls and municipal polls cannot be interpreted to imply there is pervasive anti-incumbency,” Nageshwar says. TRS had won the Huzurnagar bypoll in October 2019 by a majority of over 43,000 votes, he points out. It had fielded S Saidi Reddy for the second time after he lost the seat against the Congress’ Uttam Kumar Reddy in the Assembly elections held in December 2018, while Congress had nominated Kumar’s wife Padmavathi. The Dubbaka byelection, too, was a lesson against nepotism, with BJP’s M Raghunandan Rao scoring over TRS candidate Solipeta Sujatha, widow of Solipeta Ramalinga Reddy, the former TRS MLA whose death in August 2020 had necessitated the election. Yet, Chandrashekar Rao has no option but to pass the baton to his 44-year-old son—the sooner the better. “It is the logical way ahead for the party,” says political analyst Palwai Raghavendra Reddy. “KCR has not taken up any new projects or causes—it is as if he intends to fade away from state politics, letting KTR run the show. But this is not an act of retreat or an admission of weakness. There is at present no alternative to TRS. The opposition’s sole strategy is to attack KCR—they haven’t proposed better policies. Neither will painting him as anti-Hindu work: he has done more yagnas and pujas than most state BJP leaders.”

With an eye on civic elections in Khammam and Warangal and the Nagarjunasagar Assembly bypoll, BJP is in talks with disgruntled TRS leaders and former TDP foot soldiers

“For BJP, Telangana is the gateway to power in south India,” says N Ramchander Rao, BJP president for Hyderabad and an MLC. “We never expected to win Dubbaka—the odds were stacked against us. Even in the GHMC elections, exit polls had predicted a maximum of 26 seats for BJP. There are two aspects to this: one, the feeling of cultural nationalism in the state of Telangana, which had been under the Nizam’s rule, has been amplified into a wave of support for pro-Hindu politics; and second, discontent against a single family’s feudal grip over a state that fought for swarajyam is now palpable.” BJP, which has an organisational presence in most districts, will strengthen its footprint in Khammam, Medak and Nalgonda in the months to come, he says. With an eye on civic elections in Khammam and Warangal and the Nagarjunasagar Assembly bypoll, BJP is in talks with disgruntled TRS leaders and former TDP foot soldiers. The choice of Bandi
Narasaiah Sanjay Kumar as the new BJP state president reflects the party’s focus on youth, Ramchander Rao says. “He is a rustic man with a strong Hindutva image and he speaks KCR’s language. Be it social engineering or verbal engineering, we are ready to take on KCR.”

There are no influential local leaders in TRS. It is K Chandrashekar Rao who contests each seat. The elected representatives from the party are impersonations of him. He may be a problematic role model, but the question now is: can his son, who exudes the aura of a networked CEO, dive in and fill his rugged shoes?