A Temple Lost and Found 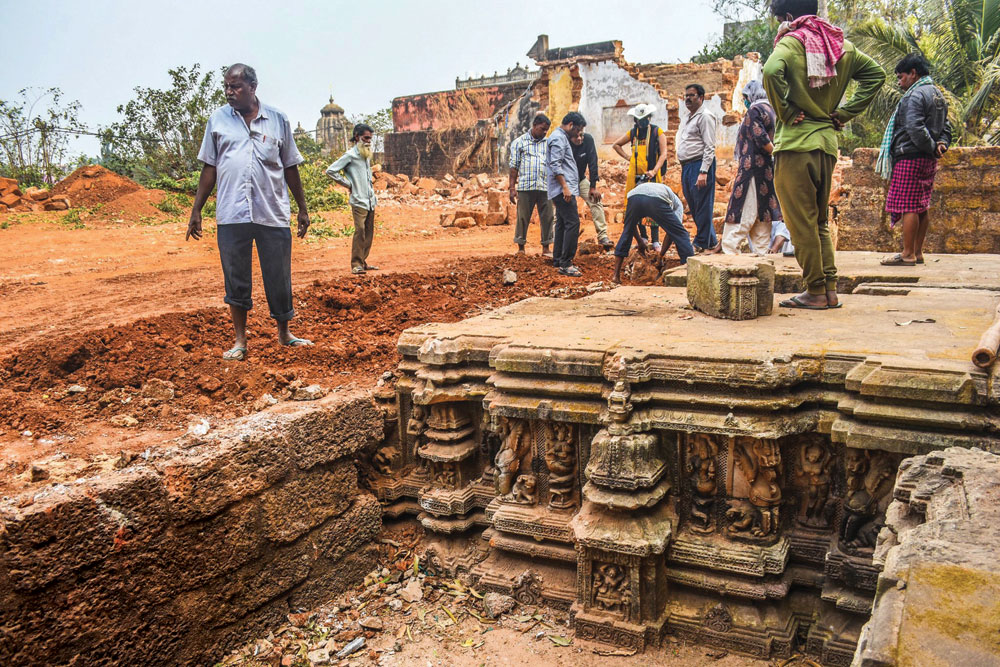 
IN THE LAST week of January, an Archaeological Survey of India (ASI) team studied some stone structures—stones interlocked with stones, carvings and mouldings—buried 10 feet below the earth in the old city of Bhubaneswar. The first thing that came to their mind was that these could be the remains of an ancient temple, partly destroyed. It was just the tip of the iceberg.

The Bhubaneswar circle of the ASI immediately stirred into action and got the digging work for the Naveen Patnaik government’s Ekamra Plan to develop the area around the 11th century Lingaraj temple, a protected area, stopped. As the ASI, which is responsible for preservation of old monuments delved further, it found signs of more temples in the heritage site. About 10 days after it stumbled upon the first temple, it found the shape of a yoni pith, the base on which the linga yoni sits. It is, however, yet to find the Shiva linga, the masculine counterpart of the yoni, one of the oldest spiritual icons connoting the female sexual organ or womb. The findings, near Sari Deul temple, where the presiding deity is Parvati, indicate the centre or sanctum sanctorum of a Shiva temple. The Sari temple is believed to have been built during the Eastern Ganga dynasty period, which reigned in Kalinga from the 5th to the early 15th century and defended their kingdom from the attacks of Muslim rulers. According to an ASI official involved in the excavation, only when they go deeper underground will things become clear regarding the time and shape of the structures, parts of which are missing.

By the time the ASI stepped in, several structures had already been destroyed, sparking off a furore over the way the demolition was conducted by the Bhubaneswar Municipal Corporation (BMC) and the Odisha Bridge Construction Corporation (OBCC) in the periphery of protected monuments. Under the Ancient Monuments and Archaeological Sites and Remains (AMASR) Act, 2010, the prohibited area comprises up to 100 metres in all directions from a protected monument while a regulated area comprises up to 200 metres around such monuments. The issue has created ripples in Delhi, where Union Minister Dharmendra Pradhan, a BJP leader from Odisha, sought Central intervention to look into the matter and “act quickly in order to salvage and preserve what remains of this priceless ancient Odishan architecture.” Though Pradhan, in his letter to Culture and Tourism Minister Prahlad Singh Patel, has not directly taken on the Biju Janata Dal (BJD) government in the state, the issue has cast a shadow on five-time Chief Minister Naveen Patnaik’s temple town development plans.

In December 2019, Patnaik announced the Ekamra Kshetra heritage project to beautify the area, in a bid to get Bhubaneswar on the list of UNESCO’s World Heritage Sites.

The architectural and historical heritage of Ekamra Kshetra, the old temple town of Bhubaneswar, covers nearly 2,000 years from the 3rd century BCE to the 15th century CE.

Several Hindu temples and complexes are on the World Heritage list, but none as a living Hindu city. The Jaisalmer Fort, one of the few living forts in the world, was declared a UNESCO World Heritage Site in 2013. As per the Ekamra Plan, for which Rs 700 crore was reportedly marked, all construction, except temples, between Lingaraj temple and Bindusagar lake will be dismantled, restoring the layout of 350 years ago, making it easier for pilgrims to visit the other temples as well.


In the letter to Patel, Pradhan, petroleum and natural gas minister, had requested his personal intervention in directing the ASI to send a team to Bhubaneswar for carrying out a detailed study and thorough scientific excavation of the Ekamra Kshetra area for unearthing heritage structures which may be buried under encroachments. “From an obeisant devotion to Mahaprabhu Jagannath to a personal commitment for upholding the cultural pride of Lord Jagannath’s cult, the Prime Minister has always prioritised the sentiments of Odia people. I am grateful to Prahlad Patelji for sending an ASI expert team to Bhubaneswar to carry out a detailed study of the Ekamra Kshetra area. The Modi Government is committed to the preservation of our cultural heritage, which is a matter of great pride for us,” says Pradhan.

In a report to the Centre, the Bhubaneswar circle of the ASI said the mouldings on the stone on edges of the exposed platform suggest it could be part of an ancient temple of ‘typical Kalingan style’, an architecture in which only certain types of stones were used. The stones could be remains of the ‘pista (platform)’. It said it was ‘pertinent to mention that during the digging work, heavy machines like JCB, tractor etc. are being utilized causing massive damage to the structures underneath’ in an area rich from an archaeological point of view. It claimed that due to the ASI’s intervention, to some extent, the ancient remains were saved from further vandalism.

That has not absolved it of the damage already caused, according to the Indian National Trust for Art and Cultural Heritage (INTACH), a charitable organisation which has been in the forefront of protests against destruction of heritage structures in the country. INTACH has raised questions about the role of the Bhubaneswar circle of ASI, which has its office just 350 metres away from the site.

“What was the ASI doing? This is the sixth temple to be destroyed. It could have been reconstructed. It was a time capsule. There were no heritage experts involved in the development work. When things blew up, the ASI sent a team. But, by then 70 per cent of the demolition for the Ekamra Plan had already been carried out,” says Anil Dhir, historian and member of the INTACH team which did a preliminary site survey, following reports that archaeological artefacts and other heritage items around the Suka Sari temple were being destroyed during demolition for the Ekamra project.

Though Dharmendra Pradhan, in his letter to Culture and Tourism Minister Prahlad Singh Patel, has not directly taken on the BJD government in the state, the issue has cast a shadow on Naveen Patnaik’s temple town development plans

In its report to the Centre, INTACH alleged violation of the AMASR Act, saying no standard laid down guidelines have been followed by the project implementation authorities and excavating teams as a result of which substantial damage has been done to this and the adjoining ancient shrines: ‘The use of heavy equipment like bulldozers, excavators, JCBs, Hyva trucks, etcetera, in a sensitive zone, filled with ancient temples, was against all norms. We saw many carved stone pieces/blocks having fine stone works scattered all around the temple premises. Some of them were identified with decorative features depicting scroll works, lattice pattern works, Nayikas, Gajavidalas, Salabhanjikas, Chaitya medallions and many more others. Even a yoni pith, which is a revered icon in Hindu religion, has been damaged and kept in one corner.’

Among the INTACH’s recommendations is stopping further excavation anywhere in the proposed beautification zone until an expert heritage committee is formed with qualified persons which should include heritage experts, historians, structural engineers, conservation architects and local stakeholders.

The issue has stirred a hornet’s nest over heritage protection. Ironically, a plan to restore the Ekamra Kshetra to its old design has ended up bruising some of its heritage, triggering a row that could delay the Patnaik government’s temple project.

According to a state ASI official, in the process of digging some structures under the Ekamra Plan around the Lingaraj temple, there has been an upheaval—other than the state and Centre-protected structures, a few others have been demolished, thereby violating the AMASR Act. The state ASI had been asking the state government since 2019 to seek the approval of the ASI’s director general to execute the work being carried out in close vicinity of protected monuments, but there was no proposal before it. The ASI team found the structure while carrying out scientific cleaning of a piece of land near the Suka Sari temple complex. Of the 80 monuments in the state under the ASI, 28 are in Old Bhubaneswar, which was also called ‘Mandira Malini (city of temples)’, and of them, eight are around the Lingaraj temple. The beautification plan envisages clearing encroachment in the area.

BJD DUBS THE issue as “political discourse” at a time when the state government had taken up a project to restore the heritage. “It did not happen overnight. Were the INTACH and ASI sleeping all these years? Both are trying to pin the blame on the government to hide their own incompetence. Do these bodies have a political agenda?” asks BJD leader Pratap Keshari Deb.

The ASI has got the digging work for Patnaik’s Ekamra Plan to develop the area around the Lingaraj temple, a protected area, stopped

The INTACH report contested dating the Suka Sari temple to the 10th century CE, during the rule of the Somavamshis, going by the excavated pista portion of a ruined temple: ‘The ASI Bhubaneswar circle is confused about the antiquity on the Suka Sari temple and its periphery temples…They have predated it to the making of the Lingaraj temple.’ It said while the ruins unearthed give the impression that the Suka Sari might have been a temple having a Panchayatana style with four subsidiary shrines, it should be understood that all Panchayatana temples don’t belong to the Somavamshi era. The building period of Panchayatana/Astayatana temples in the Kalinga arts ranges from the rule of the Shailodbhava to the Eastern Ganga period (6th century CE to 14th century CE). Just 50 metres away from the Suka Sari temple stands the Chitrakarini temple, which too exhibits Panchayatana architecture, but was built during the 13th century CE in Eastern Ganga period.

The controversy over the execution of the Lingaraj temple development plan was still raging when the National Monuments Authority under the Central Government came up with ‘heritage by-laws’ for the Jagannath temple, restricting construction that does not conform with heritage zone regulations. This was, however, withdrawn after delegations of BJD, led by Pinaki Misra, and BJP, led by Pradhan, met Patel separately. Patnaik, who visited the Jagannath temple after the by-laws were issued, opposed them saying, “Nobody can stop the good works of Lord Jagannath.” Like in Bhubaneswar, the state government has undertaken a development plan for Puri. The temple authorities also expressed concern over the by-laws, saying restricting development of facilities on land voluntarily contributed by devotees will hurt their sentiments.

Patel said the by-laws were issued without the knowledge of the chairman of the National Monuments Authority and any further work on this will be done after consultation with all stakeholders, putting the matter to rest. But the last word is yet to be said on the temple remains of Ekamra Kshetra as the blame game goes on and an old city awaits its fate.