Say It again with a Rosogolla in the Mouth

As Odisha makes a historical claim over the sweet, please remember that Bengali cuisine has been as peripatetic as Bengalis 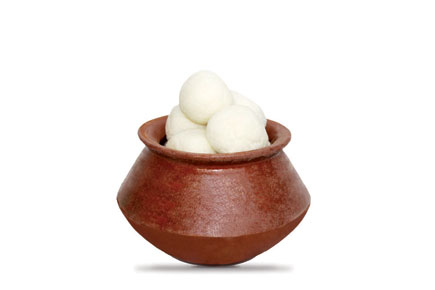 Posterity misquoted Gopal Krishna Gokhale. He didn’t say “What Bengal thinks today, India thinks tomorrow.” What he really said was, “What Bengal eats today, India eats tomorrow.” Tragically, on the very day Bengal lost 111 territorial enclaves to a neighbouring country, a neighbouring state laid claim to the most prized Bengali sweetmeat. Perfidious Albion dealt the unkindest blow. Having invited Mamata Banerjee to a party, the British government sent her the bill. And the fare didn’t even include rosogolla. In London, Didi signed no fewer than 21 memorandums of association—competing with the formidable Somnath Chatterjee whom Bengalis called ‘MoU Dada’without a single little rosogolla nibble. No wonder the skies opened in lament and storms lashed the land. The 19th century Young Bengal movement’s founder, Henry Louis Vivian Derozio, predicted ‘the heavens shall weep’. The heavens wept.

My Delhi friends say Bengali is spoken with a rosogolla (never the Hindi rasgulla) in the mouth. Far be it from me to reply that the late Prakash Tandon of Hindustan Lever was one of the few Delhiwallahs who didn’t speak English as if he was chewing a chapaati. The rosogolla taunt provides irrefutable proof that those soft, spongy dumplings of channa and semolina boiled in syrup are indisputably, undeniably and eternally Bengali. No one accuses Oriyas of munching a rosogolla while speaking, even though Puri’s pandas—priests—insist Lord Jagannath himself placated his irate spouse, Lakshmi, with the sweet after gadding about for the nine days that the Rath Yatra celebrates. Apparently, she wouldn’t let him cross the threshold without the sweetener! That’s why the pandas claim to have offered Lakshmi the sweet on the last day of the Yatra, Niladri Vijay, for 700 years. If Oriya speech doesn’t have to adjust to a rosogolla, neither does Nepali, Hindi or Rajasthani. Yet, rosogolla variants—rasbari on the Himalayan heights, rasmalai in Benares and rajbhog in Bikaner—are popular in Nepal, Uttar Pradesh and Rajasthan.

Rajasthan is an old connection. Bikaner has made rosogollas for 125 years, though not necessarily to the catchy folk tune of Patli Si Byan Khagi Rasgulla. As with so much else in Calcutta, a Rajasthani was in at the birth. It’s said a struggling young moira (confectioner), Nabin Chandra Das had just discovered the enzyme which saved his balls of cottage cheese from disintegrating when he boiled them in hot syrup, when one day a wealthy timber merchant, Rai Bahadur Bhagwandas Bagla, stopped his landau outside his shop in Jorasanko, near the Tagore mansion. Bagla’s son was thirsty. Instead of offering just a glass of water, Nabin Das courteously added one of his new sweets. The child loved it and Bagla became an instant patron.

Another story has a well-known doctor who used to take some rosogollas whenever he visited Rabindranath Tagore being forced one day to buy elsewhere because Nabin Das was out of stock. Tagore at once recognised the difference and asked him to bring only the real stuff. Nabin Das’ other sweets were also famous. When Maharani Swarnamoyee Devi of Cossimbazar, who must have been a bit of a guzzler, complained of a jaded palate, Nabin Das at once whipped up a new delicacy. “Abar Khabo … I must eat it again!” she salivated, and the abar khabo sandesh was born. It’s still going strong. A third story has Swami Brahmananda, first president of the Ramakrishna Mission, joking, “Nabin has cut off our tongues and holds them hostage!” There was more than a grain of truth in the flippancy, for while the monks had abjured many pleasures, they all had a sweet tooth. I am told Swami Vivekananda, Brahmananda’s close friend and confidant, has recorded his appreciation of my great-grandmother, BL Gupta, serving him home-made rosogollas when he called on her in London in the 1890s.

Ramakrishna Paramhansa’s wife, Sarada Devi, who died in 1886, is said to have been particularly fond of Nabin Das’s dedo sandesh. To this day, the family firm, KC Das Pvt Ltd, regularly sends dedo sandesh to the Mission in Sarada Devi’s memory. Who says Bengalis aren’t good businessmen? Nabin Das’ grandson, Sarada Charan Das, who set up the company, India’s first professional confectioners, in 1946, harnessed science to sweets. KC Das’ tinned rosogollas spread across the world. Combining the virtues of polymath, scientist and entrepreneur, Sarada Das also established the fully equipped Indian Scientific Industries in Calcutta and an in-house laboratory in Bangalore which enjoys Central recognition and welcomes postgraduate students from all over the country. The jumbo maharaj bhog rosogolla emerged from the laboratory.

Puri’s challenge can’t be lightly dismissed. Anything to do with the Jagannath temple merits utmost deference. Its colloquial English version, ‘juggernaut’—a huge, powerful and overwhelming force that crushed everything in its path—inspired far greater fear than any “Hindu terror” Sushilkumar Shinde may have mentioned. The pandas refused admission to celebrities like Kabir, Mahatma Gandhi, Rabindranath Tagore and Indira Gandhi, but, being Indian, stood aside when a German countess sailed in saying she believed in “Sanatan Dharma”.

However, the khira mohana of Odisha’s gods and priests isn’t Nabin Das’ spongy ball. Originally made in Salepur near Cuttack and in Phala village in the outskirts of Bhubaneswar, it’s bigger, softer, creamier with a velvety appearance and slightly oblong to resemble Lord Jagannath’s eyes. It’s a succulent sweet, but calling it ‘rosogolla’ is another of those conspiracies like moving the capital to Delhi and the Reserve Bank to Bombay and riding roughshod over King George V’s pledge that Calcutta “must always remain the premier city of India”.

Robert Clive was astonished at his moderation after looting Bengal but New Delhi coolly mops up Rs 40,000 crore annually in Central taxes. Mamata Banerjee suspects the Left Front of facilitating this plunder and leaving her owing Rs 260,000 crore to the Centre. Mystery surrounds Netaji Subhas Chandra Bose’s fate. Syamaprasad Mookerjee’s end is even more intriguing. Bengalis accuse Jawaharlal Nehru of jailing him in Srinagar where he died in suspicious circumstances in 1953. But inaugurating a hospital in Balasinor in Gujarat, on 10 November 2013, Narendra Modi said Mookerjee had died in Geneva in 1930 and the Congress hadn’t bothered to bring back his asthi. Modi thundered that Mookerjee was a great son of Gujarat, a freedom fighter who had built India House in London (why didn’t Didi offer to buy it instead of the Hampstead house where Tagore stayed briefly?) and was in regular dialogue with Swami Vivekananda, Dayanand Saraswati and other celebrities.

East Bengal has gone. Darjeeling might go. Sankar Ray, a radical Bengali writer, laments in DNA that only 70 of the more than 200 sweets Bengalis gorged on in the 19th century are still available. The pink payadhi dahi is only a distant memory. There was the romantically named pran-hara (‘worth dying for’) sandesh, the thick and cloyingly sweet rabri (not to be confused with Rabri Devi) and labonga lotika folded in pastry and sealed with a clove. A rosogolla didn’t bind properly unless the fat bare- bodied moira sweated profusely into the syrup just as the great Shepheards Hotel in Cairo employed only chefs with hairy chests on which rissoles could be rolled.

The grandees who patronised Bengal’s delicacies have been abolished or are extinct. The Nawabs of Murshidabad whom Clive beggared adored manohara made from coconut, cashewnut, cardamom and kheer. Maharaja Mahtab Chand of Burdwan devised mihidana, a superior form of boondi, for a British governor, Sir William Grey. Lady Canning, wife of the governor-general who concluded during the uprising of 1857 that “the only way to consolidate British colonialism in India was to break up the unity shown by the Indians in the mutiny by creating internal hatred” famously inspired a sweet called ledikenny. Even her white marble sarcophagus has gone from Barrackpore where she was buried.

Some of the famous sweet shops of my childhood succumbed to family squabbles. Others found new lines of production more profitable. New establishments dominate the market and new sweets titillate Bengal’s palate. The master moiras didn’t guard their recipes like state secrets like many European cheese makers, and new generations of confectioners play around with formulas to invent ever-changing variations on a theme. Most are inspired by the rosogolla or Odisha’s khir mohana. While the sandesh comes in many fancy shapes, colours and flavours, the rosogolla is a constant. It isn’t to everyone’s taste, however. It was hilarious watching my fellow lodgers in England in the early 1950s trying to negotiate rosogollas with knife and fork when my father sent me some tins. The syrup squirted out and fragments of sponge fell off fork prongs: England’s marshmallow, made from sugar, albumen and gelatin, was more to their insular taste. I was relieved. It meant I could wolf the rest of my hoard without feeling obliged to share it with anyone.

But while the rosogolla was spurned in Manchester 60 years ago, it will go places next year when the Indian Space Research Organisation sends its first men into space. Those intrepid adventurers won’t miss home food in the cosmos. The desi packages created by Mysore’s Defence Food Research Laboratory and which can easily be deployed in zero-gravity situations include upma, idli, parantha and of course rosogolla. The dehydrated, bite- sized servings can be opened and served without hassle. India aims at culinary unity in diversity even in space.

Meanwhile, Odisha’s pretensions recall the courtship scene in Shakespeare’s Henry V where the French princess has misgivings about marrying her country’s enemy. The English king promptly assures her that far from being an enemy, he loves France so much he won’t part with a single French village. Bengal embraced Assam, Bihar and Odisha when the rosogolla was invented. As for Geographic Indication, Jaswant Singh maintained India knew no borders until Western colonialism foisted territorial boundaries on us.

Who would have thought Hemvati Nandan Bahuguna, the former UP Chief Minister who joined Charan Singh’s Bharatiya Lok Dal, was a common or garden Mukherjee, Banerjee or Chatterjee whose ancestor had energy enough to cure a Maharaja of Tehri Garhwal’s ailing son and bask in the royal title of bahu guna, many virtues? Not all surnames are lost. Sometimes, they can be a giveaway. Suspicion is bound to lurk about the ethnic origins of the Odisha confectioner, Bikalananda Kar, who is credited with inventing the local rosogolla. History knows him as Oriya, just as Arnab Goswami is officially Assamese. Bengali culture and cuisine have always been as peripatetic as Bengalis.