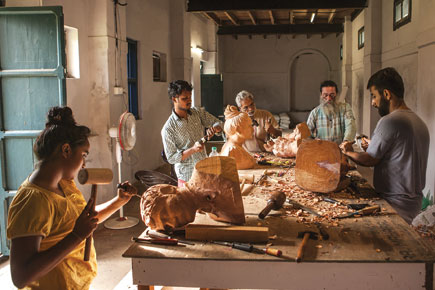 Contemporary Indian art has gained visibility as India’s economic strength has increased. Indian art and artists have become known the world over. However, Indian art was being represented and promoted by museums and curators abroad. There was an urgency for purposeful platforms in India that responded to the needs and conditions of contemporary art.

The Triennale-India that used to take place in Delhi, founded by visionaries like Mulk Raj Anand, unfortunately lost its energy many editions before it finally folded. Many people have tried to revive the Triennale, but somehow it hasn’t worked. There was an attempt towards a biennale in Delhi around 2005, which didn’t take off because there was no support forthcoming from the state.

So when the then Minister for Culture of Kerala, MA Baby, asked Riyas Komu and me about doing something for contemporary art in the state, we proposed the Biennale. The government encouraged and supported the project, and with the help of the artist community in India and our various patrons, the Kochi-Muziris Biennale was realised. It is, in that sense, the fulfilment of the dreams and convictions of many people who wanted to create and strengthen spaces for contemporary cultural practices in India. The Biennale has also become an opening from India into ongoing conversations in the global art world; a space where art from India can represent itself.

The Kochi-Muziris Biennale is not simply a platform for the presentation of art that is being produced today, but also for the production of forms of contemporaneity. In the standard portrait, the South is full of rivers and palaces; full of nature and pasts.

The institution of the museum has served this function of conservation of the past. Of course, the role of the museum as custodian and vehicle of memory is valuable. However, there is the danger, and this happens frequently enough, of art being reduced to objects that gather dust, either in front of us or in the back-rooms of the museum.

The Biennale is, I think, a necessary space where artworks are alive, where they provoke and continue conversations. The Biennale also has a public nature: it moves outside galleries and museums into larger and complex public spaces. This public nature means that the Biennale becomes an eminent point of contact between art and community, exposing one to the other.

The Kochi-Muziris Biennale becomes an occasion to produce a distinctive sense of the contemporary that refuses the representation of centres of power. Okwui Enwezor, after visiting the 2014 Kochi-Muziris Biennale, observed that it was a location from where one could “think the South in a deep way from the South.”

The Biennale has not just asked people to come and see art. It has been an invitation to the political-cultural disposition of the Malayalee. I think the thoughtful, argumentative and many-hued responses to the form of the Biennale and to the concepts of the two editions demonstrate this. The state of Kerala has had a rich tradition of public action involving aesthetic interventions, and the Biennale is in participation and an extension of that. The Biennale has sought to be an intervention not in contemporary art, but in the cultural milieu of India.

This is why the Kochi-Muziris Biennale has been conceived not as a periodic event, but as a concert of actions. Kochi Biennale Foundation operates 365 days a year, developing and executing programmes that include research and artistic residencies through the Pepper House Residency, educational interventions through the Student’s Biennale, the Post-Graduate Residency Programme and the Master Practice Studios, public conversations and discussions through the Let’s Talk series, infrastructural and creative support for lens-based practices through KBF Video Labs, and the Artists’ Cinema programme, to mention a few. Kochi Biennale Foundation is not interested only in the exhibition and circulation end, so to speak, of the art-world, but also in the development of artists.

Culture is always a big catalyst for the local economy. The Kochi-Muziris Biennale has boosted Kerala’s tourism, which is the biggest contributor to Kerala’s economy. The two editions of the Biennale have seen almost a million visitors. Interestingly, the Biennale in Kochi has also precipitated an increase in visitors at art events in locations in West Asia, where there are large working populations from Kerala.

I would like to think that the Biennale has not just gained new audiences for contemporary art, but also activated new publics with different senses of discernment and approaches of inquiry. The Kochi-Muziris Biennale continues its tradition of having an artist at the helm, with Sudarshan Shetty curating the third edition, which will open on 12 December 2016.