We have to get our lives back, says Sanath Jayasuriya 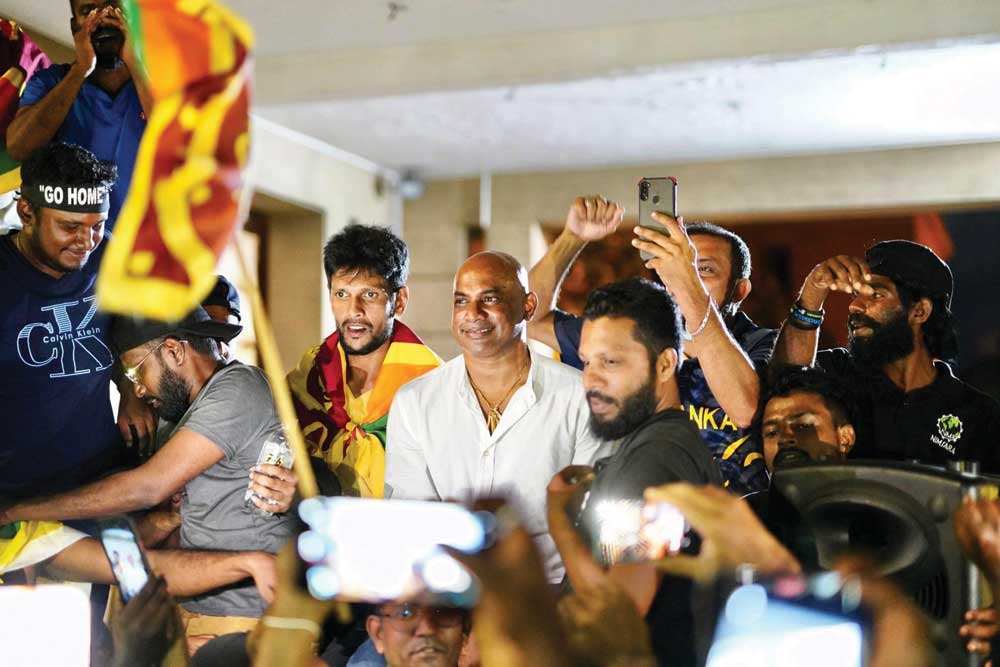 Sanath Jayasuriya participates in the protests against Gotabaya Rajapaksa in Galle


ONE OF SRI LANKA’S best known ambassadors, former cricketer Sanath Jayasuriya, is doing his bit to help the people of the country. He is insistent that the protests remain non-violent, which is easier said than done. He spoke to Boria Majumdar from the streets of Colombo.

Sanath, my thoughts are with you and the people of Sri Lanka. We have all seen visuals of what’s been going on. But it is important that you give me a firsthand account from the ground.

The country is in shambles Boria. People are suffering on a daily basis and the intensity of the suffering has only increased over a period of time. We have already had 20 deaths while standing in petrol queues. And trust me, there can and will be more. There is no electricity for days and hours on end, no cooking gas, no food, bread costs 500-600 rupees a pound. What more can I tell you? The transport system has collapsed. Trains aren’t running, buses aren’t running, and yet you saw people travelled to Colombo to protest last Saturday (July 9). This is because they are all frustrated and are at their wits’ end and want things to change. They want the president and the prime minister to resign for they have failed the people of Sri Lanka.

Very strong words there, Sanath. But what I fail to understand is how you see a way forward from here. How do people get their lives back?

I’m afraid there is no shortcut. If we think all this can end overnight, we are mistaken. But there has to be a start. Elected representatives are elected to do a job. To help people. To solve their problems. Address their suffering. That’s why they are there. Here in Sri Lanka that’s where the people feel let down. That’s why they want the president and the prime minister to go. Because they have not been able to help people. That’s why the protests. The reason people have assembled in Colombo, braving all the hardship, is because they feel this is a start. And this is where change will start to happen.

As an ambassador who has made Sri Lanka proud, how do you see your own role in a situation like this? Are you willing to take more responsibility? I was hearing an interview of yours where you spoke out for the people.

You have known me for 15 years now and you know me well enough to understand that I will always speak out for my people. I have no ulterior motive. All I want is that my people do not suffer. Everywhere I look there’s pain and sadness. When you step out onto the street you see people crying. You see mothers, children, women—all of them suffering. They are all standing on the road hoping for things to improve. How do you stay silent seeing all this? At the same time, you don’t want violence, for violence is never the solution to anything. We need the protests to stay non-violent and demand change. That’s how we can address the situation. It is hard because you want to act and feel angry with what is going on. But that’s the challenge and that’s where I want to make a difference. By making people understand that peaceful, non-violent protests are a way forward.

The president is on record saying that he will resign on June 13. The prime minister has also expressed his willingness to resign. Do you think that if they do so, things will start to get better and people will feel vindicated?

They have expressed their willingness to resign. But we need to see what actually happens. We need to see action on the ground and if people are willing to stand up to what they say. People want the president and the prime minister to go because they haven’t been able to deliver. As leaders of the country, they owe it to the people. They owe it to Sri Lanka to give us the basics all of us need. When that doesn’t happen, it’s only natural that people will turn against them. They demand action. This is always the case and it is no different here in Sri Lanka.

But Sanath, this is an economic crisis of humongous proportions. For a situation to degenerate to what it has, is plain sad. That’s what the world is stunned to see. The Sri Lanka I know is vastly different from what we are seeing now. And in the middle of all this, we have a cricket series going on.

Sport is a ray of hope. Always will be. That’s what sport teaches you. In my case, I am who I am because of sport and that’s what I have learnt from sport. Not to give up and always fight for what is right. And what I believe is right. That’s what I am trying to do. Stand with my people at this hour of crisis. Try to be of any help that I can possibly offer. And yes the crisis is indeed of humongous proportions. Imagine a situation where you are standing for 24 hours in scorching heat to buy bread. Or buy petrol. Can you even imagine such a scenario? That’s how dire the situation is. And we have to get out of this. The bottomline is we have to come out of this situation and get our lives back again. Everything you are seeing is geared to that end and I hope and pray we see some solace at the end of this suffering.