A fire that burnt our home and consumed our lives 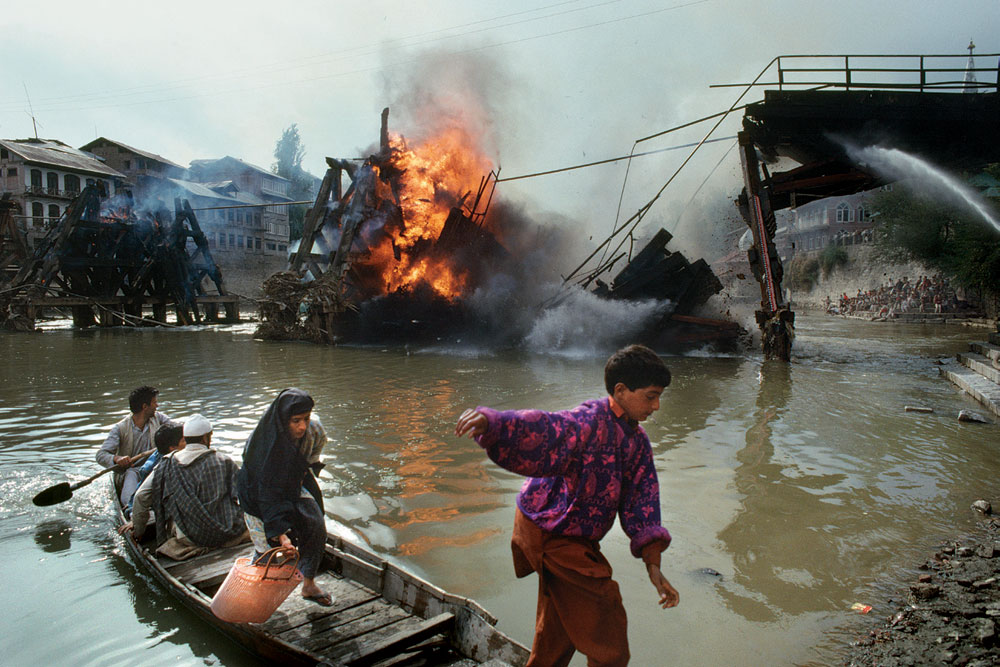 
THE SUMMER of 1990. Delhi Tourism Coffee Home, Baba Kharak Singh Marg. If you were looking for a friend, or a relative or just hoped to bump into someone you knew, this was the ‘go to’ place.

You paid five bucks, and picked up a sickly, sweet coffee, poured out of an aluminium dispenser, and sat and drank the coffee slowly. Sometimes your sweat would fall into the stained mug, but it didn’t matter. That day, I was staring at my coffee, trying to read the coffee mug, when I heard a typically Kashmiri, nasal voice wafting across from the adjoining table. I looked up from my mug, and I saw an elderly Kashmir Pandit gentleman, wiping sweat off his forehead with a hanky that had clearly seen better days.

I heard him say it had rained in Kashmir that day. He was smiling beatifically, as though a rainy day in Srinagar would bring him respite from the heat and dust of Delhi.

I often wonder whether he is alive. Maybe he is senile now and keeps muttering about how it has rained in Kashmir ‘today’. Or did he die soon after I saw him, in a tattered tent in a camp, clutching on to the same worn hanky with italicised ‘P’ embroidered on it. And if he died, what killed him? Snakebite or sunstroke or heartbreak? And while he was dying, was he hallucinating? Did he think he was dying in Kashmir, did he imagine he was dying under a Chinar tree with snowflakes twirling all around him, and was his last sip, a kind melting snowflake that landed softly on his lips?

I wonder if he died after 1990, or metaphorically at least, did he die when he was forced to leave Kashmir in 1990? Is it possible that his body crossed the Jawahar Tunnel, but his soul got left behind?
Those days, newspapers in Jammu had a thriving business of publishing the obituaries of Kashmiri Pandits, who were embracing death as though it were the only way to find peace. I often imagine what his obituary would have said. ‘Our beloved Pushkar Nath Dhar, Headmaster, ’originally Resident of Tanki Pora, Srinagar, clung on to his memories and a hanky with ‘P’ embroidered on it, for four years but finally passed away on such and such date. His last words were I-heard-it-is-raining-in-Kashmir.’

I wonder if it rained in Kashmir that day. I wonder if God shed a few tears, and wiped them slowly with a hanky that had ‘G’ embroidered on it, in italics, with a little flourish.

As a way to survive, and possibly to preserve my sanity, and to avoid behaving like a fool in my old age, I conditioned myself, early on in life, to never ever say, ‘I heard it rained in Kashmir today.’

Why on earth should I care if it rained or snowed in Kashmir?

I was sitting in a café in Delhi, with a friend, having a cup of coffee. But unlike that day in 1990, it wasn’t a sick looking coffee, it was a Jamaican Blue Mountain Java.


Every time I have a nice coffee, my mind travels to the land of its origin. I imagine the texture of the soil of that faraway place. I wonder whether it had rained that year. I try to visualise the weathered hands that had plucked the beans, and like in a movie which featured two losers on a wine-tasting trip to Napa Valley (one of the losers being a writer like me), I ask myself, is the man who plucked these beans alive or dead? Did he clutch on to a monogrammed hanky with his initials on it while smelling the beans for the last time.

I woke up from my reverie, and uttered the words that I had sworn never to speak.

“I heard it rained in Kashmir today.”

And then over the next couple of days, as the waters from the Jhelum angrily tore the banks apart, I got glued on to my news feed. I began to get nightmares with murky muddy waters eating up beautifully carved walnut-wood furniture of both friends and strangers that had been passed down from generation to generation. When a heartbroken friend told me how their beautiful furniture was rotting and floating around in her house, for a second I saw alligators moving gently through her home.

The thought of homes being destroyed in the floods of 2014 evoked the same painful intensity as the thought of my home in Srinagar being eaten up by an Islamist fire in 1990, a fire that burnt our home and consumed our lives. My father’s collection of metal-chromium tapes that stored his memories of his student days in America. Fleetwood Mac. The Beatles. The Carpenters. Books. A translation of the Holy Quran by some famous guy whose name I have forgotten. A Kashtron colour TV that my father had purchased on instalments. The bedcover in my parent’s room with needlework chinar leaves done by mother. An ugly fire that was lit by ugly men who were probably doing an ugly jig to the rhythm of ugly slogans that were being blared out of the loudspeakers of mosques.

The waters of the Jhelum finally receded, and one day the phone rang. It was a friend calling from Kashmir, whose home had been destroyed in the floods. He spoke in Kashmiri and no translator can do justice to what he told me.

“Ajoy’a, I would always say, what we did to the Kashmiri Pandits was evil, but till I lost my home to the floods, I could never really understand what we did to you. Now I do.”

I thought the fire of 1990 would be doused by the floods of 2014, there would be a collective realisation of what loss of home means, and possibly reconciliation, but sadly it did not pan out that way.

The floods of 2014 are as much a milestone in my life as the events of 1990. They made me hit middle age. They transformed me into a somewhat anxious person. They also turned me into a person obsessed with the weather in Kashmir, a person who in the middle of Delhi’s unbearable summer, feels better when he wipes his sweat, smiles and awkwardly says, “I heard it rained in Kashmir today.”

I have no idea whether it will be sunny or cloudy tomorrow, in Gurgaon, where I live in exile.

After 1990, my father had recurrent nightmares. He would talk in his sleep, sometimes asking my mother to go to Habba Kadal and check if his name was on a hitlist pasted on a lamppost there

My Google feed is set to the weather in Kashmir. When the waters of the Jhelum rise to ‘danger level,’ my heart sinks. When I see videos of kids in pherans playing while it is snowing in Srinagar, I feel a joy that I can’t describe. I whisper ‘Nausheen Mubarak’ to myself.

When my brother calls me from New Jersey and tells me that it is snowing, I feel nothing.

The fire that destroyed our home in Kashmir wrecked everything, except an olive green jacket that my father had got for me from America. It was discovered in the burnt-out shell of our home hanging from the door of my room, with just a few burn marks.

But nothing feels like the one I had in Kashmir, the one I wore when I cycled on a frozen Dal Lake sometime in the early 1980s.

I’ve led a very interesting life. I have stories to tell. I’m the custodian of many stories that I can’t even tell. But I must let you on to a little secret.

I have many quirks, but this is truly strange. I have no interest in buying clothes that are in fashion. Or brands that are cool. But I obsessively seek, and purchase stuff that you need in places with extreme cold. Jackets certified for -20 degrees. Snow and waterproof shoes certified for -25 degrees. High-end thermals certified for Arctic expeditions. Merino woollen socks and sweatshirts with anti-bacterial treatment. Down jackets. Snow sticks. Gloves certified for -10 degrees. Balaclavas. Mountaineering pants with snow guards that you slip on and then you can walk in the snow without a care. Last night, I messaged my brother in America that I will die if he doesn’t send me a waterproof, down jacket with 800 certification, which I’m told is some kind of gold standard.

I don’t need all this. I don’t use any of it. I live in a hot place. But I hoard and hoard and hoard. Maybe subliminally, somewhere deep down inside, I’m preparing for a journey.

After 1990, my father had recurrent nightmares. He would talk in his sleep, sometimes asking my mother to go to Habba Kadal and check if his name was on a hitlist pasted on a lamppost there. Sometimes he would just scream. “They have come to kill us.”

He lived with his demons. I had a better way of coping with mine. I would avoid sleeping. After father passed away, I had one consolation. That he was in a happy place where his name on a hitlist would evoke no fear.

My insomnia lingered for many years. Then I heard that you have relaxing tracks on the internet that can help you sleep. I found a track with the sound of the sea. It didn’t work. I stumbled on to a beautiful track of rain falling in a tropical rain forest. That also didn’t work. Finally, I found a 10-hour track that has the pitter-patter of rain falling on a tin roof. After this discovery, I have slept peacefully. The sound of rain falling on a tin roof takes me home, I feel I’m in my bed with a kangri, I can sense the willow tree outside my window, swaying in the breeze.

As the years go by, a sense of mortality has begun to creep in. I don’t know if I want to die in Kashmir, like many others, who have posted videos saying that their ashes will be immersed in the waters of Kashmir. That’s because, like Pushkar Nath Dhar, I never left Kashmir.

But I’m pretty sure that if I don’t die in Kashmir, I would not want the Bhagavad Gita or any religious balm to be applied to my soul while I’m breathing my last. I would want you to play the sound of the pitter-patter of rain on a tin roof.

“They say it is raining in Kashmir.”