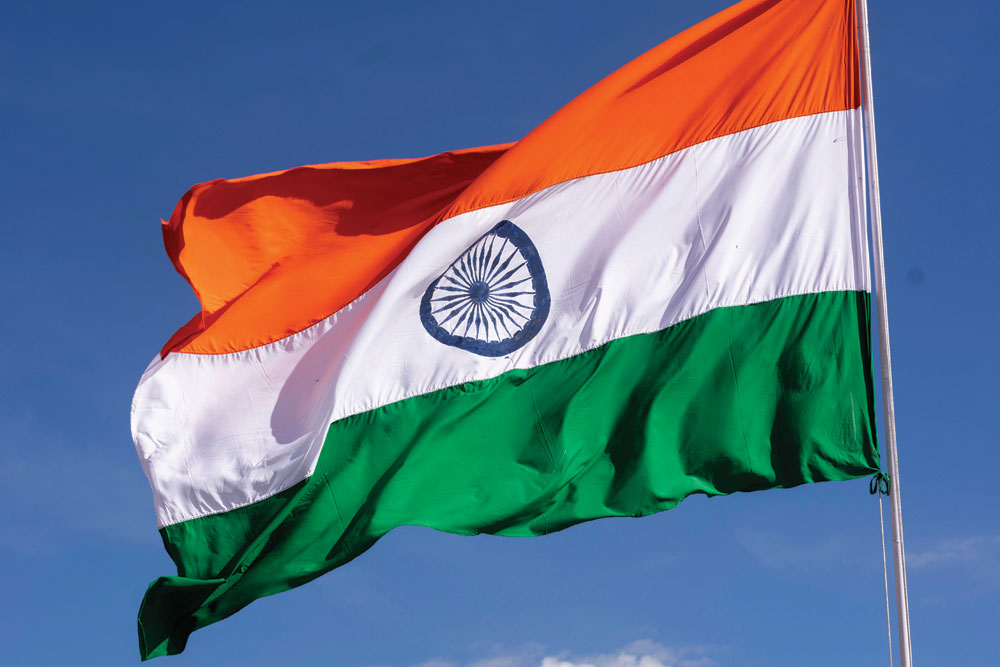 
THE NATION IS AN IDEA AND IT IS ONE given by a people to themselves. For the idea to be­come real, geography is not enough. Land, after all, is inanimate. It does not know that this is where it is one country, and then another. That is something for those who live on it but if they have to envision it, how do they do it? Every time they think of India, can they see within their eyes a map with the borders marked? Cartographers might do it but that is not how citizens relate to what they consider is their country. The devices to bridge this need are symbols. You agree to make something—an object, a song, a name—a representation of the nation, and now there is something physical to breathe life into a construct. It is almost magical in that sense. From nothing, a great entity comes into being and it is one that holds near-total command over all those under its umbrella. Among what makes up this magic, the flag is crucial.

It is a symbol that existed even before nations were born. In the past, when the primary loyalty of people was not to the country but to the king, he, too, had flags. Armies went into battle with them. The flag has been emblematic of groups far back in history. Mentions of flags in India date to ancient times. In the Arthashastra, its author Kautilya has one bit on the duties of an office called the “Superintendent of Infantry” and it includes: “Being ever mindful of the discipline which his army has to maintain not merely in camping and marching, but in the thick of battle, he shall designate the regiments [vyúha] by the names of trumpets, boards, banners, or flags.” In mythologies like the Mahabharata, flags are ubiquitous in battle. The website Dharma Dispatch, in an article on India’s ancient flags, has “a brief list of the warriors and heroes and their respec­tive flags listed by Sanjaya in the Drona Parva in an entire chapter.” Arjuna has “Kapidhvaja, the flag of Hanuman, meant to instil terror in the enemy’s heart”, Duryodhana has the “Naga or serpent flag studded with gold and gems”, Bhima has “Simhadhvaja or the lion emblem [whose] eyes were set in diamonds.”

Flags made an effortless transition into the age of nationalism. The introduction to the book Complete Flags of the World has this to say about its evolution: “In Europe, flags began with the Roman vexillum, a square flag used by Roman cavalry, from which the term ‘vexillology’—the study of flags—originated. In the Middle Ages, heraldry became important as a means of identifying kings and lords…With the growth of independent nation-states, flags have be­come more important in politics. Many newly-independent states chose flags based on the political parties that secured independence. Revolutionary movements usually have their own flags, and private and professional organizations are increas­ingly adopting flags.” An article in The Atlantic, ‘Where Do Flags Comes From’, traces the genesis of the modern flag and its design to the Age of Revolution, that led to France overthrowing its monarchy and the birth of the US: “The relatively simple red, white, and blue flags of the American and French republics were visually and functionally distinct from their predecessors [with the exception of the earlier tricolor of the Dutch Republic)… These new flags rep­resented the nation as an umbrella over a collective citizenry, not just the power and right of a ruling family. National flags were now streamlined symbols, easily recognizable and replicable. A sense of identity and a set of values could be invoked with a simple set of colored stripes and stars. The rise of nationalism and modernity led to industrial and social standardization: railroad track gauges and ammunition calibers, for example. The relative uniformity of national flags—the overwhelming majority of them are now rectangular, and most incorporate some sort of horizontal, vertical, or diagonal stripes or bars—has more to do with industrial modern­ism than it does with flag design.”

It was in this stream that India, as it began to shape itself during the freedom movement, took a dip too. It is somewhere in the first decade of the 20th century that a proto version of the current flag makes its appearance. In 1906, a flag with red, yellow, and green horizontal stripes with Vande Mataram written in the middle, was hoisted in Kolkata. About a decade later, a freedom fighter named Pingali Venkayya had become interested in researching flags to come up with a design for the independence movement. The Indian Express, in one of its explainers on the flag two years ago, wrote: “At the All India Congress Committee in Bezawada (now Vijayawada) in 1921, Venkayya again met Gandhi and proposed a basic design of the flag, consisting of two red and green bands to symbolise the two major communities, Hindus and Muslims. Gandhi arguably suggested adding a white band to represent peace and the rest of the communities living in India, and a spin­ning wheel to symbolise the progress of the country.”

Later, Congress decided that the colours of the flag shouldn’t represent communities; instead, it must be values that the coun­try would stand for. S Radhakrishnan, the philosopher who would become the first vice president of India, told the Constitu­ent Assembly about what the Tricolour seeks to convey, “Bhagwa, or the saffron colour, denotes renunciation or disinterestedness. Our leaders must be indifferent to material gains and dedicate themselves to their work. The white in the centre is light, the path of truth to guide our conduct. The green shows our relation to the soil, our relation to the plant life here on which all other life depends. The Ashoka wheel in the centre of the white is the wheel of the law of dharma. Truth or Satya, dharma, or virtue ought to be the controlling principles of all those who work under this flag. Again, the wheel denotes motion.”

BECAUSE THE FLAG REPRESENTS INDIA, IT IS sacred. If you do not treat it with adequate respect, then there is punishment. The Prevention of Insults to Na­tional Honour Act says about the flag: “Whoever in any public place or in any other place within public view burns, mutilates, defaces, defiles, disfigures, destroys, tramples upon or otherwise shows disrespect to or brings into contempt [whether by words, either spoken or written, or by acts] the Indian National Flag or the Constitution of India or any part thereof, shall be punished with imprisonment for a term which may extend to three years, or with fine, or with both.” It then lists all the many ways in which insult could be done in practice. If someone flies it at half-mast, makes it a part of any costume worn below the waist, embroiders or prints it on cushions, handkerchiefs, napkins, undergarments, or any dress material, uses it to drape vehicles, or even intention­ally hoists it upside down are all roads to prison.

There are also elaborate rituals around the flag and the man­ner in which it is treated is finely defined. Earlier, for instance, it could only be made out of khadi, and it had to be handspun. Last year, that was changed to include machine-made materials like polyester, silk, wool, and cotton. Another amendment that has just been passed makes it permissible to also fly it at night. In the past, this could only be done between sunrise and sunset.

As the Indian government celebrates Azadi Ka Amrit Mahot­sav, the 75th year of our Independence, one of its campaigns is to get everyone to hoist a flag in their own homes. This is one more progressive relaxation in the use of the flag by citizens. Earlier, the restrictions were severe and the experience of industrialist Naveen Jindal is an example of it. In 1992, when one of his factories had flown the flag, the administration said it was not allowed because private citizens could only do so on certain specified days. Jindal decided to go to court because lawyers he consulted told him that there was no such explicit prohibition in any law. The Flag Code, which did have the injunction, was not a law, just an executive instruction. The case did its slow journey in the judicial system until in 2001, the Supreme Court ruled in his favour. Due to this, in 2002, the government came out with a new Flag Code which states that there are no restrictions for anyone to fly the flag as long as it is in keeping with the laws that prevent improper use.

There were also other times earlier when people fell afoul of regulations governing the flag. A case filed in Kerala against some­one who didn’t lower the flag after 9.30PM was disposed of by the high court. Another case was from Tamil Nadu, where in a large public event to promote communal harmony, a cake was cut in which the icing was designed like the Tricolour. When newspa­pers reported on the event, this was noticed and led to a police case. The Madras High Court, however, held against punishment because there was no intent to insult the flag. Its order gave an in­teresting scenario to make the point: “For proper understanding, let us take a hypothetical case where there is widespread participa­tion in an Independence Day or Republic Day celebration. During such celebrations, the participants are provided with a national Flag to be worn by them. In reality, after the participants leave the venue on completion of the celebrations, they do not continue to possess this Flag forever, and it becomes part of any other waste paper. Will this mean that each participant has insulted the na­tional Flag, and should be proceeded against under Section 2 of the Act? The obvious answer is in the negative.”

The flag is the rallying point for a country to come together because it is the country. It is also the ideal country in the values it symbolises. In 1947, while moving the resolution to adopt the national flag in the Constituent Assembly, Jawaharlal Nehru had said this: “I remember and many in this House will remember how we looked up to this flag not only with pride and enthusiasm but with a tingling in our veins; also, how when we were some­times down and out, then again the sight of this flag gave us the courage to go on.” India might be a work in progress but so long as Indians continue to feel that tingle in their veins in the presence of the flag, the ideal is still the journey’s guide.