Effortlessly shuttling between romance and rage 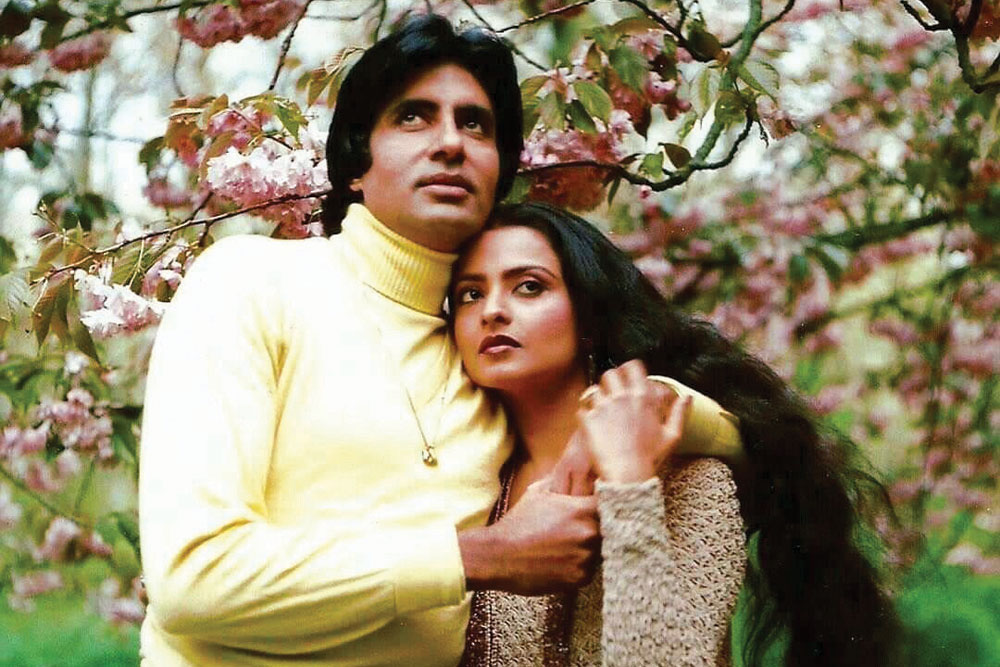 
IT’S HARD TO BELIEVE THAT AMITABH BACHCHAN is 80, five years older than independent India. This isn’t just be­cause he is active and looks much younger than his age but because for many of us, he remains the figure who defined the masala film of the 1970s and early 1980s.

Surprisingly, his talent wasn’t recognised immediately—he wasn’t selected for a post at All India Radio but only when he was in his early 30s. What was it that allowed his star image to crystal­lise at this time before the full supernova of his superstardom which has lasted 50 years, and is still ongoing?

Amitabh’s distinguished lineage as the son of Harivansh Rai and Teji Bachchan is well known, both figures with major liter­ary and cultural antecedents, as is the family’s close association with the Nehru-Gandhi clan in Allahabad (Prayagraj). Perhaps less is said about his Bengali connections, where he worked in Calcutta (Kolkata) from 1962 as a business executive in the British managing agency, Bird & Company, while continuing his interest in theatre and acting. Indeed, for many, one of his most popular roles in recent years was as a Bengali, Bhaskar Banerjee, in Piku (2014), reprising his name in one of his earliest films, Anand (1971).

However, Amitabh’s closest link to Bengal is through his wife and sometimes co-star, Jaya Bhaduri, who has had a dis­tinguished acting career, first as a teenager in Satyajit Ray’s Ma­hanagar (1963), then in the middle-class cinema of the 1970s, often remakes of Bengali films such as Uphaar (1971) and Kora Kagaz (1974), and her much-loved roles in Guddi (1971) and Mili (1975). She returned to the screen in the film of Mahasweta Devi’s Bengali novel Hazaar Chaurasi Ki Maa (1998), thereafter taking mostly small roles in Hindi movies.

Amitabh was the narrator in Mrinal Sen’s Bhuvan Shome (1969), a Hindi film funded by the Film Finance Corporation. This film is often said to be the first of a new wave of cinema called new or parallel cinema, closely associated with filmmak­ers like Shyam Benegal and Basu Chatterjee. It differed from the post-Nehruvian nation-building type of cinema, distinguished by its use of realism, in performance and settings.

Amitabh was also a key figure in the middle-brow Hindi cin­ema which evolved shortly afterward. This cinema referenced the middle class both in content as well as its audience. It was less challenging than art cinema, sharing some features of main­stream cinema, such as the use of melodrama and lip-synched playback songs, but it was underpinned by a more realistic aes­thetic and middle-class and upper-caste content. It was closely linked to Bengali cinema and literature from which it often drew narratives, even among non-Bengali directors, such as Gulzar, whose Mere Apne (1971) draws on Tapan Sinha’s Bengali film Apanjan (1968).

Hrishikesh Mukherjee (who was born 100 years ago) made many of the most loved Hindi films in this style and it was not surprising that he chose Amitabh Bachchan in his films, includ­ing two where Gulzar wrote memorable dialogues, Anand (1971) and Namak Haraam (1973), and which starred Rajesh Khanna, the leading actor of the day.

IN ANAND, AMITABH plays a Bengali poet and doctor, Dr Bhaskar Banerjee, who cannot cure his patient Anand (Rajesh Khanna) but learns how to live with joy in the midst of difficulty. Namak Haraam, inspired by Becket (1964) with Richard Burton and Peter O’Toole, is the story of class conflict, here between the son of the factory owner, Vijay (Amitabh), and the middle-class Somu (Rajesh Khanna) who becomes the workers’ spokesperson. When Vijay’s father has Somu killed, Vijay takes the blame.

Although Amitabh was the supporting actor in these films, many people noticed this brooding actor who often commanded the viewers’ attention. Amitabh followed these films with many other great successes in middle-class cinema, working in several Hrishikesh Mukherjee films, including some with Jaya such as Ab­himaan (1973) and Chupke Chupke (1975), a remake of a Bengali film.


However, it was Zanjeer (1973) which marked Amitabh as a leading hero of mainstream cinema. Amitabh plays a police inspector, Vijay, who is angered by the injustice and corrup­tion that swirls around him. He personally rescues lost souls from the street, including Sher Khan (Pran), who gives up his gambling dens to become an auto mechanic. He also saves Mala (Jaya) who sets out to become middle-class, learning English and how to be a housewife. Her romance with Vijay develops, and when she tries to talk to him about home furnishings, he explodes with rage about their nice house with its curtains closed to the evils unfolding outside.

Zanjeer was the first of many films in which Amitabh was Vi­jay or Jai. Often called the “Angry Young Man”, Vijay was all about getting revenge and self-respect. He was self-aware, cool and a fighter in the mould of Bruce Lee or Clint Eastwood. Vijay’s styl­ish dress and tall, lanky figure with an intense face able to com­municate emotion directly made him a mainstream hero, and Amitabh a superstar. Vijay, like many in real life, fought against the injustice he faced but, as his name (“Victor”) indicates, was victorious.

Sometimes, even though Vijay captured the moral high ground, he had to die because he had broken all social norms. In Sholay (1975), he had been a thief and wanted to set up a new home with a widow (played by Jaya, now Jaya Bachchan) and this was one transgression too far. In Deewaar (1975), he had done what was right for his family, in particular, for his mother, but had broken the law and there was no way back into society. In Kala Patthar (1979), his heroism atoned for his suspected cow­ardice and he could return to society while Mangal (Shatrughan Sinha), an escaped convict, had to die.

Vijay often had a second hero with him, an often gentler and more traditional hero, whether Shashi Kapoor or Rishi Kapoor. These happier and gentler characters offset Vijay’s anger and despair, although Amitabh in roles usually as Amit was also suc­cessful as a romantic hero.

Although Amitabh was a great performer of romantic and comic songs, in some films, notably Deewaar, he had few songs. Perhaps this was because his dialogues were so memorable and powerful, both in their content and his delivery. Guru Dutt as Vijay in Pyaasa (1957) and Suresh Sinha in Kaagaz Ke Phool (1959) conveyed anger with the world in Sahir Ludhianvi’s poetry but Vijay did so in brilliant dialogues, mostly by Salim-Javed.

The importance of the voice in Hindi cinema has often been overlooked but Amitabh’s ability to deliver these well-scripted dialogues has been exceptional. Whenever I have interviewed him in public, the audience wants to hear him recite dialogues from these films or his father’s poetry.

Amitabh has an exceptional voice which is often called baritone, although that is a Western term for a male singer in the mid-ranges (and Amitabh sings his own songs often in this range). I wonder if this deeper voice has different meanings and I think of Hemant Kumar/ Hemanta Mukherjee who sings in a deeper range, per­haps showing the wisdom and depth of feeling, not of a young man but of one beyond the first flush of youth.

Amitabh’s success began in these early years of the 1970s as his own talent and work combined with that of major directors, great writers, songs and stories. He is the superstar of the masala genre, where the hero sets out his moral vision as India emerges from its consensus of the Nehruvian era and its legacy to a time of social and political upheaval. Amitabh’s films remain some of the most loved in the history of cinema and he is an icon of Indian cinema, and indeed, of India itself.