From being gateways to gods to cleansing of sins, it has played a central role in religion and culture 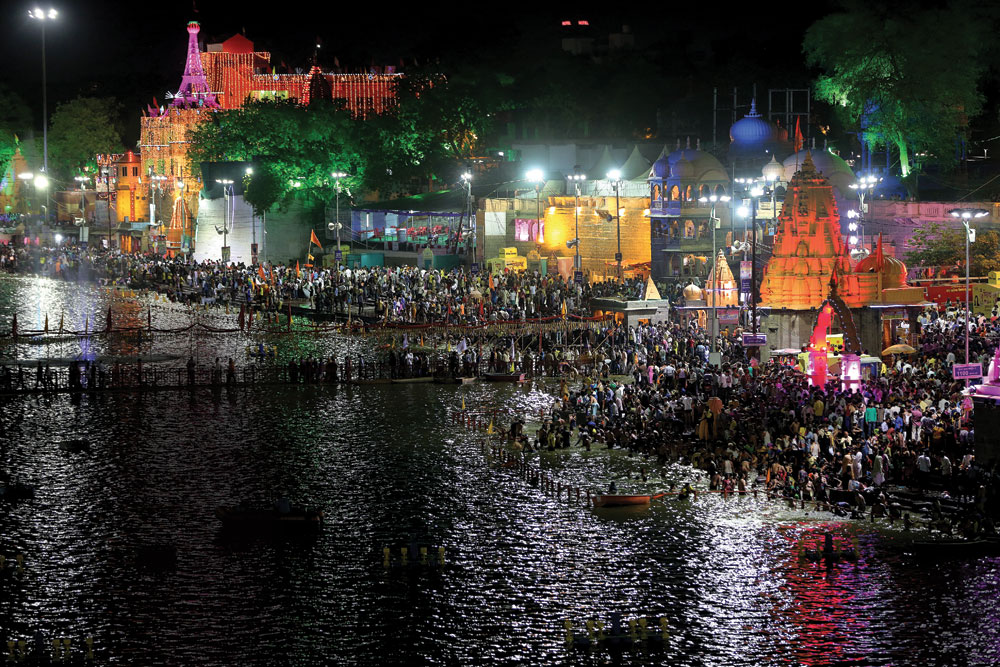 
The Kumbh Mela is arguably the biggest spectacle of Hinduism, a religion so loose and disconnected that it was hard to bring it under a common roof. The Mela, or Melas, was said to be incorporated as a tradition by Shankaracharya, perhaps in the 8th century CE. It is held on the banks of rivers every 12 years and the primary feature of it is the holy dip. This is not just for individual pilgrims alone who come to collect divine merits but also for the akharas, monastic groups, for whom the manic rush into the waters is also an exhibition of stature. James G Lochtefeld, in his essay ‘Getting in Line: The Kumbha Mela Festival Processions’ (which is a chapter in South Asian Religions on Display: Religious Processions in South Asia and in the Diaspora), rues the absence of any historical records of the festival that date to antiquity. However, he adds, there are records for different bathing festivals as a phenomenon in India. He writes: ‘Some were annual, such as Hardwar’s Baisakhi Mela and Prayag’s Magh Mela. Others were determined by Jupiter’s twelve-year cycle—Hardwar’s Kumbha Mela and Nasik’s Sinhastha Mela, whose differing charter myths clearly point to independent origins. Such festivals would have attracted ascetics as important religious occasions, but also as opportunities to display status, seek patronage, and conduct trade.’ The Kumbh is thus a clever attempt to bring a common thread to numerous similar festivals in furtherance of a larger plan—to turn disparate schools of Hinduism into a unified entity. That it has water as its central motif is not surprising.

Water is intimately connected to religion. There is, for example, the ritual of baptism in Christianity. But it hardly begins with Jesus Christ because he himself, as the New Testament says, was baptised by John the Baptist by immersion in the waters of the river Jordan. And that tradition itself might have a forerunner in Jewish practices. Ritual immersion is even now part of the ritual for anyone converting to be a Jew. In Water: A Spiritual History, Ian Bradley talks about how Taosim is the religion with the strongest attachment to water. He writes: ‘Here it is primarily valued for its symbolism and metaphorical message. Alan Watts, a leading 20th century expert on Chinese religion and philosophy, has called Taoism ‘the Watercourse Way’ because its two original exponents, Lao-tzu and Chuang-tzu, used the flow of water as its principal metaphor. In Taoism, water is seen not just as the source of life, the mysterious female base from which heaven and earth sprang, but as a metaphor for the Tao, or way of life itself, the flowing course of nature and the universe. Like the Tao, water has the character of quiet effortlessness and calm or agitated.’


In the book Bradley makes an analysis of all the ways in which water has been appropriated by religions. These include:

Water as where god stays. Among the examples he gives is the Koran which has a Surah that talks about Allah’s throne residing upon the waters, a conception based on waters in heaven above.

Water as a medium for human encounter with the divine. Because if gods stay on waters, then it is also a gateway to them. He writes: ‘For the Romans and Greeks, hot springs with their presiding deities were particularly appealing for this reason. Celtic mythology included lakes and rivers as being among the watery places where humans could commune with deities and as a result they became favourite sites along with wells and springs for votive offerings and sacrifices.’

Water as source of life which is why many religions have mythologies of fountains of youth and bestowments of immortality through water.

Water, also, as symbol of death. He gives the example of Greek mythology in which the newly dead are taken by the ferryman Charon ‘across a river that encircles the underworld and forms the boundary between Earth and Hades.’ The ferryman makes an appearance in Buddhism too where the Buddha himself is alluded to as such in taking people through the chain of life and death.

Water is also, writes Bradley, a feature of Paradise in many religions, a manifestation of the feminine, a mirror of life and afterlife, healing, cleansing and purifying, and more.

A later Mandala, the 10th one, has perhaps one of the most popular hymns of the Rig Veda, the Nasadiya Sukta, or the Creation Hymn. It speaks of the world being nothing but water in which rested existence only as potential. As AL Basham’s translation says: ‘At first there was only darkness wrapped in darkness. All this was only unillumined water. That One which came to be, enclosed in nothing, arose at last, born of the power of heat.’

Such early toying of water’s relationship with existence and manipulating it to curry divine favours would seep through time to the present. The Rig Veda is mainly a culture that looked at gods as limbs of nature to be appeased through hymns. The next stages of India’s spiritual consciousness, like the Upanishads, address water in different ways. The Chandogya Upanishad, for instance, exhorts the worship of water because it is everything that exists, even gods. The verse, as translated by Swami Lokeswarananda, says: ‘Water is certainly superior to food. That is why if there is no rain, people worry and think, ‘There will not be enough food.’ But if there is a good rainfall, they are happy, thinking, ‘There will be plenty of food.’ All these are water in different forms: the earth, the interspace, heaven, the mountains, gods and human beings, cattle and birds, creepers and trees, animals of prey, worms, insects, and ants. All these are water in different forms. Therefore worship water.’ In the Puranic age, the storytellers come up with fantastic metaphors about water’s influence. Such as, the Ganges getting trapped in the hair of Shiva who then deigns to open it a little allowing it to flow gently into the earth. Or, the Matsya avatar of Vishnu who lives in water. Almost every Hindu ritual has water playing a role. Like the rites after death where ashes have to be drifted into flowing waters and, before that, while the rituals are being performed, water being used while making oblations to ancestors and gods. Or, the sprinkling of water to the chant of mantras to sanctify an object.

Water also had an unsalutary role because of its association with purity. In a 2001 paper, ‘Hindu Mythology and an Unequal Social Order in India’, Deepa Joshi and Ben Fawcett looked at how it is still used to stratify caste inequalities. For their study, they looked at a remote village called Chinu in the Kumaon hills and observed the water behaviour of caste groups there. Their paper noted: ‘The concept of purity exists as a theme, which is central to local life, almost in the same way as defined by Manu. This concept is used to exclude the polluted from water sources, which are considered sacred. In death and birth for the family, and menstruation and childbirth for women, water from the Naulas is mixed with water from the holy river Ganga, if available, and is sprinkled on the polluted to purify them before they are re-integrated into the social system and also before they can actually access the Naulas themselves. Dalits, here as elsewhere, are considered polluted and capable of polluting. When the ‘upper castes’ come in close contact with Dalits they are purified by the sprinkling of Naula water, a practice known locally as Chod. After Dalits leave an ‘upper caste’ household, the place where they sat in the courtyard is washed or sprinkled with water, or sometimes with a mixture of cow-dung, also identified as pure, and water.’

Caste discrimination is fading away in the modern age but Chinu’s example is representative of water’s use and access to foment caste subjugation for thousands of years in India. Such practices have become exceptions now but the role of water continues to remain central in other cultural and religious forms. In festivals, which have become very popular and publicly celebrated in recent times, like Ganesh Chaturthi and Durga Puja, it is in the waters that the God and Goddess are immersed. It signifies the deities being invited, staying for a brief period and then returning to their abode. Water is the medium through which the departure happens. The Ganges continues to be venerated as having the power to cleanse sins following a dip in her waters. It is from the auspiciousness of its waters that Kashi, India’s oldest city, also gets its halo as a portal through which the dead can get rid of the chains that keep them making repeated births. The waters there are polluted beyond measure now but it has not made a dent to the faith that remains crystal clear.