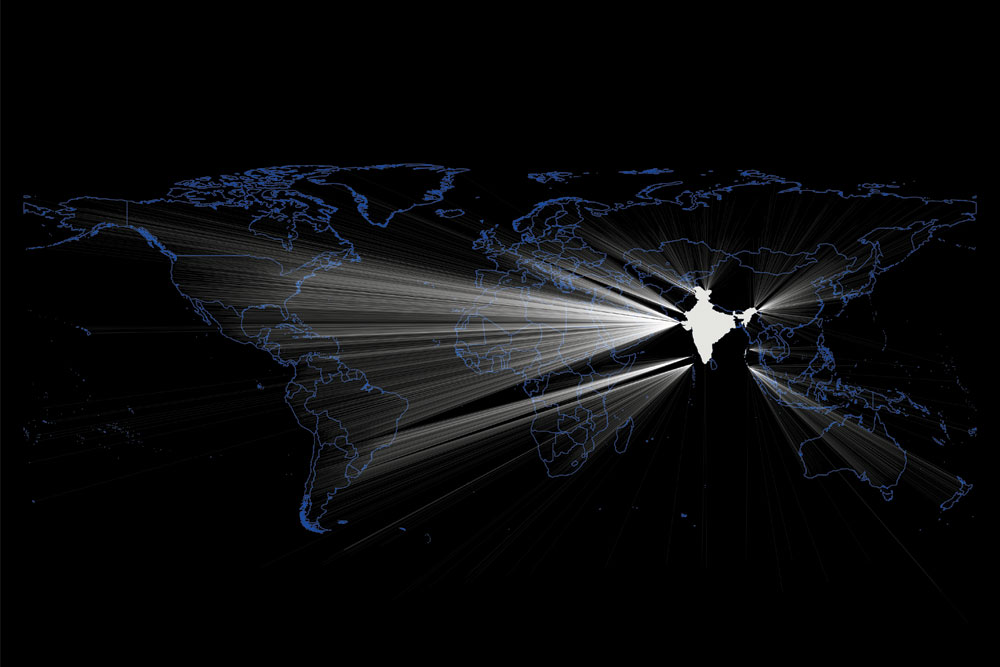 
IN THIS FAST-EVOLVING knowledge century, countries that own and control intellectual property, the means of its production, distribution and dissemination are the ones that will enjoy an enormous competitive advantage in furthering their strategic foreign policy interests. The Russia-Ukraine war has demonstrated how software-driven systems—banking to payments to defence—have been weaponised. Countries around the world are therefore rethinking their approaches to security, sovereignty and dependence on technology providers over whom they have no control. It is thus critical to harness intellectual capital, that is, knowhow, knowwhat, design principles, protocols, frameworks, and implementation capabilities.

The developed world has for long dominated the discourse because of its investments in the ownership, production and distribution of intellectual capital-based products and services. This was achieved through the creation and ownership of:

– Standards: These ensured compliance and adherence by all;
– Institutions: These drive rules of engagement, decision-making and enforcement; and
– Markets: These provide economic incentives for participation.

In today’s world, software intellectual capital (SIC) is pervasive. From cars to rockets, from agriculture to water, from healthcare to power, from education to internet infrastructure, from telecom to banking, from retail to manufacturing, from defence to security to space, it is SIC that is driving these industries, their products and services. China is making rapid strides through enormous investments in SIC via its digital initiatives, education, research and development (R&D), and other programmes.

With over 65,000 startups, 100 unicorns and over $38 billion in venture capital funding in 2021, India is a fast-growing global technology startup hub with over six lakh jobs created. India’s SaaS (Software as a Service) industry is projected to be a $1 trillion opportunity while Indian information technology (IT) services companies generate over $200 billion in revenues and employ about four million people. Yet, Indian SIC is yet to make its mark globally although, ironically, the only industry for which India is globally recognised and respected is software development and services.

India’s pioneering software platforms-based initiatives, from Aadhaar to the Unified Payments Interface (UPI)/payments, from Direct Benefit Transfer (DBT) to credit, from health to education, from the Goods and Services Tax (GST) to commerce, and a host of other initiatives, are all transforming its economic and governance architecture. The so-called India Stack has become the “Sushasan” (good governance) stack for various countries—developed and developing—for enabling the delivery of speedy, low-cost, largescale, inclusive, secure, open, consent-based solutions to a diverse user base with diverse usage environments. With over 5.95 billion transactions totalling over `10.4 trillion in May 2022 alone, UPI is a world leader in payment system interfaces in just six years since its launch. So much so that Google recommended the adoption of a UPI-like payment system to the US Federal Reserve.

UPI and RuPay are being implemented in India’s immediate and larger neighbourhood in countries like the United Arab Emirates (UAE), Nepal and Singapore.

With “Legal Identity” a United Nations (UN) Sustainable Development Goal (SDG), there is enormous interest and a lot activity among countries to implement digital governance solutions for their societal transformation. The World Bank is driving an Identity for Development (ID4D) initiative and Identification for Africa (ID4Africa) while the UN High-level Panel on Digital Cooperation has recommended that the Indian experience be studied. The Bank for International Settlements (BIS) has published case studies from the Indian experience.

IIT Bangalore houses the MOSIP (Modular Open-Source Identification Platform) project which is an open-source ID platform currently being deployed in Morocco and the Philippines with over 80 million registrations. Several countries are in various stages of discussion with regard to deploying MOSIP for addressing their governance-related matters, including offering benefits, financial inclusion and other services to their citizens.

With the West’s traditional dominance of SIC under pressure from China’s assertive foreign policy and increasing investments in SIC, the current geopolitical environment, especially in developing countries, is appropriate for India to deploy its own SIC in furtherance of its strategic objectives.

With fears of digital colonisation, data sovereignty, security and privacy, countries are becoming wary of becoming dependent on private companies and other countries. Countries like Denmark have appointed tech ambassadors while Slovakia, France and Germany have digital diplomats to further their interests in the new digitally driven world.

India’s unique approach in treating its digital platforms and protocols as societal digital public goods (DPG) and digital public infrastructure (DPI), under the rule of law, coupled with its being seen as a non-hegemonic power, ensures New Delhi is well suited to address the concerns of other countries. The conceptualisation of these DPGs and DPIs has trust, privacy, empowerment, security, as well as individual and community rights embedded in them, not just through law but also through technology. These ensure that states have access to a global digital commons and that their offerings are agnostic towards technology and country providers. The unique and holistic Indian approach—technology, legal, policy and business model—to understanding, developing and deploying these nationwide innovative digital public platforms is something that countries like France, Australia, Japan, Morocco, the Philippines and many others are keenly interested in. Most countries lack the SIC capacity—including talent in numbers and scope—that India has in this regard.

India, therefore, has the opportunity to offer its unique SIC to a large and fast-emerging set of economies with important benefits accruing to all. India’s digital platforms-led expertise, coupled with its technology startups and IT services capabilities, can be an incredibly potent arrowhead for its foreign policy. This ‘soft’ approach can be contrasted sharply with China’s ‘hard’ infrastructure as foreign policy.


India stack has become the Sushasan stack for various countries for enabling the delivery of speedy, low-cost, largescale, inclusive, secure, open, consent-based solutions to a diverse user base

The advantages to India are several. First of all, SIC would provide India geopolitical leverage through technological expertise guidance on digital governance. Second, it would generate economic benefits for India and Indian companies as knowledge and implementation partners. Integrating with existing training and eco-development aid programmes could also be considered. Third, in delivering cognitive capital as an international technology standard, India would become a knowledge provider and key arbiter of global standards. For example, UPI could be a global standard. Last, software is a high value-added industry and environmentally friendly.

India, however, will need to pay heed to a few things that ought to be done. There are five main recommendations. First, an awareness has to be generated of India’s SIC capabilities within government, especially in the Ministry of External Affairs (MEA), that is, for Indian missions abroad. MEA needs to focus on India’s digital platforms as a means of furthering how other countries benefit from it. Agreements with other nations should have this as an item on offer.

Second is the formation of international bodies for establishing and furthering standards. The role of Indian institutions like the National Payments Corporation of India (NPCI) can be important in this regard.

Third, Indian SIC has to be included in existing ITEC (the Indian Technical and Economic Cooperation Programme) agreements, credit lines and other programmes.

Fourth comes the setting up of, say, centres for digital governance, payments, and citizen empowerment overseas for other countries to experience the ease and power of India’s platforms in a safe and secure manner. For example, Estonia has an e-Estonia briefing centre to “inspire global policy makers, leaders, corporate executives, investors and international media with the success story of e-Estonia and build links to leading IT service providers”. As a global pioneer in DPG and DPI, a world leader in IT services, and being one of the world’s leading technology startup hubs, India could provide training, awareness, partnerships and support for developing comprehensive solutions to the problems of governance, across sectors, to most countries around the world.

And finally, it is imperative that for a strong international presence, the domestic market, regulatory and market-making institutions, and standards, be made deep and wide with multiple strong entities operating. This would require enhancing the Ease of Doing Digital Business so that Indian companies and society become more digitally aware and capable, and then those software companies stay in India rather than migrate to other jurisdictions, list themselves on Indian stock exchanges, and raise more and more capital from within India to grow and become global players.