A learned enemy is superior to an ignorant friend 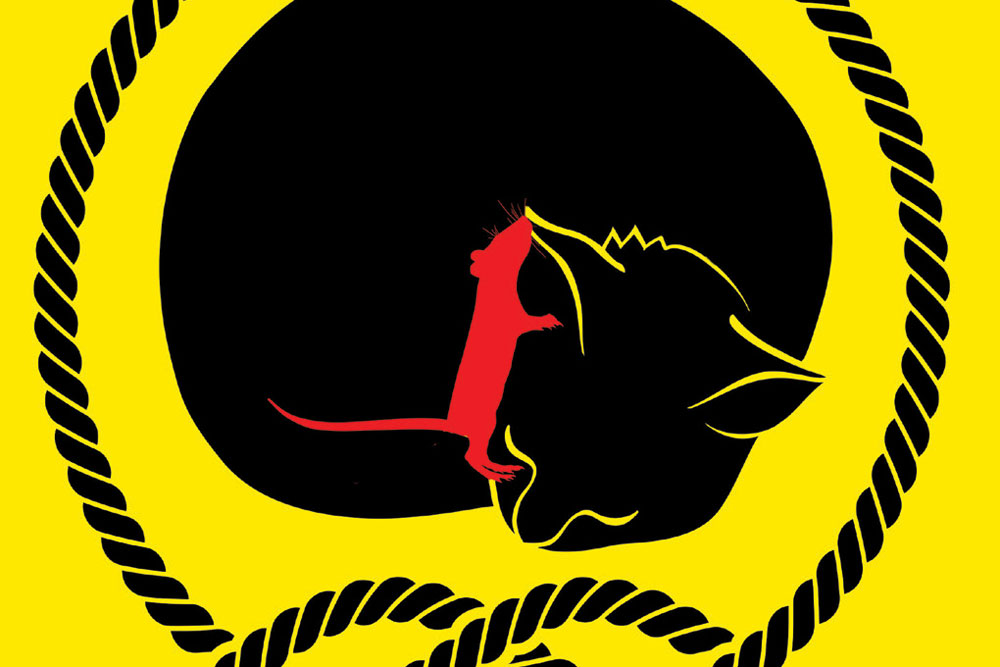 
IN THE COURSE of instructing Yudhishthira, this is a story Bhishma told him. This is a story from the Mahabharata, although it sounds like one from Panchatantra or Hitopadesha.

In a great forest, there was an extremely large banyan tree. It was covered with creepers and was frequented by large numbers of diverse birds. Its trunks were like clouds and it offered cool and pleasant shade. Many predatory animals lived there, with enmity towards each other. There was a hole at the root of the tree and an immensely wise rat named Palita lived there. A cat named Lomasha happily dwelt in the branches, destroying the lives of the birds. Every day, when the sun went down, a Chandala arrived there. He would spread out nets made of sinews there. Having done this, he would return cheerfully to his home and sleep, waiting for night to be over and for it to be morning. Every night, a large number of animals were always killed there. On one occasion, the cat was careless and got trapped. At that time, the immensely wise Palita got to know that the enemy, who was always trying to kill it, had got trapped. It wandered around, without any fear at all. As it roamed around in that forest, it looked for some food and saw the meat left by the Chandala as bait. It climbed up there and began to devour the meat. It laughed, as it stood above the enemy who had got trapped. While it was engaged with the meat, it happened to look up and saw that another enemy had arrived, terrible in appearance. This was an agile mongoose named Harika and its eyes were coppery red. Having smelt the rat, it had swiftly arrived there. It stood on the ground and raised its face upwards, licking its lips at the prospect of a meal. The rat saw another enemy on a branch, one that lived in a hole in the trunk. This was an owl named Chandraka. Its beak was sharp and it roamed around during the night. It was within the reach of both the mongoose and the owl.

In that situation, confronted with that great danger, Palita began to think. ‘Death has presented itself and this is a catastrophe. There is danger from every side. What should I do? There are many difficulties and there is one chance in one hundred of my remaining alive. There is no doubt that disaster confronts me from every direction. If I descend on the ground, the mongoose will violently seize me. If I remain here, the owl will get me, or the cat, after it has severed the noose. However, a person who is wise should not be confused. As long as I breathe, I must try to remain alive. Those who are intelligent and wise are not scared when they face a danger or a great destruction of prosperity. At the moment, I do not see any means of attaining the objective other than the cat. That animal confronts a disaster and I can do him great service. How else can I remain alive now? There are three enemies who are after me. Therefore, I must resort to my enemy, the cat. I have already made up my mind about how I am going to deceive these enemies. The worst of my enemies now faces this worst of hardships. If it is possible, perhaps this fool can be made to understand where his best interests lie. Given this difficulty, perhaps it may be made to have an alliance with me. If one is beset by enemies and if one wishes to save one’s life in the midst of a hardship, the preceptors have said that one must have an alliance with a stronger person. A learned enemy is superior to a stupid friend. The prospect of my remaining alive is based on my enemy, the cat. Let me explain to it the means whereby it can save itself. Perhaps this enemy of mine is intelligent.’

The rat spoke these conciliatory words to the cat. ‘O cat! Are you still alive? I am speaking these affectionate words to you. I wish that you should remain alive. That is best for both of us. O amiable one! You will remain alive, as you used to do earlier. I will save you and even give up my life for your sake. A way to save ourselves completely has presented itself before me. Through that, I am capable of saving you and also ensuring the best for me. Use your intelligence to reflect about the means I will suggest. This is good for you, good for me, and best for both of us. The mongoose and the owl are wicked in their intelligence. O cat! As long as they do not attack me, I am fine. But the mongoose and the owl with the darting eyes are both glancing towards me. As I am clinging to the branch of this tree, I am becoming extremely anxious. If one treads seven steps together, virtuous people become friends. You are learned. We have lived together. I will act so that you have no fear from death. O cat! Without me, you are incapable of severing this noose. If you do not injure me, I will sever this noose. You live at the top of the tree and I dwell at the root. Both of us have lived in this tree for a long time. All this is known to you. Someone who does not trust anyone and someone who trusts a person who should not be trusted—the learned say that these two are always anxious in their minds and should not be praised. Let the friendship between us increase and let this be an agreement between two virtuous ones. The learned do not praise something that is done after the time for it is over. I desire that you should remain alive. You desire that I should remain alive. If someone wishes to cross a deep and great river with a piece of wood, the wood takes him across, and he takes the wood across too. If we act together in this way, our safety will be certain. I will save you and you will save me.’


If one is beset by enemies and if one wishes to save one’s life in the midst of a hardship, one must have an alliance with a stronger person

Having said this, Palita was impatient because time was being lost and it looked on, hoping that the reasoning would be accepted. Hearing these words, the cat, the learned enemy, replied in words that were full of reasoning. It was intelligent and could speak well. Looking towards its own situation, it honoured the rat and applauded its speech. Its teeth and claws were sharp and its eyes were like lapis lazuli. Lomasha, the cat, gently looked towards the rat and said, ‘O amiable one! I am delighted that you desire I should remain alive. If you know what is desirable, do it without any reflection. I am gravely afflicted, but you are in a situation that is direr still. Since both of us face difficulties, let us have an alliance. There is no need to think. The time has come. Let us act so that we can ensure our success. If you free me from this difficulty, I will not forget what you have done. I have cast aside my pride and have become devoted to you. I will follow your instructions. I have sought refuge with you.’

When the cat said this, Palita spoke again. ‘The generous words that you have spoken are not unusual for someone in your situation. You know my ways. Listen to my words, which are for your benefit. The mongoose is giving me great fear and I will crouch under your body. Save me and do not kill me. I am capable of saving you. Also save me from the owl. That inferior one is also seeking to get at me. O friend! I will sever your noose. I am swearing this truthfully.’

Welcoming Palita, the cat, tied to it by a bond of friendship, thought about it patiently. Happily, it said, ‘Come swiftly. You are a friend whom I love like my own life. O wise one! Through your favours, I will quickly get my life back. I will do whatever I can for you. I will do whatever you order me to. O friend! We must have an alliance. Once I have been freed from this danger, with my large number of friends and relatives, I will do all the deeds that are for your benefit and bring you pleasure. Once I have been freed from this hardship, I will become yours. I will do whatever brings you pleasure. I am capable of paying you back.’

Having persuaded the cat that this was in its own interests, the rat was reassured that the objective could indeed be achieved. Reassured by the intelligent cat, the rat fearlessly crouched under the cat’s chest, as if it was in the lap of a father or a mother. The rat was curled up under the cat’s body. On seeing this, the mongoose and the owl lost all hope and returned to their homes. Palita was curled up there.