The Summer of Hope 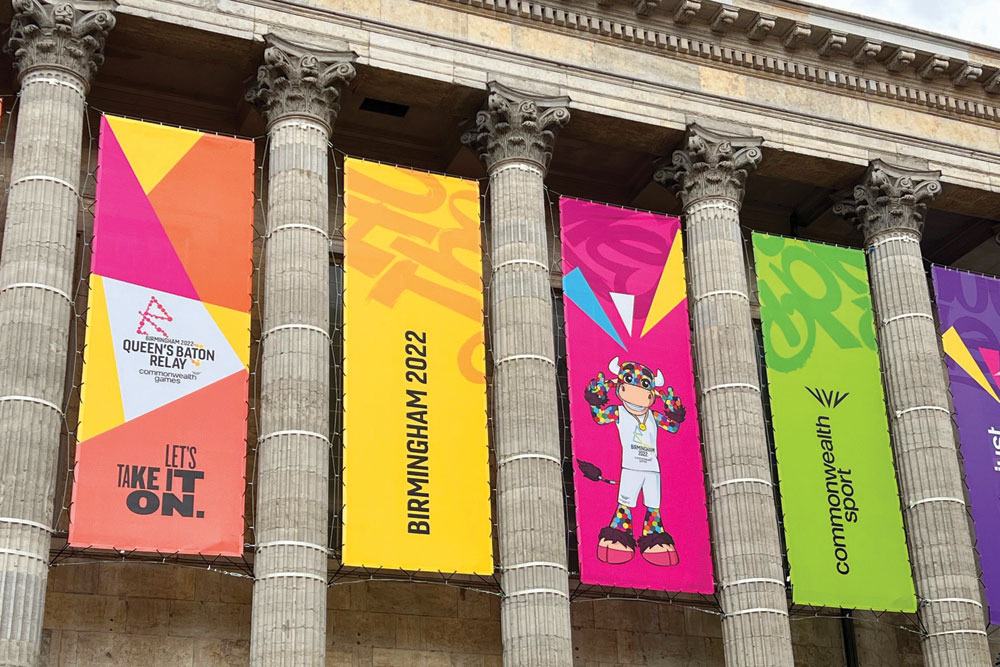 
AS THE TRAIN arrives at the Birmingham New Street Station, the first thing that greets you is the branding. A completely refurbished station, Birmingham is all set to welcome the 72 countries of the Commonwealth come July. Signs of “Be Bold”, ‘BHAM” and “CWG 2022” are almost everywhere at the station. A huge number of new restaurants, new zones to avoid queues, and multiple assistance desks greet visitors as they step into the city, which is almost ready for the Commonwealth Games (CWG) with 50 days to go.

“Had you come at the end of June, in fact July 1, you would have seen the new tramlines in operation. There is a direct link between the station and the Games Village, which is located close to the airport. The tramline gets you straight into the city centre and will make a major difference to the transport system once the Games are over,” says one of the volunteers.

And as you walk out of the New Street Station and turn right into the Bullring Shopping Mall, the first shop that will attract your attention is the CWG 2022 Official Merchandise Store. Beautifully decorated with “Perry” the mascot all over it, the shop has a good range of products for kids and adults. And all through June and July activities are planned to engage the community. “There is a lot of excitement in Birmingham about the Games. Fifty thousand men, women and children had applied to become volunteers and out of them 25,000 were called for an interview. Finally, 13,000 were selected,” says Debbie Murray, the store manager.

“So are the people of the city not averse to the massive expenses the Games bring in their wake?” I asked her.

“You see expenses are always an issue. But with Covid under control we expect a lot of business to happen during the CWG. Hotels will be full, retail will take off once again, restaurants will do brisk business and most importantly people can come out and have some downtime during the summer. The most important thing that has changed the perception towards the Games is the doing away with the mask mandate. We were all scared what would happen if crowds weren’t allowed. And if masks were made mandatory. We did not want the Games to be held without people in the stands. Now with full capacity allowed and no mask mandate, it will be the first coming out party post-Covid. So everyone is actually excited about the games,” she says.


A tour of Birmingham and a visit to the Games sites gets you closer to reality. Some of the stadiums aren’t fully ready yet and a lot of construction is still on in the city. Having said that, nothing is too far from completion, or way behind schedule. While most of the events will be held in Birmingham, some will also be held in Coventry, Solihull and the like. And that’s what makes these Games more interesting. They are not Birmingham’s Games in that sense. Rather, they are England’s Games with the entire region being made a part of the festivities. “Just like in London in 2012, where the East End was developed during the Olympics, in Birmingham the relatively poorer areas of the city will receive a major facelift during the Games. That’s what will help the people of the city in the long run,” says Kaushal Bharvada who lives in Birmingham and specialises in graphic designs and signage and whose company has done a lot of work for the London Underground network.

“The very perception of Birmingham is changing because of the Games. It was always like Birmingham had little to offer to tourists. Now it’s different. The city has character in the new Birmingham. There are a number of things in the city that attract tourists and add to the city’s charm,” says another young volunteer who has moved to the city to work for the Games.

The same excitement is evident among the Indian athletes. With the Asian Games cancelled, almost every Indian athlete is now focused on CWG. “Hum 2018 Commonwealth Games mein fourth aye the. Is baar hume medal chahiye. Tokyo ke baad ummid bhi kafi hai aur logo ka hum se yehi maang hai,” says Gurjit Kaur, the drag flick specialist of the Indian women’s hockey team. Her thoughts find support in the words of Savita Punia, who played a stellar role in India’s Tokyo campaign. “We don’t have a Commonwealth Games medal yet. Our seniors have it and make no mistake we want it badly. More than any other tournament these multi-discipline events are special because here you play for India. You know that a lot of your people are watching and cheering for you. And in Birmingham a lot of Indians are expected to come and support us, which will add to the occasion,” says Savita.

They are not Birmingham’s games. rather, they are England’s games with the entire region being made a part of the festivities. The same excitement is evident among the Indian athletes. With the Asian Games cancelled, almost every Indian athlete is now focused on CWG. Strong crowd support is something the players will have to come to terms with once again post-Covid

Strong crowd support is something the players will have to come to terms with once again post-Covid. And this is something they are very much conscious of. In fact, pre-Covid crowds were a part of sport that was almost taken for granted. Then with almost two years of the pandemic, players were forced to play in empty stadiums with no spectators in the stands. Tokyo was also without crowds. “We are now used to playing in empty stadiums. So the Commonwealth Games will be different. It will be a different sort of pressure and it will be on us to use this support to our advantage,” says Harmanpreet Singh of the Indian men’s hockey team.

“With the Thomas Cup win there will be a lot of expectations. It is the first time we have won gold and the way the win was celebrated you realise how much people are following the sport back home in India. All of them will follow us during CWG and it will be important to do well for that will mean the sport will gain further momentum,” says Chirag Shetty whose partnership with Satwiksairaj Rankireddy will be key to India doing well in badminton.

“We know Birmingham well. We have played a lot of All England competitions at the same venue. We know the courts will be slow and the shuttles will come slower at us. For the first few days it will be about adjusting to the pace and then we should be good to go. We will try to use the crowds to push us further and do well for India,” says Satwik.

A good CWG for India will mean that the Tokyo gains have been consolidated. And a good Games for Birmingham will mean the city is gradually emerging victorious from the throes of Covid. With just over a month-and-a-half to go, there is reason to be cautiously optimistic.