Behind the vicious circle of suffering is the desire for possession 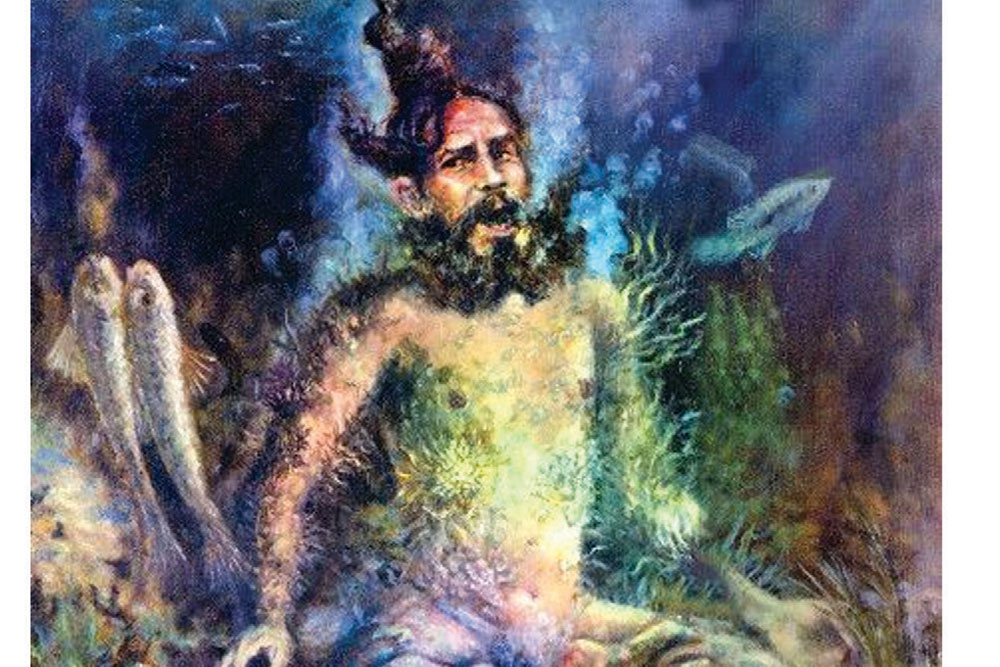 THIS STORY OF Soubhari is from the Vishnu Purana.

There was a maharshi named Soubhari. He resided inside the water for 12 years, performing austerities. A king of fish resided inside the water. His name was Sammada. He was large in size and he had many offspring. He would swim around day and night, surrounded by his sons, sons of sons and sons of daughters, behind him, in front of him, along his sides and on top of his flanks, head and tail. The rishi saw how he was delighted when his offspring touched him and tugged at him and was distracted. Every day, Soubhari’s concentration in meditation was disturbed. He saw the fish and thought, ‘How wonderful is someone like this. Though born as a different species, he is finding pleasure with his sons, sons of sons and sons of daughters. He has triggered a similar desire in me. I too wish to sport with my beloved sons in this way.’ He emerged from the water and made up his mind to search for a woman, so that he could have offspring.

He went to King Mandhata. Hearing that he had come, the king immediately arose from his seat. He honoured him properly, with arghya and other things. When he had taken a seat, Soubhari said, ‘O king! Since I have made up my mind, please bestow one of your daughters on me. Please do not rebuff my affection. If someone asks something of a person belonging to the lineage of Kakutstha, he does not leave refused. O Mandhata! There are other kings on earth who have had daughters born to them. You belong to the praised lineage of Ikshvaku, who are firm in their vows. It is not their practice to refuse someone who asks for something. You have 50 daughters. Give me one of them.’ Hearing the rishi’s words, the king looked at his body. Because of old age, the rishi’s body had decayed. On the other hand, if he refused, he was scared that he might suffer on account of a curse. Terrified, he remained in that state for some time, his face cast downwards. Soubhari said, ‘O king! What are you thinking about? I have not asked for anything that is excessive. You should certainly bestow your daughter on me.’ The king was scared that the illustrious one would curse him. Therefore, he spoke humbly. The king replied, ‘O illustrious one! It is the practice in our lineage that a maiden makes her desired choice from among noble grooms. Your desire is not yet known to my daughters. Until they know, I do not know what I should do. That is the reason I was thinking.’ The sage understood. He thought, ‘This is a technique to refuse me. He is of the view that I am an old man, with no appeal for women. Which daughter will accept me?’ Having thought, he replied to Mandhata. ‘Since that is your recommended way, let a eunuch take me to the inner quarters, where your daughters are. If any of your daughters desire me, I will marry her. Otherwise, I will desist.’

Mandhata was scared that the sage might curse him. Hence, he instructed a eunuch to take him to the inner quarters, where the daughters were. When he entered the inner quarters, the rishi assumed a handsome form, surpassing all siddhas and gandharvas. Entering the inner quarters, the eunuch spoke to the daughters. ‘Your father, the great king, has this instruction. This brahmarshi has come for a maiden. The king has promised that if any of his daughters chooses the illustrious one, he will bestow her on him.’ Hearing this, all the daughters were filled with love. They were like female elephants striving for the leader of the herd. Each said, ‘I will choose the rishi.’ Each told her sisters, ‘I have chosen him. He is not appropriate for you. Choose someone else. The creator has created him as my husband. I have also been created for him. Go away. Since I have chosen him first, I will accept him. Why are you creating an impediment?’ A conflict arose amongst the daughters, as each said, ‘Mine. Mine.’ The person in charge of the inner quarters went and reported what had happened. The king exclaimed, ‘What is this? What will I do now? Why did I say that about the practice in my lineage?’ Reluctantly, the king agreed that the maharshi should marry all his daughters. He married all the daughters and brought them to his hermitage.


As time passed, Sage Soubhari’s desires also increased. He thought, ‘what delusion is this! There is no end to my wishes. They only increase. When a present wish is satisfied, a new desire starts to sprout’

Vishvakarma is the creator of all works of artisanship. Having summoned him, the sage instructed him to construct a separate palace for each of the maidens. There were water bodies, resonant with the sounds of swans, ducks and other aquatic birds. There were excellent cushions, beds, garments and other objects. Vishvakarma did as he had been instructed. There were supplies of excellent food, drinks and objects of pleasure, accompanied by servants. With these supplies, the daughters fed and welcomed those who came.

On one occasion, the king’s heart was attracted by love for his daughters. He wondered whether they were happy or unhappy. He arrived at the maharshi’s hermitage. He saw a garland of palaces made out of crystals, as radiant as the rays of the sun. He entered one of these palaces and embraced his daughter. He took his seat. Because of his love and delight, there were drops of tears in his eyes. The father asked the daughter, ‘O child! Are you happy here? Is there the slightest bit of unhappiness? Does the maharshi treat you with affection? Or do you remember the home with me?’ The daughter replied, ‘O father! Look at the enchanting palace here. There are beautiful groves. There are food items, unguents, garments, ornaments and objects of pleasure that are pleasing to the mind. There are soft beds and seats. There is every kind of affluence in my household. Therefore, why should I remember my place of birth? Through your favours, I have obtained everything wonderful. However, there is one reason for me to be miserable. The maharshi, my husband, never leaves me. His great love is only for me. He does not approach any of my other sisters. I am therefore extremely sad on account of my sisters.’ Having been told the reason for her misery, he went to a second palace. He embraced this daughter. Once he was seated, he asked about her welfare. She also told him that her palace possessed every kind of object of pleasure and happiness. However, she had only reason for unhappiness. The sage was devoted only to her and neglected all her other sisters. In every palace that the king entered and asked his daughter, the daughter told him exactly this. He approached Soubhari, who was seated alone. He honoured him and said, ‘O illustrious one! I have witnessed the powers of your great siddhi. I have not seen these kinds of powers in anyone else. These are the fruits of your austerities.’ He worshipped the rishi and spent some time with him.

Mandhata then returned to his own city. After some time, the princesses gave birth to 150 sons. Every day, Soubhari’s love for them increased and his heart was overwhelmed with a sense of ‘mine’. ‘These are my descendants. Their conversation is charming. They will learn to walk. They will attain youth. They will marry and I will see their sons. Seeing these grandsons and their sons, every day, all my wishes will be met.’ In this way, as time passed, his desires also increased. He thought, ‘What delusion is this! There is no end to my wishes. They only increase. When a present wish is satisfied, a new desire starts to sprout. They started to walk. They attained youth. They got wives. They had sons. I have seen the sons of my sons. When I saw their sons, another wish surfaced. I have now realised that, right up to death, there is no end to desires. I dwelt inside the water, devoting myself to meditation. That fish was no friend of mine. Because of association with him, everything has been destroyed. The outcome of that association was my getting married. The consequence of marriage was these desires. There was misery because of the birth of one single body. But now, 150 bodies have resulted. This extension of great misery is because of marriage and the root cause is the sense of ‘mine’. Remaining submerged in water, I accumulated a store of austerities. That store of austerities was first destroyed by association with the fish and has been further destroyed by love for my sons. I will again strive to extinguish those sins, so that I do not suffer from the miseries people face.’ Thus, Soubhari fixed his atman in the supreme Atman. He gave up his sons, home, possessions and everything else. With his wives, he entered the forest.

The Force of Destiny

The Book of Overcoming

A Road Map for the Ruler

For posterity, he remains a subcontinental giant who bestrode the global stage

Because teamwork is central to Hindu nationalism