How to build a sporting powerhouse 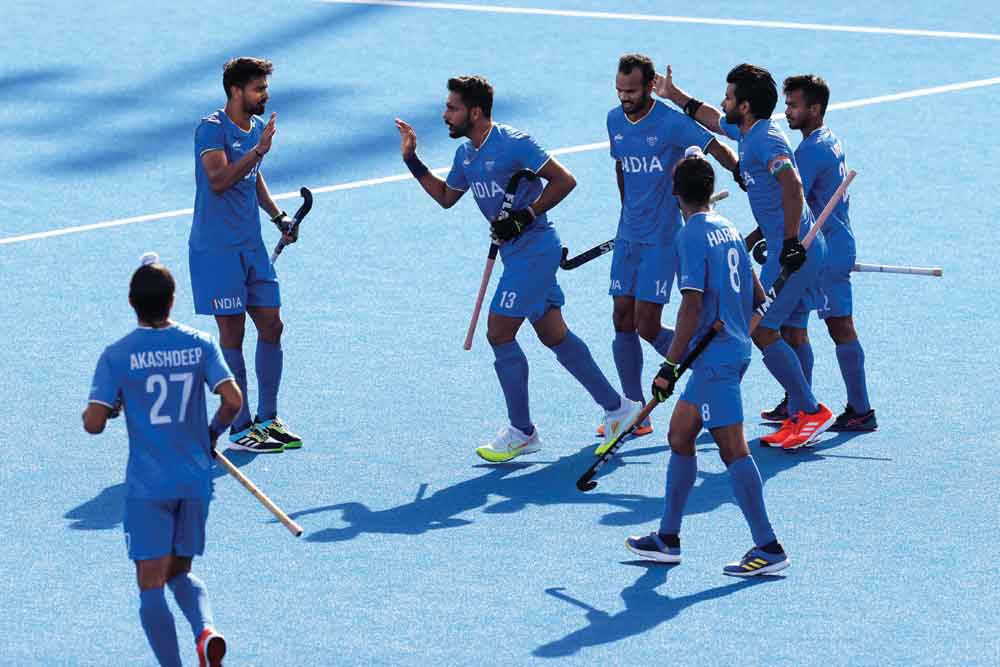 The Indian hockey team in the match against England at CWG 2022 (Photos: Getty Images)


ALL YOU NEED to do is go to the hotel lobby. And yes, you don’t need masks here in Birmingham at the moment. While it is better to still wear them in indoor settings, it isn’t mandatory. In the lobby you will inevitably see champions from across disciplines sitting around and chatting. Kieren Perkins, one of the legends of Australian swimming and now head of Swimming Australia, is one of them. And if you just walk out of the hotel and get to the Centenary Square you can be sure of bumping into current and former athletes who are all queuing up in front of the mega store to pick up their share of games merchandise. And now with the Raging Bull, the star of the Opening Ceremony stationed at the square, a trip is almost a must for everyone here in Birmingham for the Commonwealth Games (CWG). Be it Isa Guha or Colin Jackson, you will always see the area buzzing.

Just the day after we reached Birmingham, we decided to try out some local Indian cuisine at the Mailbox, a shopping mall right in the heart of the city. Indico Street had come recommended and it is just a five-minute walk from the Hyatt Regency where we are staying, making things that much easier. Just as we turned to get to the Mailbox we saw a bunch of Australian women athletes walking towards us. There were five of them and at that point were about 50-60 metres away. This is a pattern during multi-discipline events and none of us really paid attention to any of them until they were just about 10 metres from us.


Once they were close it was a pleasant surprise to see Ellyse Perry, Tahlia McGrath, Ashleigh Gardner and other Australian cricketers walking towards us. None of them had masks on and it seemed routine. No one bothered them with requests and it was all back to how mega events had been in the past when there was no Covid.

Seeing them go past, my mind went back to the London Olympics of 2012 here in England and to a day at Wimbledon when the Olympic tennis competitions were held. I had queued up to watch the Indian pair of Mahesh Bhupathi and Rohan Bopanna and, just as I was going through security, I could hear a murmur. Curiosity got the better of me and I turned to see what was going on. That’s when I spotted Maria Sharapova and Novak Djokovic right behind me also trying to get through security. The instinct was to let them go through quickly, but both were extremely pleasant and suggested that we stay in queue. Again, this can only happen during a mega event and that’s what makes them so very special.

That an event of this magnitude is still possible with fans present, that your country has built on the gains of Tokyo, are the best realisations one can take back from Birmingham. For me, it will be great to see an Indian win in hockey. We are now capable of beating Australia, or for that matter any team in the world

Why Birmingham 2022 scores over many multi-discipline events that I have covered is because, for the first time, para sports and able-bodied sports are integrated into the competition programme here at CWG. On Day 1 of the swimming competition, there were many finals in the evening, which included some from para swimming as well. BBC, the host broadcasters, had five-time paralympic champion Ellie Simmonds as an expert and it was a step forward in trying to recognise para sport as an extension of mainstream sport rather than being something different. The same will be happening with para table tennis where our very own Bhavina Patel is expected to win a medal.

“It is indeed a major step forward for our sport. Para sport is actually parallel sport as Deepa Malik, president of the Paralympic Committee of India, always says. It is not sport for the disabled or anything like that and when you see para sport and able-bodied sport integrated in a major event, it gives you a very good feeling,” says Bhavina.

With 136 gold medals for women and 134 for men, Birmingham is actually a games of many firsts. I don’t remember if this has happened before and must say it is exactly what the 2000 International Olympic Committee (IOC) reforms commission had envisaged. In Tokyo, we had seen a 50-50 division between events for men and women and the effort has been to ensure equal play for men and women. With two extra gold medals on offer for women’s sport, it is a step in the right direction.

In the middle of all this, the competition is also a celebration of fans and people. For the two years of Covid, which had inflicted multiple lockdowns and hardship on men and women, CWG is a breath of fresh air. Covid is still around, but there is also light at the end of the tunnel. People are permitted to go to stadiums and enjoy sport, go to restaurants and relax over a drink, and travel to venues to see their favourite stars in action. As I write this piece at 6AM local time, I can see more than 50 young boys and girls in front of the main ticket office clicking photos and enjoying themselves. The fact is that these games are a reunion of people and that’s what is of paramount importance to everyone here. Retail businesses are having a field day and taxis aren’t even available in one go! From Edgbaston, it took me 40 minutes to get an Uber back to the hotel, something that usually takes five-10 minutes on a normal day.

Now the only thing that remains is for Indian athletes to punch above their weight and get us 50-plus medals despite shooting not being part of the calendar here in Birmingham. If that happens, it can be the perfect games in every sense and a step in the right direction in the midst of Covid. With the weightlifters led by Mirabai Chanu starting off superbly, this could well be a reality a week from now.

That an event of this magnitude is still possible with fans in the stadiums, that your country has built on the gains of Tokyo and is taking strides towards becoming a multi-sporting nation, are the best realisations one can take back from Birmingham. And for me personally, it will be great to see an Indian win in hockey if that happens. We are now capable of beating Australia, or for that matter any team in the world, and it is time we started doing so. We have never beaten the Aussies at CWG and Manpreet Singh and PR Sreejesh will be hoping to rewrite the history books here. As a fan of Indian sport, it is part of my wishlist. Ultimately, we are all fans of sport who live it to feel better. To live better and dream of an India that will be considered a powerhouse in the global sport hierarchy.