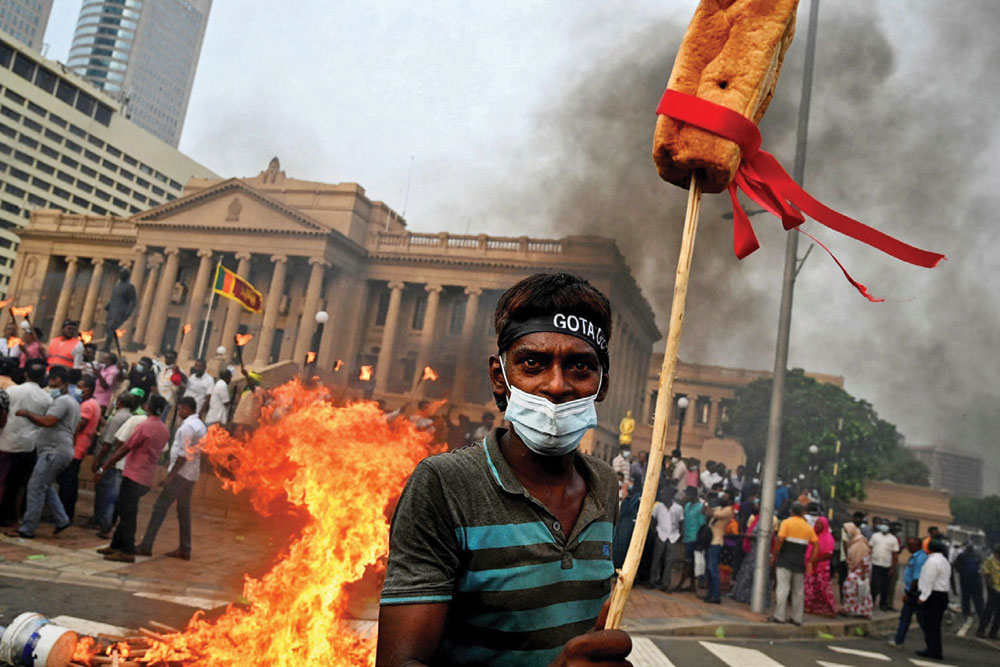 A protest outside the president's office in Colombo on March 15, 2022 (Photo: AFP)


When you live in a hostage state, neither your will, struggle, nor the precarity of your existence, moves your captors.

Sri Lanka is in the midst of a harrowing economic implosion. Children sleep on light stomachs, trishaw drivers lay sprawled on pavements through the night as they await the next fuel delivery at the station, and patients line hospital wards that have no medicine for them.

The cities are an eerie mix of empty and overfull. Colombo’s streets are so dead, it is as if the place has lost half its population in an apocalyptic event. In Galle, folks who might otherwise ride their motorcycles into work stand on the rear bumpers of packed state buses, clinging to the rubber beading on the back window. They try not to imagine what might happen if the rusting metal or the tips of their straining fingers give way. On the morning commuter trains, people who work office jobs hang, white-knuckled, to the front of the engine.

Parents are going without food so their kids can eat. Children are having their education disrupted for the third year running. If you have an accident, develop a sudden illness, have your home burgled by the ever-growing demographic whose days are ruled by desperation, then sorry. Sri Lanka has nothing for you right now.

The state has no money. Friends, neighbours, and relatives who might otherwise help, have too little even for themselves. There was an economic downturn after the 2019 Easter attacks. Then two crippling pandemic years. Financial buffers have been exhausted. One more shock and your family may be destitute. You don’t own the place where you live? The owner is threatening to have your family out on the street. Their own families are scrambling for basics.

In the halls of power, it is as if none of this is happening. None of this has happened to them.

In the 24 hours after he was sworn in, new President Ranil Wickremesinghe made clear his priorities. From the pre-dawn military raid he ordered on the protest camp outside the presidential secretariat, videos of vicious beatings emerged, including assaults on journalists documenting the violence. Some were told by security forces to delete the footage captured on their phones. Others were essentially abducted and could not be found for many hours, even in the police stations to which many of those arrested had been taken.

This was on the night of July 21, a mere 12 days after the extraordinary public protests of July 9, when despite the government’s desperate attempts to prevent people from flocking to Colombo, hundreds of thousands were on the streets. They stormed the presidential secretariat, the presidential palace, and the prime minister’s official residence, in what was widely understood to be a symbolic reclaiming of the power the state denied its public.

Wickremesinghe called the movement a “fascist” force. Once he took the reins of the presidency, he put in place a state of emergency that swells a president’s already grotesquely outsized powers. The raid on the protest camp was merely the first phase of systematic attempts to shut down the people’s movement. In the subsequent week, activists and unionists who had been central to the protests were tracked down and arrested, the emergency laws allowing the state to act with virtual impunity.

The chief whip of Wickremesinghe’s government would soon call the protesters “terrorists”—a callback to the Civil War, in which Tamils who dared to question the state were beaten with this exact stick. It had also been applied to the Muslims the state bore down on following the Easter attacks. Wickremesinghe, who had been installed as president despite not having won even his own seat in the last parliamentary polls, would continue to consolidate his power by force, in the absence of legitimacy.

What can regular people do against such fearsome, unrelenting power? What can be done when the ruling class sits so deep in each other’s pockets, manoeuvre so cynically against the people they are sworn to serve, and weaponise constitutional functions to serve only their political ambitions?

For so long, Wickremesinghe had been the suit-and-tie-wearing globalist who stood at odds with the Rajapaksas’ rabid Sinhalese nationalism. But of course, these are the higher reaches of Sri Lanka’s political class, and no one is ever whom they claim. Gotabaya, the former president the protesters ousted, had been a US/Sri Lankan dual citizen until his entry into politics forced him to give up his US passport. His elder brother Basil held on to his US citizenship through the catastrophic stint as finance minister for a chunk of Gotabhaya’s presidency.

Just as the Rajapaksas’ nationalism was a politically-convenient brand, so too Wickremesinghe’s internationalism, and his affection for democracy and human rights. In the past weeks, he has stepped gleefully into the autocrat-shaped breach, his decisions betraying the same disdain for the public that had seen Gotabaya put catastrophic economic policies into play.

Through the second half of 2021, Gotabaya had backed a central bank governor whose sole strategy seemed to be printing money and using up dollar reserves, in the face of full-throated warnings from experts that this would only lead to a devalued Sri Lankan rupee and economic ruin. In July last year, one Indian rupee was worth approximately 2.6 Sri Lankan. Now, that is up above 4.5.

But this was only the state’s attempt to reverse a crisis that Gotabaya himself had set into motion. In 2019, as soon as he took office, he cut taxes across the board, largely at the behest of corporate and professional groups, emptying state coffers. Months later, to preserve whatever little foreign exchange the government had, he told farmers they were not allowed to import chemical fertiliser anymore, and must instead be organic. Sri Lanka’s agriculture sector had been dependent on chemical fertilisers for 60 years.

Reflected in Gotabaya’s policymaking was the disdain that wealthier groups who helped bring him to power have long felt towards ordinary Sri Lankans. These are the same people who back a Wickremesinghe presidency for the sake of stability. For them, the nation’s “masses” only make entitled demands from the state. They want easy jobs, live without ambition, and don’t work hard enough. If a better economy is built, it must be they who bend their backs. This, in a country where, even among developing nations, the tax-to-GDP ratio was staggeringly low, long before the Gotabaya cuts.

The farmers were among the first to stage mass protests, many hailing from the southern villages that had turned out overwhelmingly for the Rajapaksas in the presidential elections in 2019, and the parliamentary polls in mid-2020. But now, leaders who had bet on business interests just before a pandemic hit had decided that food producers were an expendable appendage of the economy. In the months since, farmers have argued that not only did they themselves not know how to produce profitable yields using organic produce, but that such knowledge did not exist in Sri Lanka at all, so poor were government attempts to “educate” them.

Two growing seasons were sacrificed until the chemical fertiliser ban was lifted. By that stage, the Lankan rupee had dived so deplorably, that farmers could not afford to buy imported fertiliser stocks anyway. Even those that own fields were forced to abandon them, short of funds to buy seeds and fertiliser—the nation short of the fuel that runs their machines. Vast tracts of farmland now go unused, because of the knock-on effects of a president’s attempts to appease his wealthy lobby group. They are not among those having to skip meals, nor make serious cuts to their children’s nutrition, in an economy that has seen food prices double in 2022.

The next cultivation season is not expected to produce anywhere near its usual yield. Even the food that is grown is not transported to its usual markets, some of it is left to rot in distribution centres. In a tropical island nation with an abundance of fertile land, and which has just experienced better-than-average southwest monsoon rains, famine-like conditions may soon take hold.

While the nation lives in dread, not knowing how much barer their cupboards will become, not knowing where to get the next round of vital medicines, not knowing what fresh hardship the child in the belly of the woman who cannot gain weight will be born into, an unelected president continues to consolidate power through brute force.

Ambulances struggle to get fuel, education is in disarray, and people keep dying in the miles-long fuel queues, but when you live in a hostage state, neither your will, nor your struggle, nor the precarity of your existence, moves your captors. And you wonder how long you must beat against the walls of power.